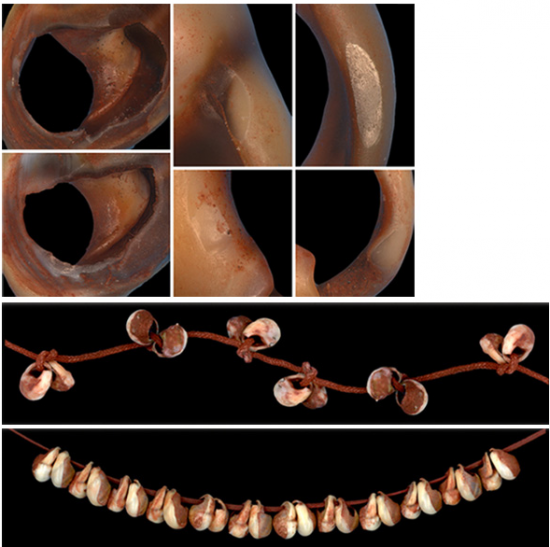 A close examination of shell beads from Blombos Cave (top) suggests that ancient humans there started off with one style of jewelry (bottom) and then shifted to another (middle) over the course of 3000 years. Credit: Marian Vanhaeren

The 2013 Academy Awards were, as always, as much about making appearances as about making films, as red carpet watchers noted fashion trends and faux pas. Both Jessica Chastain and Naomi Watts wore Armani, although fortunately not the same dress. And Best Supporting Actress Anne Hathaway switched from Valentino to a controversial pale pink Prada at the last minute because her original dress looked too much like someone else's. Of course, no actress would be caught dead wearing the same style 2 years in a row. A new study of ancient beaded jewelry from a South African cave finds that ancient humans were no different, avoiding outdated styles as early as 75,000 years ago.

Personal ornaments, often in the form of beads worn as necklaces or bracelets, are considered by archaeologists as a key sign of sophisticated symbolic behavior, communicating either membership in a group or individual identity. Such ornaments are ubiquitous in so-called Upper Paleolithic sites in Europe beginning about 40,000 years ago, where they were made from many different materials—animal and human teeth, bone and ivory, stone, and mollusk shells—and often varied widely among regions and sites.

Even more ancient personal ornaments go back to at least 100,000 years ago in Africa and the Near East. But this earlier jewelry seems less variable and was nearly always made from mollusk shells. So some archaeologists have questioned whether these earlier ornaments played the same symbolic roles as the later ones, or even whether they were made by humans at all.

In a new study in press at the Journal of Human Evolution, a team led by archaeologist Marian Vanhaeren of the University of Bordeaux in France claims to have found evidence of a relatively sudden shift in the way that shell beads were strung. The beads were found at Blombos Cave in South Africa in archaeological layers dated between 75,000 and 72,000 years ago, during a time period marked by four distinct layers of artifacts called the Still Bay tradition. This tradition includes bone awls and sophisticated stone spear points and knives, as well as beads from jewelry: sixty-eight specimens of the southern African tick shell, Nassarius kraussianus, most found clustered together and thought to be part of individual necklaces or bracelets. All the shells are perforated with a single hole, and the team's microscopic studies—as well as experiments with shells of the same species collected near the site—have suggested that they were punctured with a finely tipped bone point.

To get an idea of how the shell beads were worn, Vanhaeren and her colleagues examined the wear (smoothing) around the perforations and on other parts of the shells. They then carried out additional experiments in which N. kraussianus shells were shaken together for many hours at a time and exposed to a diluted vinegar solution meant to mimic human sweat, among other tests, while strung together in various ways.

By stringing the shells themselves in various configurations, the team identified six possible ways that the beads could have been worn, including tying a knot around each shell, stringing them in a continuous row, braiding them with two strings at a time, and reversing the orientations of the shells to each other. Then, by analyzing the wear on the shells caused by these arrangements, Vanhaeren and colleagues determined just how the beads were strung. "In the lower [older] layers, the shells hang free on a string with their flat, shiny [sides] against each other," Vanhaeren says. But like all fashions, that one didn't last long: In the two upper, younger layers, "the shells are knotted together two by two, with their shiny side up" (see photos).

The team concludes that this is the earliest evidence of a shift in "social norms" or "customized style," a change that "parallels the many similar changes in symbolic norms observed among more recent and historically known human societies." It is not yet clear whether the earlier residents of Blombos changed their own fashion ideas, or if they were later replaced by another group of early humans who liked to wear their beads differently. Either way, the findings suggest that these beads, like jewelry today, served a fully symbolic function, the team concludes.

It's an "impressive in-depth study" filled with "fascinating detail," says Olaf Jöris, an archaeologist at the MONREPOS Archaeological Research Centre in Neuwied, Germany. Stanley Ambrose, an archaeologist at the University of Illinois, Urbana-Champaign, adds that the team's "basic conclusions"—that there was a change in style, or at the very least a change in technique, during the Still Bay period—"seem sound." He adds that the shell beads come from a time when overall cultural innovation among early humans appears to have been speeding up, as evidenced by the short-lived nature of the Still Bay itself, which was soon replaced with other stone and bone tool styles.

But Jöris and some other archaeologists caution against drawing too many firm conclusions from the work. Randall White, an archaeologist at New York University in New York City, has questioned—on the basis of experiments that he and his students carried out—whether the perforations in the Blombos beads were actually made by humans. He suggests that the holes were the result of burial damage, trampling, or even erosion by acidic soils. Jöris says the researcher's assumption that the shell beads were strung as necklaces or bracelets could be wrong, because they did not consider the possibility that they were sewn onto clothing, a cultural style often found in the European Upper Paleolithic. That arrangement could have caused wear patterns that the team did not consider, he says.