A 6,000-year-old "eco-home" has been discovered close to Stonehenge, archaeologists have revealed.

The shelter - in a hollow left behind by a fallen tree - at Blick Mead was used over a 90-year period from 4336 BC, it is believed.

Archaeologist David Jacques, said: "They... used the stump of the tree, about three metres high, as a wall."

The finds are being shown to United Nations heritage experts, who are currently visiting Stonehenge.

Archaeologists are concerned a planned 2.9km tunnel being considered for the nearby A303 main road will damage the site.

Discoveries have also shown stones were warmed up by the Mesolithic Period inhabitants and used in a hearth to emit heat in the earthy snug.

Mr Jacques, a senior research fellow at the University of Buckingham, has worked at Blick Mead for over a decade, making a number of discoveries about the inhabitants.

The tree stump created a wall height similar to a "modern bungalow".

"They've draped probably animal skins or thatch around the basin and connected it to a post so it's a very comfortable snug little place," he said.

The wooden wall of the hollow was lined with flints and the large earthy pit created by the tree root lined with cobbles and decorated with "exotic" stones from outside the area. 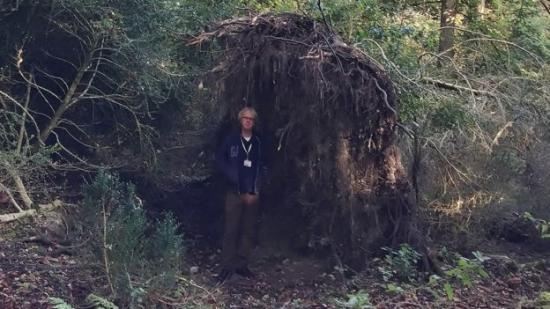 "There are some clever and sophisticated things going on, the hot stones that they put into this little type of alcove wouldn't have been on fire," explained Mr Jacques.

"It looks more like these people have been using these hot stones as a type of storage heater so that you've got a lot of warmth coming off them." 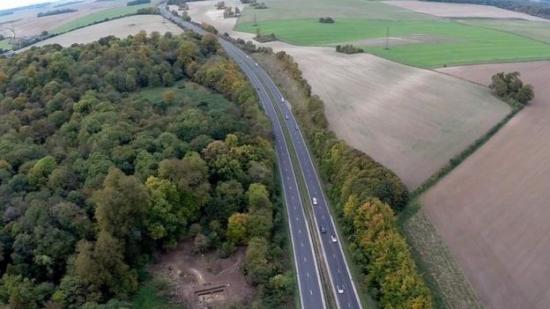 The Blick Mead dig site is about 20m from the A303, here shown to the left of the road - QinetiQ

Mr Jacques will meet the UN experts later to ask for the route to be moved closer to Salisbury and for hydrological assessments to be made.

"It's very likely the water flow would be reduced in and around the site," he said.

"This is massively important for reconstructing what the landscape would have looked like."

If the tunnel is built near Blick Mead, there are fears it would damage archaeological remains - Andy Rhind-Tutt

Andy Rhind-Tutt, former mayor and chairman of Amesbury Museum and Heritage Trust said: "I sincerely hope the team delivering the long-awaited A303 improvement look seriously at an alternative alignment south of Salisbury and away from this unequalled archaeological landscape.

"It would be criminal to destroy such a rich heritage and connection with our ancestors for the sake of blocking the view to the passing public of Stonehenge."