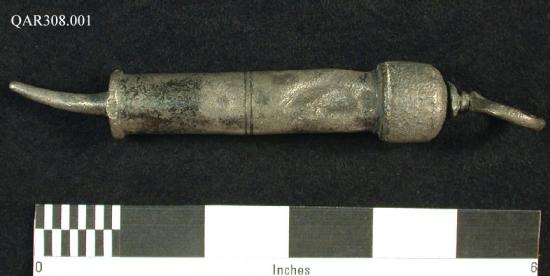 This urethral syringe was used to treat syphilis, a sexually transmitted disease that can be fatal. Chemical analysis shows that it contained mercury, which was commonly used to treat people with syphilis during the early 18th century. Although mercury may alleviate some of the symptoms taking too much of it can be fatal.  Credit: Photo credit: North Carolina Department of Cultural Resources

Archaeologists are excavating the vessel that served as the flagship of the pirate Blackbeard, and the medical equipment they have recovered from the shipwreck suggests the notorious buccaneer had to toil to keep his crew healthy.

Blackbeard is the most famous pirate who ever lived. His real name was Edward Teach (or possibly Thatch), and his flagship, the Queen Anne's Revenge, was formerly a French slave vessel named La Concorde de Nantesthat Blackbeard captured in November 1717. Blackbeard was able to capture this ship easily because much of its crew was either sick or dead due to disease.

A few months into 1718, the Queen Anne's Revenge ran aground on a sandbar at Topsail Inlet in North Carolina. Blackbeard abandoned much of his crew at that point, leaving the site with a select group of men and most of the plunder. He was killed in battle later that year.

The wreck of the Queen Anne's Revenge was rediscovered in 1996 and has been under excavation by the Queen Anne's Revenge Project. Archaeologists have recovered many artifacts, including a number of medical instruments. These artifacts, combined with historical records, paint a picture of a pirate captain who tried to keep his crew in fighting shape.

"Treating the sick and injured of a sea-bound community on shipboard was challenging in the best of times," Linda Carnes-McNaughton, an archaeologist and curator with the Department of Defense who volunteers her time on the excavation project, wrote in a paper she presented recently at the Society for Historical Archaeology annual meeting.

The people on a ship like Blackbeard's would have had to contend with many conditions, including "chronic and periodic illnesses, wounds, amputations, toothaches, burns and other indescribable maladies," Carnes-McNaughton said.

In fact, maintaining the crew's health was so important that when Blackbeard turned the Queen Anne's Revenge into his flagship, he released most of the French crew members he had captured, but he forced the ship's three surgeons to stay, along with a few other specialized workers like carpenters and the cook, Carnes-McNaughton said.

She noted, however, that "The Sea-Man's Vade Mecum" of 1707,which contained the rules that seafarers were supposed to follow, had a provision stating that surgeons could not leave their ship until its voyage was complete.

Carnes-McNaughton investigated both the La Concorde de Nantes'crew muster, which is the document that lists crew members' names and salaries, as well as court records to learn more about the surgeons Blackbeard captured.

The ship's muster indicates that La Concorde de Nantes'surgeon major was a man named Jean Dubou (or Dubois), from St. Etienne. Before he was captured by Blackbeard, Dubou was being paid 50 livres for his work on the ship's voyage. The second surgeon was Marc Bourgneuf of La Rochelle, who was paid 30 livres for the voyage.

The third surgeon was Claude Deshayes, who was listed as a gunsmith on the muster and paid 22 livres for his work. The muster also names a surgeon's aide,  Nicholas Gautrain, who was paid 12 livres. Although he is named on the muster, Gautrain is not mentioned in court records.

When archaeologists excavated the Queen Anne's Revenge they found a number of medical instruments, some with marks that indicate they were manufactured in France. Carnes-McNaughton said that Dubou and his aides were required to supply their own medical equipment, and Blackbeard likely captured this equipment when he captured the surgeons.

Among the finds was a urethral syringe that chemical analysis indicates originally contained mercury. Carnes-McNaughton told Live Science that this would have been used to treat syphilis, a sexually transmitted disease. "Eventually the mercury kills you," she said, explaining that the patient could suffer mercury poisoning.

Archaeologists also found the remains of two pump clysters. These would have been used to pump fluid into the rectum, allowing it to be absorbed quickly, Carnes-McNaughton said. It's not clear exactly why this would have been done, but there are plans to analyze the clysters to find out what material they contained before the ship was wrecked.

An instrument called a porringer was also found, which may have been used in bloodletting treatments, Carnes-McNaughton said. People in the early 18th century believed that bloodletting could cure some conditions and a modern-day form of the treatment is still used for a few conditions.

Carnes-McNaughton said she is going to compare the medical equipment from Queen Anne's Revenge to those found on other wrecks.

But although the captured surgeons had medical equipment, Blackbeard would have still needed a supply of medicine to treat his crew. He got somein 1718, after he spent a week blockading the port of Charleston, South Carolina. Blackbeard captured ships that tried to get past him, holding their crew and passengers hostage.

When it came time to parley with the governor of South Carolina, a chest of medicine was demanded. Blackbeard threatened that he "would murder all their prisoners, send up their heads to the governor, and set the ships they had taken on fire," if the governor didn't deliver the medicine chest, writes Capt. Charles Johnson, who published an account of Blackbeard in 1724. The governor promptly complied and the prisoners were released.

In the end, Blackbeard's efforts to keep up his crew's health didn't change the pirate's own fate when he was hunted down in November 1718 by the Royal Navy.

Blackbeard was in good enough shape that he is said to have put up a terrific final fight while trying to board an enemy ship. "He stood his ground and fought with great fury, till he received five and 20 wounds, and five of them by shot," Johnson wrote. "At length, as he was cocking another pistol, having fired several before, [when] he fell down dead."