A Pictish symbol stone built into the wall of a Highland farm building has been recorded by archaeologists.

The markings show a beast, crescent, comb and mirror. 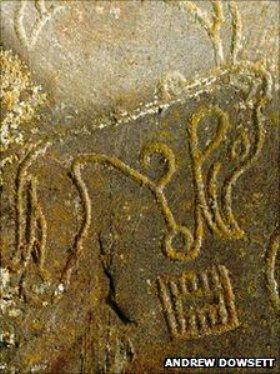 Archaeologist Cait McCullagh said it was a mystery how it had taken until this year for the stone to be officially recorded.

She said it also suggested that more Pictish stones have still to be documented on the Black Isle where the beast was recorded.

Ms McCullagh, the co-founder and director of Archaeology for Communities in the Highlands (Arch), said the symbol stones probably dated from the 5th to 7th centuries AD.

She said it was unusual to find such carvings on the north side of the Moray Firth.

A lack of weathering on the Pictish beast may suggest the stone had been kept inside, or had been buried, for a long period before it was placed in the wall of the byre.

Isobel Henderson, an expert in the field of early medieval sculpture, came across the Pictish beast stone earlier this year and alerted Highland Council archaeologists.

Easter Ross-based Ms McCullagh was also notified and she confirmed the markings as Pictish.

She also went on to identify a Pictish symbol stone in the wall of a nearby farmhouse with markings thought to represent goose feathers, or fish scales. Harling obscures most the carving.

Both stones are on private properties built in the 19th Century and owned by the same family for about 50 years until two years ago.

Ms McCullagh said the relics were never mentioned during a recent local heritage project that had asked people to suggest sites of archaeological and historical interest.

The Pictish beast and goose, or fish, markings have been recorded by Highland Council's Historic Environment Record. 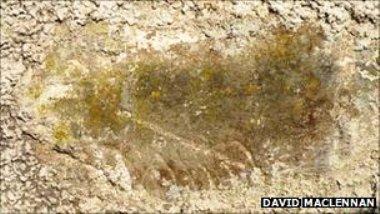 Ms McCullagh said: "It is a mystery why it has taken so long for the stones to come to our attention.

"It is also exciting to think that there are maybe more still to be found.

"We are always encouraging people to put their Pictish specs on and look out for stones in church yards and dykes."

The Picts lived in north and east Scotland in the 3rd to 9th centuries AD.

According to Highland Council, inscriptions suggest that the Picts spoke a language closely related to both Welsh and Gaelic.