An ancient Phoenician port has recently been discovered in Mina El Hosn area of Beirut, in a plot (#1893) located behind the Hotel Monroe. The area of approximately 7500 square meters is owned by Venus, a real estate firm that plans to erect 3 large skyscrapers on the terrain.

Since five months ago, a team from the General Directorate of Antiquities headed by expert Hisham Sayegh has undertaken excavations in the area, resulting in the discovery of numerous archaeological findings, including two parallel canals carved in the rock within a distance of 120 meters from the beach in the old city of Beirut, part of the Phoenician port dating back to the fifth century BC. (hence the name Mina El Hosn, suggesting the presence of a small port on the Gulf.) 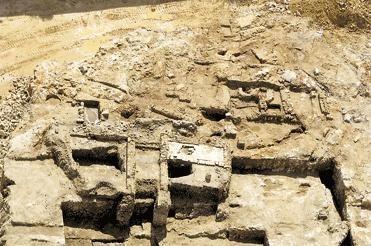 Based on old historical references, a port located in the region was said to have actually been consecutively covered up through the years, starting with the construction of roads by the Ottomans, followed by the construction of Hotel Normandy by the French, up to the period of the Lebanese civil war during which a trash landfill was established in the area. In his book "Beirut Our Memory", Fouad Debbas had mentioned that the old Roman city of Beirut extended until this port. The excavations showed that the port was buried between the first and second centuries AD, with this Phoenician port believed to be the first to be discovered in Beirut.

Other Roman urban infrastructures were also discovered during the excavations,including two large sandstone walls part of a huge building, believed to have belonged to the foundations of a temple. One of them has a length of 25 meters. These findings date back to the beginning of Roman rule to Beirut, revealing once more the city''s importance that made the Roman emperors build up a big city (Metropolis) and reside in this particular region, with large structures such as the Hippodrome and the Forum and other luxury villas, theater, tower, fortress, baths and the wrestling ring and streets at the beach Port... all belonging to the first and second centuries AD. All of these features are part of the construction project in the Imperial Beirut, indicating the exceptional position of Beirut as a Roman colony.

Other archaeological finds as well have emerged from different periods, namely: urban landmarks from late Ottoman period (house and wells), and a stone quarry from the limestone sedimentary rock used to built most the urban discoveries belonging to the second half of the first millennium BC, the Phoenician and Persian periods, Hellenistic.

The discovery of the first Phoenician port in Beirut along with the foundations of the Roman temple did not thrill the construction firm Venus all that much, as this will delay or maybe even put to stop the process of building their project on the plot. They have also prevented the media from entering or filming the area. Beirut has lost most of its archeological treasures in the Solidere area, and many fear the port will end up completed bulldozered before crucial historical research has been carried out properly.

Venus real estate company is striving to build in Beirut a super construction and in the process destroying the ancient Phoenician Port of Beirut that was discovered in the port area of ​​the fort (Mina El-Hosn). The company did not hesitate, in non-media events, to present conflicting “scientific” fallacies and to use “archaeologists” to reach its goal.

A few weeks ago, the archaeologist Hisham Sayegh decided to expose the case of the discovered Phoenician Port of Beirut, which is characterized by two rock carved launchers measuring more than 4 meters (about 13 feet) each.  No such launchers have ever been found in Lebanon, a country of ancient ports, before today. Mr. Sayegh confirms that the port is Phoenician and dates back to the fifth century B.C.  Regardless of this fact, the real estate company decided to refute all the archaeological data and topography by using the report of the “expert” Hans Corverz to prove that the area never had a port, and was not used by the Phoenicians [Note: the area is called Menit El-Hosn which means, the Port of the Fort].

The company felt that it was not logical for the launchers to be of a seaport because “the sea is about 231 meters (about 263 yards) from the site, and the rocky ground rises at least 8 meters (about 8 yards and 27 inches) above the site from the sea, according to current topographic survey.”  Herewith, it is imperative to clarify that archaeologists, in their studies, do not rely on the present level of the Mediterranean Sea because of in the past ages, its level was less high.  Further, it spread far inland much greater than it is today. The world French scholar, Christophe Morang, emphasized in his study, with the British Museum mission, that the Phoenician port of Sidon lies currently under markets area behind the Khan El-Franj because the beach front was there!

Anthropology - Archaeology's programs available online learn when and where you want.