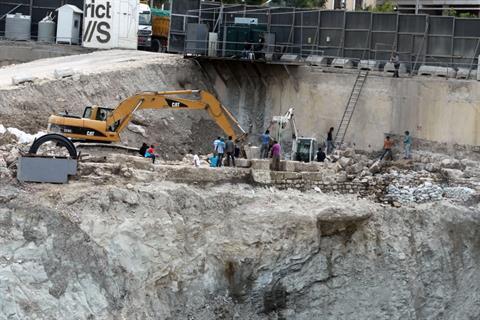 A caterpillar demolishes part of the ruins excavated on the site of project District S in downtown Beirut, Tuesday, May 14, 2013. (The Daily Star/Hasan Shaaban) 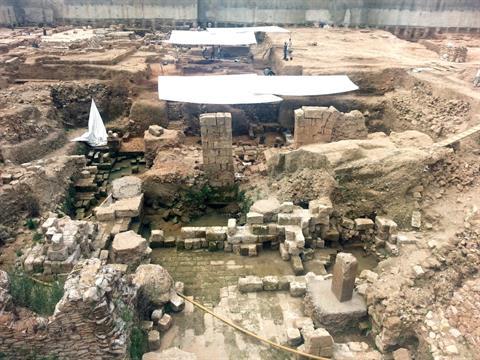 Roman ruins archaeologists believe contain the southern gate of Roman city on the site of project Landmark in Riad Solh in Beirut, Sunday, May 12, 2013. (The Daily Star/Stringer)

Archaeologists said this week that after working for seven years on Downtown’s Riad al-Solh Square they have reason to believe that ruins there include the remnants of a gate that served as a main entrance to the ancient Roman city that once occupied modern Beirut.

Archaeologists said that if a link between the Roman gate of the ancient city, dating back to the 1st century A.D., and the ruins can be confirmed, it would constitute one of the most significant archaeological findings in Lebanon.

“The remnants uncovered on the site, among others, have various characteristics that we believe are part of the southern Roman gate of the ancient city of Beirut,” one archaeologist with knowledge about the excavations said on condition of anonymity, as he wasn’t authorized to speak about the findings yet.

Findings from archaeological digs on the site of the $149 million project in Riad al-Solh Square are not supposed to be disclosed, according to regulations from the Culture Ministry’s Directorate General of Antiquities’ orders.

Similar to other excavation sites in Downtown Beirut, this one in particular brought a halt to the Landmark Project, a multipurpose development initiative announced in 2005 and designed by renowned French architect Jean Nouvel.

While media outlets and photographers are not allowed to enter such sites due to the DGA’s policies, The Daily Star managed to take a photo of the alleged Roman gate of Beirut.

Culture Minister Gaby Layyoun and DGA Director Asaad Seif paid an unanticipated visit to the site along with a group of archaeologists over the weekend. According to participants at the meeting, discussion focused mainly on the importance of the archaeological findings and the future measures the DGA should undertake for the site.

“Although Directorate General of Antiquities’ President Asaad Seif said it was necessary to continue digging on the location where the Roman gate was found, Layyoun disagreed and said the Landmark Project must be revived,” the archaeologist said.

But the archaeologist said that more work needed to be done to unearth what is left of the ruins and to understand their historical importance.

Originally built in the Hellenistic era 2,300 years ago, Dura-Europos functioned as a Roman border city near the Euphrates River, known as the village of Salhiye in modern day Syria.

Meanwhile, the destruction of other archaeological findings in Downtown Beirut continued this week after the Culture Ministry approved a demolition order for a number of other ancient sites just blocks away from Riad al-Solh Square.

A bulldozer razed through part of an archaeological site Tuesday afternoon. Officials on site said the order came after the culture minister approved another project, called District S, which requires the sites of some ruins to be overhauled and reconstructed.

“The minister approved the continuation of the [District S] project’s work today and the [area of the] ruins will be included the project,” said Ziad, an official supervising the excavation work.

When The Daily Star reporters attempted to check on the site, they were forcibly pushed out by DGA employees.

“Get away before I break the camera, I am on strict orders from the ministry not to let anyone in here,” one man said as he closed the site’s gate, behind which a bulldozer continued its work.