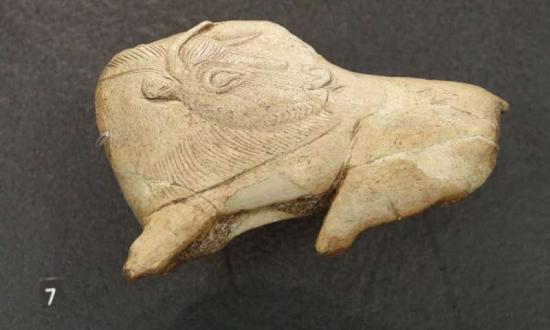 Preserved spear thrower hook dated to about 12,500 years ago from the site of La Madeleine, in France. Credit: Wikimedia commons.
New research by an archaeologist at the University of York suggests that betrayals of trust were the missing link in understanding the rapid spread of our own species around the world.
Dr Penny Spikins, of the University's Department of Archaeology, says that the speed and character of human dispersals changed significantly around 100,000 years ago.

Before then, movement of archaic humans were slow and largely governed by environmental events due to population increases or ecological changes. Afterwards populations spread with remarkable speed and across major environmental barriers.

But Dr Spikins, a senior lecturer in the Archaeology of Human Origins, relates this change to changes in human emotional relationships. In research published in Open Quaternary, she says that neither population increase nor ecological changes provide an adequate explanation for patterns of human movement into new regions which began around 100,000 years ago.

She suggests that as commitments to others became more essential to survival, and human groups ever more motivated to identify and punish those who cheat, the 'dark' side of human nature also developed. Moral disputes motivated by broken trust and a sense of betrayal became more frequent and motivated early humans to put distance between them and their rivals.

According to Dr Spikins, the emotional bonds which held populations together in crisis had a darker side in heartfelt reactions to betrayal which we still feel today. Larger social networks made it easier to find distant allies with whom to start new colonies, and more efficient hunting technology meant that anyone with a grudge was a danger but it was human emotions which provided the force of repulsion from existing occupied areas which we do not see in other animals. 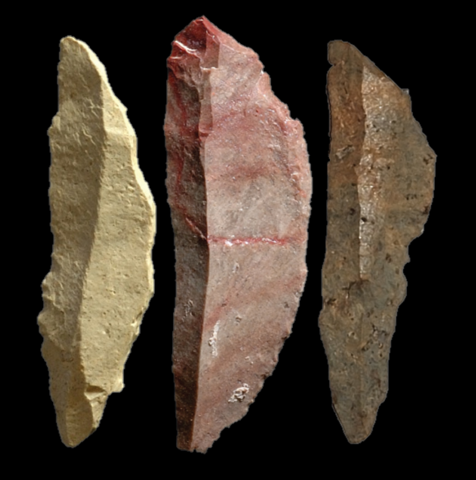 71,000 year old microblades from Pinnacle Point, South Africa. Credit: Simen Oestmo
Early species of hominin were limited in distribution to specific environments such as grasslands and open woodland. The expansion of Homo erectus out of Africa into Asia around 1.6 million years ago appears to have been caused by the need to find more large scale grasslands. By contrast, Neanderthals occupied cold and arid parts of Europe. All archaic species adapted slowly to new opportunities for settlement and were often deterred by environmental and climatic barriers.
After 100,000 years ago, however, dispersal into distant, risky and inhospitable areas became relatively more common compared with movements into already occupied regions. Most notably, the spread of modern human populations was not inhibited by biogeographical barriers. Populations moved into cold regions of Northern Europe, crossed significant deltas such as the Indus and the Ganges, deserts, tundra and jungle environment and even made significant sea crossings to reach Australia and the Pacific islands.

Dr Spikins argues that betrayals of trust resulting from moral disputes were a significant reason for such risky dispersals into apparently unwelcoming environments with a desire to avoid physical harm from disgruntled former friends and allies being a key motivation. Offenders and any allies within their social network would feel driven to get out of harm's way.

Dispersal pattern of humans after 100,000bp
She says: "Active colonisations of and through hazardous terrain are difficult to explain through immediate pragmatic choices. But they become easier to explain through the rise of the strong motivations to harm others even at one's own expense which widespread emotional commitments bring.

"Moral conflicts provoke substantial mobility—the furious ex ally, mate or whole group, with a poisoned spear or projectile intent on seeking revenge or justice, are a strong motivation to get away, and to take almost any risk to do so.

"While we view the global dispersal of our species as a symbol of our success, part of the motivations for such movements reflect a darker, though no less 'collaborative', side to human nature."