The 2014 Bethsaida excavations in Israel have uncovered a rare Judaea Capta coin. In an email toBible History Daily, University of Nebraska Omaha professor and excavation director Rami Arav revealed that the coin was issued by Herod’s great-grandson Agrippa II. Minted in 85 C.E. at Caesarea Maritima, the bronze coin depicts Roman Emperor Domitian on the obverse (front face of the coin) and a palm tree on the reverse (back face).*

Judaea Capta (“Judea captured”) coins were first struck under Roman Emperor Vespasian to celebrate the Romans’ suppression of the Jewish revolt (66–70 C.E.). The revolt was effectively quashed with the destruction of Jerusalem in 70 C.E., though thereafter the Roman army continued to stamp out the last of the rebels at such hideouts as Herod’s desert fortress at Masada. 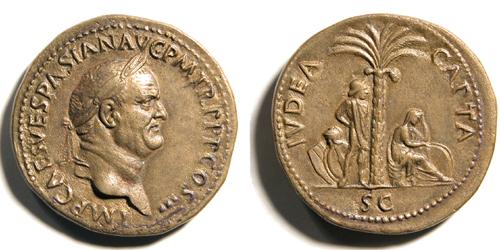 Minted in gold, silver and bronze, the Roman imperial Judaea Capta coins often feature on the reverse a palm tree, under which sits a female in mourning—symbols of the conquered Judea. Other varieties of the Judaea Capta series depict a male captive with his hands tied behind his back, the goddess Victory and Roman symbols of war. The legend reads IUDAEA CAPTA or IUDAEA DEVICTA (“Judea defeated”). The obverse of Judaea Capta coins feature a profile of the Roman emperor, most often Vespasian. Judaea Capta coins were minted for 25 years by Vespasian and his sons and successors Titus and Domitian.

Agrippa II, whose reign spanned the latter half of the first century C.E., was the last ruler of the Herodian dynasty. Having enjoyed the favor of the Romans, he issued provincial Judaea Capta coins that feature some of the same motifs as the Roman imperial series. The Judaea Capta coin from the 2014 Bethsaida excavations is a part of this unique series minted by the Jewish ruler.

Bethsaida was a small village on the northern shore of Galilee. It was at Bethsaida that Jesus, according to the New Testament, healed the blind man (Mark 8:22–25) and fed the multitude (Luke 9:12–17). Founded in the 10th century B.C.E., Bethsaida was located in the Biblical kingdom of Geshur. Excavations led by Rami Arav at Bethsaida have thus far uncovered the remains of an Iron Age city gate complex as well as the Hellenistic-Roman city.

The recently discovered Judaea Capta coin “connects Bethsaida with the great importance that the Roman Empire placed on the quelling of the revolt in Judea and Galilee,” said excavation codirector Carl Savage in a University of Nebraska Omaha press release.