Cemetery with over 100 tombs from 2200-650 BCE shows prehistoric Bethlehem was a rich town situated along important trade routes.
Philippe Bohstrom

Two openings leading into a vast catacomb that had been used for centuries, until ancient Bethlehem's mysterious collapse. Rodolfo Bioti
A vast prehistoric necropolis some 4,200 years old has been found near the Palestinian city of Bethlehem, proving for the first time that the city had existed and thrived in Canaanite times.
The burial ground, found by a team of Italian and Palestinian archaeologists, covers 3 hectares of the site called Khalet al-Jam'a. It was discovered to have more than 100 tombs dating from around 2200 BCE to 650 BCE. Unfortunately, many of the 100-plus tombs have already been destroyed by modern construction, or looted in the past.
“The finds confirm that there was a Canaanite town in Bethlehem. This had have never been proven before,” Lorenzo Nigro, head of the excavation and professor at Sapienza University of Rome, told Haaretz.
The site is located on the side of a hill, which often indicates that the hill opposite had been settled. (The hills around Jerusalem similarly abound with burials located to the north and west of the city.)
Canaanite burial practices
The tombs at Khalet al-Jam´a were artificially carved into the soft limestone rock, a burial practice common in the Levant and described in the Bible.
The earliest tombs in Khalet al-Jam´a date to the Early-Intermediate Bronze Age, and show the community had consisted of farmers/pastoralists. The evidence shows that by the Middle Bronze Age, the town, located in a fertile valley watered by natural springs, had been large.
The evidence at Khalet al-Jam´a supports the biblical description in Genesis of the practice of maintaining a family tomb enabling generations to be buried together; Hence the frequent biblical expression ‘to lie down, or be buried, with his forefathers’. 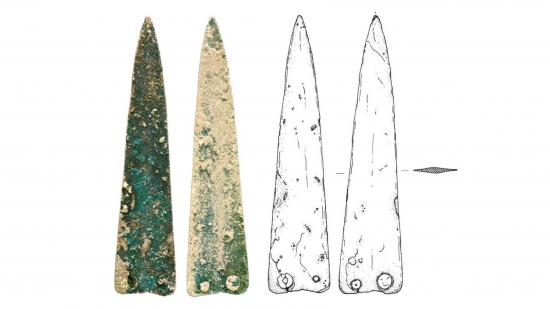 Bronze Age blade found at the Bethlehem necropolis.ROSAPAJ - Sapienza University Rome
The first person directly mentioned in the biblical tradition as performing a burial was Abraham, who spent a fair sum of money in order to obtain a suitable place as burial ground. According to the biblical account, the cave Abraham obtained became a family burial site, receiving his wife’s body and, eventually, his own, and those of Isaac, Rebekah, Leah, and Jacob.
The earlier, Bronze Age tombs at Khalet al-Jam´a bear no Israelite marks, but were Canaanite, says Lorenzo. “The tombs and burials are typically Canaanite," he says: The last interments in particular were of multiple burials, with up to 30 people per tomb, set on raised platforms in crouching displacement​.
Canaanite warriors in Egypt
The finds at Khalet al-Jam’a paint a picture of a prosperous, flourishing community. Lorenzo believes the city's wealth was probably due to its strategic location along important trade routes passing through Jerusalem and Hebron. (Jerusalem itself was recently demonstrated to be much older than previously thought: houses dating back 7,000 years were found in February).
Finds in the burials included sets of finely executed carinated bowls, huge and well refined Canaanite jars with two or four handles, small shouldered jars and bowls with everted (inside-out) rims, single-spouted lamps, as well as bronze daggers and spearheads, with typical spherical pommels on their handles.
In one tomb chamber, three bronze daggers, one socketed bronze axe and a bronze toggle pin was found. The longest dagger, measuring 21 cm, is Mycenaean type of the late Bronze Age, triangular in shape with large-headed rivets.
Such daggers were used for slashing. Evidently it had been imported, and this was clearly a warrior's grave, Lorenzo explains.
The same burial contained “Hyksos-like” signet amulets, known as scarabs. The signet scarab beetles were mounted on golden or bronze rings. 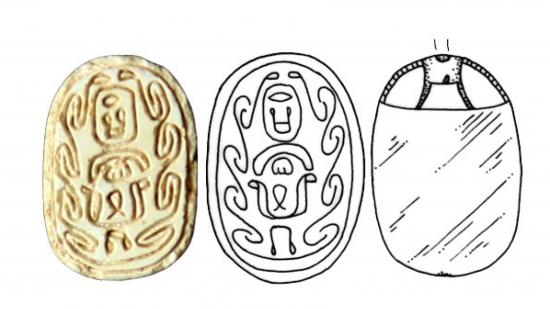 Egyptian scarab found at the Bethlehem necropolis.ROSAPAJ - Sapienza University Rome
“These finds are very important, since we know that from the 13th dynasty onwards, the Eastern Delta was ruled by 'Asiatic' pharaohs - Egyptian kings with strong links with Palestine, since their warriors were Canaanites with weapons and customs like those excavated in Khalet al-Jam'a,​" said Lorenzo.
Egyptians scarabs have been found all around the Levant, recently during the excavations of Azekah in the Shepelah.
“They show the direct interconnection and contiguity between the ruling class in southern Palestinian cities (Jericho, Sharuhen, etc.) and the Pharaonic court reigning in Tell el-Dab'a, ancient Avaris, the Hyksos capital of Egypt between 1750-1650 BC," said Lorenzo.
Judahite practices emerge
Later, during the Iron Age, the burial practice in Khalet al-Jam'a would change, to reflect a new tradition to those typical in Jerusalem.
“The difference is visible between the Middle and Late Bronze burials and the Iron Age ones, with areas of the tomb (niches or arcosolia) devoted to host the​ bodies,” said Lorenzo.
The difference was that Iron Age bodies lay alone. Vaults or chambers were cut into the rock for a single body, which was laid on a shelf. In the event of multiple burials, slots large enough to accommodate one body each were carved into the sides of the chamber at right angles to the walls.
What happened to the town in the later Iron II period can be surmised on the basis of a Judahite (LMLK) jar stamp found on the north slopes of the Basilica of Nativity,  showing that the city had come under royal Judahite administration as early as the 8th century BCE, and a bulla retrieved from Jerusalem mentioning Bethlehem shows it remained under Judahite influence even in the 7th century BCE. But when the Assyrian empire launched its second wave of campaigns in the region, conquering Judah and relocating its people, the burial site in Bethlehem was abandoned. Something had happened in ancient Bethlehem: the name disappeared from documentation for centuries, only to reappear some 2,000 years ago.