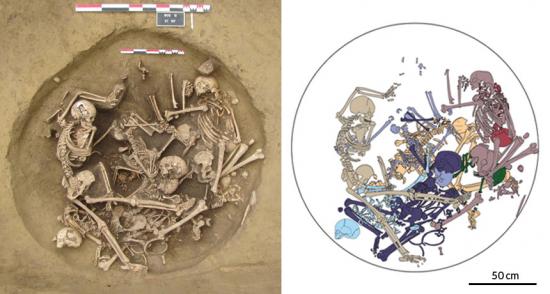 A circular pit excavated in France (left) contains the remains of eight people probably killed in a violent attack around 6,000 years ago. Seven severed left arms lay at the bottom of the pit. A diagram of the pit discoveries denotes bones of each individual in different colors.

A gruesome discovery in eastern France casts new light on violent conflicts that took lives — and sometimes just limbs — around 6,000 years ago.

Excavations of a 2-meter-deep circular pit in Bergheim revealed seven human skeletons plus a skull section from an infant strewn atop the remains of seven human arms, say anthropologist Fanny Chenal of Antea Archéologie in Habsheim, France, and her colleagues.

Two men, one woman and four children were killed, probably in a raid or other violent encounter, the researchers report in the December Antiquity. Their bodies were piled in a pit that already contained a collection of left arms hacked off by axes or other sharp implements. Scattered hand bones at the bottom of the pit suggest that hands from the severed limbs had been deliberately cut into pieces.

It’s unclear who the arms belonged to. All the Bergheim skeletons have both their arms except for a man with skull damage caused by violent blows. His skeleton lacks a left arm, the researchers say. They have been unable to determine whether that arm ended up in the pit.

Chenal’s group doesn’t know whether attackers targeted victims’ left arms for a particular reason. The arms could have been taken as war trophies, the team speculates.

Fractures and stone-tool incisions appear on left forearm bones from severed limbs found in a circular pit dating to 6,000 years ago.

Radiocarbon dating of two bones indicates that individuals in the Bergheim pit lived roughly 6,000 years ago. From 6,500 to 5,500 years ago, during what’s known as the Neolithic period, one of the many ways of disposing of the dead in farming communities throughout Central and Western Europe was in circular pits.

Discoveries of human and nonhuman bones, as well as pottery, in these pits go back more than a century. The Bergheim pit provides the first evidence that people killed and mutilated in raids or battles were sometimes buried in circular pits, too, says study coauthor Bruno Boulestin, an anthropologist at the University of Bordeaux in France.

Unusual deposits in Neolithic circular pits, such as attack victims and severed limbs at Bergheim, “may have been more common than previously expected,” says biological anthropologist Silvia Bello of the Natural History Museum in London, who did not participate in the new study. She suspects, for instance, that closer inspection of human bones previously found in circular pits elsewhere in Europe will reveal additional instances of violent deaths from a time when armed conflicts occurred between some communities (SN: 9/19/15, p. 8).

Bergheim’s brutalized victims spice up attempts to make sense of Neolithic circular pits. Many researchers regard these pits as remnants of storage silos that were put to other uses, possibly as receptacles for the bodies of people deemed unworthy of formal burials.

Others argue that a large proportion of pits were dug as graves for high-ranking individuals, whose servants or relatives were killed to accompany them. Or, slaves might have been killed and put in pits as displays of wealth or as sacrifices to gods.

Of 60 circular pits excavated in Bergheim in 2012 in advance of a construction project, 14 contained human bones. The researchers found skeletons or isolated bones of at least one to five individuals in each of 13 pits. The final pit contained the bodies and limbs described in the new paper.

Joints of severed arms and skeletons in that pit were well-preserved, indicating that all had been placed there at or around the same time with a minimum amount of jostling disturbance. The pit also contained remains of a piece of jewelry made with a mussel’s valve, a stone arrowhead, a fragment of a pig’s jaw and two hare skeletons. The skeleton of a woman who had been put in the pit later lay on top of a sediment layer encasing those finds.

Neither that woman nor human remains in the other Bergheim pits showed signs of violent death or limb loss.