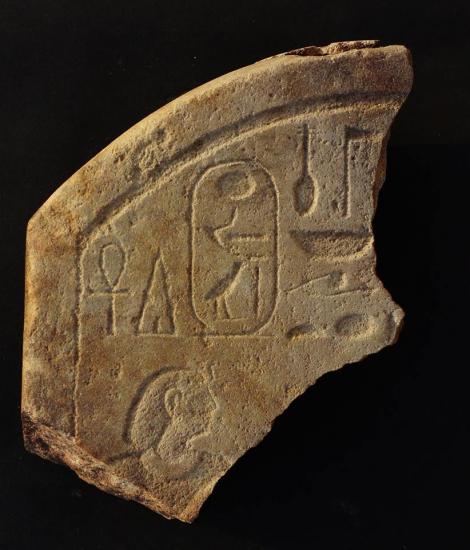 Fragment of a stele with the cartouche recording the name of the pharaoh Amenemhat IV (photo K. Braulińska, Berenike Project, PCMA)

Antiquities Minister, Dr. Mamdouh Eldamaty declared the discovery of two stelae that could be attributed, one to the Middle Kingdom and the other to the transition from the Second Intermediate Period to the New Kingdom. The discovery was made within the framework of the Berenike Project, run by the Polish Centre of Mediterranean Archaeology University of Warsaw, co-directed by Prof. Steven E. Sidebotham (University of Delaware) and Iwona Zych (PCMA UW), in the most recent season of fieldwork, which took place from 17 December 2014 to 11 February 2015, at the site of Bernike on the Red Sea coast.

Eldamaty added that the Polish Mission also succeeded in discovering three burials at the site that date back to the beginning of the Roman Age. Excavation in the front of the Serapis temple revealed sections of the facade on either side of the entrance, including wall decoration of the door frame that was identified as incised lotus and papyrus plants and a standing figure of a female deity. More importantly, two complete inscriptions in Greek were discovered standing in their original position, one next to the doorway and another one by the lateral north wall of the presumed courtyard. The inscriptions were dedications placed on blocks that had supported statues erected by their founders in Berenike’s main sanctuary. The older one was a dedication to Isis the Greatest Nurse Goddess, made by a secretary in AD 49; the other one was made also by a secretary, who identified himself as being in charge of an aromatics warehouse, in AD 112/113 (both inscriptions read by R.S. Bagnall). This is the first occurrence of a reference to an aromatics warehouse in Berenike, which was known in the Roman period for its trade in spices and incense. 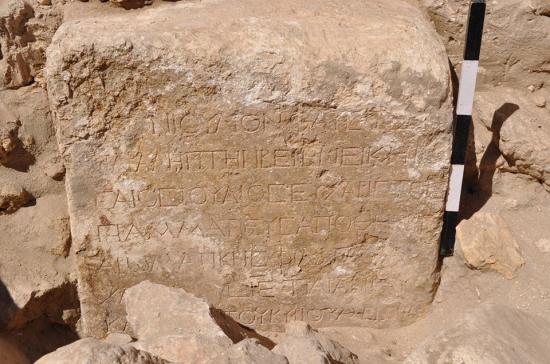 Inscription dedicated by a secretary in charge of an aromatics warehouse in Berenike to a prominent citizen of the city in AD 112/113; scale = 50 cm (photo S. E. Sidebotham, Berenike Project, PCMA)

Head of the Polish Mission further elaborated that continuing excavation of the presumed Hellenistic gate complex uncovered the lower part of a large rectangular shaft cut in bedrock (2.5 m deep without reaching the bottom) furnished with four chambers and a tunnel stretching some 6–7 m to the east as far as could be seen at the present stage of research.

The complex could have some relation to water-storing strategies and it had surely been used as a storage area. There has certainly been a beam mounted in one of the walls as a lifting device of some sort with a stone counterweight, which was found, to operate it. A large water pool and some installations of evidently hydraulic nature were found in associated contexts on the surface. 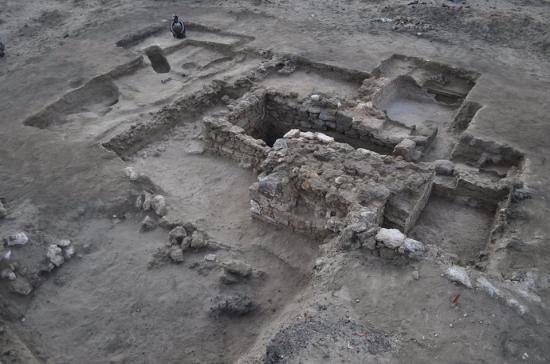 He added that a new site to the east of Berenike proper, discovered thanks to an analysis of Corona satellite imagery, contained the remains of the foundations of a long narrow building with three rectilinear podia . The function of this building has not been ascertained, but its date is clearly Augustan. 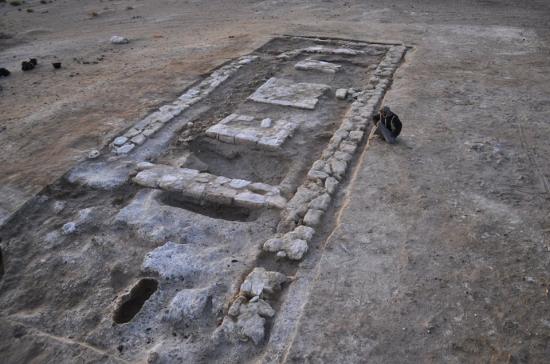 Foundations of a building with podia from the Augustan period, discovered to the west of the ancient city, general view from the northwest (photo S. E. Sidebotham, Berenike Project, PCMA)

The project continued fieldwork in the southwestern harbor of Berenike uncovering new data on workshop activities connected with metallurgy. It also returned to the northern part of the city proper, clearing a room with a niche belonging to a large architectural complex, which had been mapped by the magnetic survey of the site completed in this area in the previous season.