'Beneath the Surface: Life, Death, and Gold in Ancient Panama'

For more than a thousand years, a cemetery on the banks of the Rio Grande Coclé in Panama lay undisturbed, escaping the attention of gold seekers and looters. The river flooded in 1927, scattering beads of gold along its banks. In 1940, a Penn Museum team led by archaeologist J. Alden Mason excavated at the cemetery, unearthing spectacular finds—large golden plaques and pendants with animal-human motifs, precious and semi-precious stone, ivory, and animal bone ornaments, and literally tons of detail-rich painted ceramics. It was extraordinary evidence of a sophisticated Precolumbian people, the Coclé, who lived, died, and painstakingly buried their dead long ago.

Beneath the Surface: Life, Death, and Gold in Ancient Panama at the Penn Museum The new exhibition invites visitors to dig deeper, exploring the history, archaeological evidence, and new research perspectives, in search of a greater understanding of the Coclé people who lived from about 700 to 900 CE. Video footage from the original Sitio Conte excavation, video kiosks with opportunities to "meet" and hear from a range of experts, a centerpiece "burial" with interactive touchscreens—and more than 200 objects from the famous excavation—provide an immersive experience. The exhibition runs through November 1, 2015.

One massive burial, named "Burial 11" by the excavators, yielded the most extraordinary materials from the excavation. Believed to be that of a Paramount Chief, it contained 23 individuals in three distinct layers, accompanied by a vast array of grave objects. A to-scale installation of the burial serves as the exhibition's centerpiece, drawing visitors beneath the surface of the site. The re-creation features many artifacts displayed in the actual positions they were found, as well as digital interactive stations for further exploration.

The site of Sitio Conte is situated about 100 miles southwest of Panama City. When golden grave goods were exposed on the banks of the Rio Grande de Coclé, the Conte family, owners of the land, invited scientific excavation. The Peabody Museum of Harvard University carried out the first investigations in the 1930s. In the spring of 1940, J. Alden Mason, then curator in Penn Museum's American Section, led a Penn Museum team to carry out three months of excavations.

Diary entries, drawings, photographs, and color film from the excavations set the story of the research in time and place. New excavations in Panama, most recently at nearby El Caño, conservation work and laboratory analyses, and ongoing research on Coclé and neighboring Precolumbian cultures, adds to a growing body of knowledge, told through short interviews with Penn Museum and outside experts. 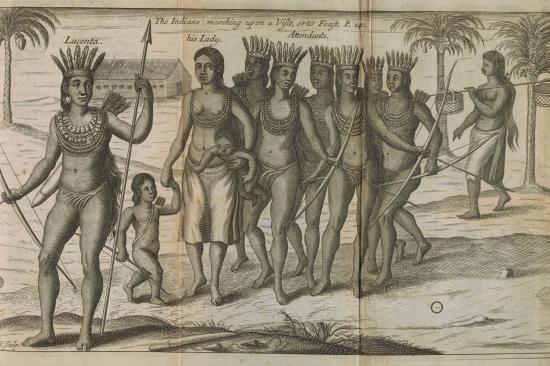 Long overshadowed by research on other indigenous Central and South American peoples, the Coclé remain mysterious, but archaeologists, physical anthropologists, art historians, and other specialists are drawing on the materials they have excavated to tell more. The rich iconography, sophisticated gold working technologies and craftsmanship, exacting placement of bodies and materials in the burials: all offer clues about the world view, artistic style, and social hierarchy of the Coclé. 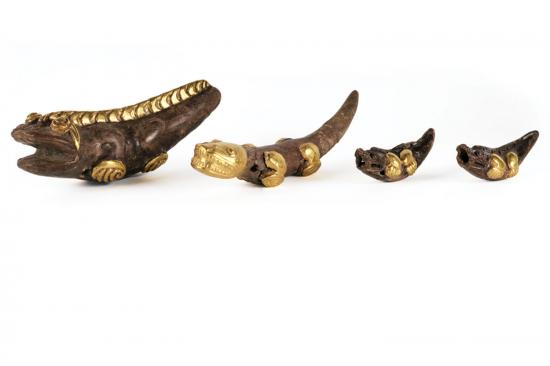 Conte cemetery were rich in cultural meaning and utilitarian value, and Beneath the Surface uses them to begin to create a portrait of the Coclé people. Central to Exhibition Curator Clark Erickson's vision of "peopling the past" is a contemporary rendering of the central burial's Paramount Chief; he stands replete with some of the golden pendants, arm cuffs, and plaques, exquisitely crafted and worthy of a great warrior, which he wore to his grave.

Though not identified as direct descendants of the Coclé, many indigenous groups continue to live in Panama and in the region of Sitio Conte today. A small section of the exhibition provides visitors with an opportunity to see contemporary Kuna clothing that echoes some of the design forms and styles of ancient Coclé pottery, pendants, and gold. 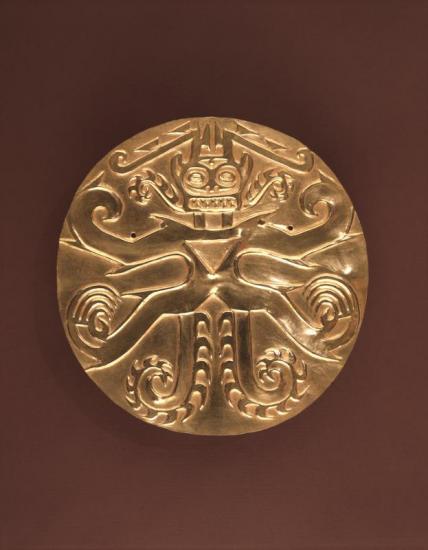 Throughout, visitors can explore the evidence and encounter new perspectives on who these people were and how they lived.