Northern Arizona University students are credited with preserving archaeological sites in Belize and supporting that country’s economy, where one in four jobs is related to tourism.

Fifteen undergraduates and four graduate students spent the summer months in Belize doing excavations, which included a structure at Xunantuknich, an ancient Maya site near the Guatemala border.

“This work not only conserves cultural heritage, but it also creates jobs, contributes to national identity and is educational,” said Jaime Awe, an assistant professor of archaeology.

In addition to the archaeological tenets of excavation, students learned about preservation. Maya built with lime plaster, a combination of water and lime, which deteriorates when exposed to rain and algae.

“When we discover fragile monuments, we make a fiberglass replica that covers the original, thereby preserving and protecting it,” Awe said. “When you go to the sites, you cannot tell that you are looking at a replica.”

Another important aspect of the students’ applied archaeological experience was interacting and training Belizeans, who lead tour groups at the ancient Maya sites and share information with visitors about their ancestors’ lifestyles and activities.

“Many people working in archaeology tend to focus on one specific area,” said graduate student Hannah Zanotto, whose previous experience was in the southwestern United States. “Going to Belize and working on excavation, dissemination of information and conservation gave me a broad perspective of what it means to do archaeology and the research being done in different areas.” 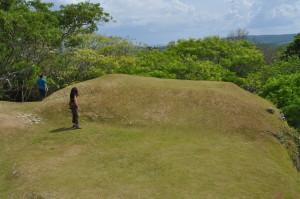 The Xunantunich site before excavation

Fellow graduate student Dagmar Galvan worked alongside Zanotto and also did research in Belizean caves, which is the focus of her thesis. “I’m studying reverse handprints, a rare type of rock art, created by blowing pigment or paint over a hand placed on the cave wall,” Galvan said.

The Maya treated caves as sacred spaces and left offerings, especially during the drought period between A.D. 700 and 900, which eventually led to the collapse of the Maya civilization and abandonment of many of their cities. 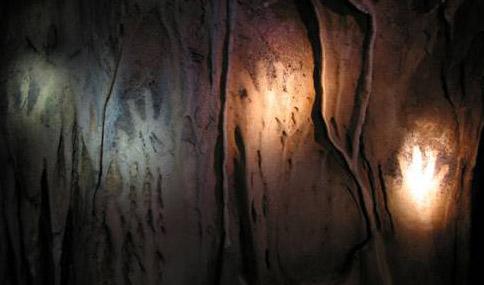 Reverse handprints inside a Belizean cave. Photo by Dagmar Galvan

Awe, who spent 14 years living in Belize and worked as director of that country’s Institute of Archaeology, plans to offer the field study experience each summer. Students of all areas of study can contact Jaime Awe at Jaime.Awe@nau.edu to find out about the international program opportunities.