With a name like Beit She’arim, Hebrew for “House of Gates,” it seems obvious that the UNESCO world heritage site would have ancient portals. Still, archaeologists from the University of Haifa were surprised to stumble across a massive gateway during recent excavations at the site in northern Israel.

Half of an impressive northeast-facing gate built of limestone blocks, with postholes for doors and locks, abutting a circular tower, along a road leading into the ancient town, turned up during a dig in the fall of 2016, the school announced Wednesday.

Despite its outsize cultural significance as the headquarters of the Sanhedrin, the chief Jewish judicial and scholarly council, and the birthplace of the Mishna, Beit She’arim was a relatively small town — not a likely place for fortified city walls.

“As far as we were aware, a settlement of this type wasn’t supposed to be ringed by a wall, and therefore it was almost obvious that the name Beit She’arim wasn’t connected to the word ‘gate,'” archaeologist Adi Erlich, who headed the dig, said.

In the decades since the first excavations at the site in 1936, most scholars assumed Beit She’arim’s name was derived from some other origin, since no city gates were found.

“In the beginning, it appeared in [first century Jewish historian] Josephus Flavius in Greek as Besara, so [scholars] thought that maybe it was Beit Sharay, which is another name for a court, the Sanhedrin,” Erlich said. Others suggested the gates referred to the entrances to massive rock-hewn tombs leading into the hillside. 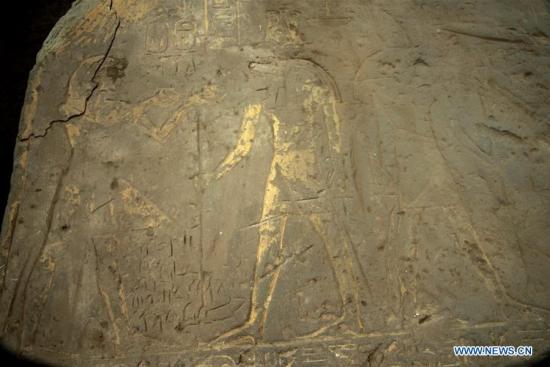 The town was a major center of Jewish life and culture in the Land of Israel during the Roman and Byzantine periods. It was there that Rabbi Judah the Prince compiled the Mishna, the basic text of Jewish oral law, in the mid-second century CE. Its necropolis of Jewish tombs was recognized by the United Nations’ culture and education body in 2015 as “a treasury of artworks and inscriptions in Greek, Aramaic, Hebrew and Palmyrene.”

An emblem of a menorah carved in the stone, inside a structure at Beit She’arim National Park, an archaeological site in the Lower Galilee. (Doron Horowitz/Flash90)

The discovery means archaeologists have to revisit the issue of Beit She’arim’s name, along with its scope during its heyday.

“It’s not conventional,” Erlich told The Times of Israel, “but Beit She’arim isn’t a conventional place.”

The gate turned up in the even tinier town of Beit Zaid, a moshav founded by Jewish pioneer Alexander Zaid, who discovered Beit She’arim right next door. Tali Zaid, his granddaughter and one of the 74 people who live in the community, happened upon some ancient-looking stones in her yard a few years ago during renovations on her home.

Erlich got approval from the Israel Antiquities Authority to dig up the yard this past fall, and uncovered the gate during excavations from September to November.

Though the gate hasn’t yet been dated, the University of Haifa team was certain it was associated with the Roman period.

Erlich was astonished by the discovery.

“Most of the settlements in the Roman period aren’t fortified, and certainly not a relatively small Jewish town that wasn’t even considered an official Roman town. There were isolated fortified Jewish towns in the north, like Yodfat, but even those towns that were large and central didn’t include a large and impressive gate like this,” she said.

Erlich pointed to the town’s affluence as a possible reason for the tight security. Beit She’arim was home to wealthy and prominent Jews, and the gated community may have gotten its name from the fortifications keeping them safe.

“Another possibility is that it’s an important fortress positioned at a Roman-era site, and we exposed its gatehouse,” she said.

Alongside the gate, Erlich’s team found a later, fourth century CE potter’s furnace, and evidence that at some point it was converted to produce glass. Glass kilns from that period were found last year not far from Beit She’arim, at Khirbet ‘Asafna, lending evidence to ancient Judea’s role as an industry powerhouse.

Only half of the gateway has been excavated, and Erlich said she and her team plan to return to Beit Zaid next season to excavate the second half of the gate, and hunt for other gates at Beit She’arim.