The remnants of Ming Dynasty aproll drainage system (sloping brickwork to disperse water) and brick-covered wall with layered pressed-earth and stone were discovered outside Nansansuo.

The remnants of Ming Dynasty aproll drainage system (sloping brickwork to disperse water) and brick-covered wall with layered pressed-earth and stone were discovered outside Nansansuo.

Early and existing structural ruins and floors were exposed at the Nansansuo building complex. These ruins make clear that when building construction in the former imperial palace first began, everything from the building foundations to the underground drainage system was done according to a well-planned integrated layout. The relationship between the archaeological strata shows that rebuilding occurred during the reign of the sixth Qing emperor, Qianlong (1711-1799). The three-way layout of the Nansansuo building complex was part of a plan to demolish earlier structures to establish a smooth, flat surface on which new foundations could be started afterward. These findings provide new information about the Ming and Qing dynasty approaches to renovation planning methods, palace reconstruction, and engineering practices, as well as revealing more of the history behind the Forbidden City court.

A pit full of chinaware fragments was discovered outside the storehouse, which broken the original floor of storehouse. A large number of imperial kiln chinaware fragments from the reign of the first Ming emperor, Zhu Yuanzhang, to the reign of the penultimate Qing emperor, Guangxu, were excavated inside the pit.This chinaware, which was clearly once used by the imperial household, was purposely smashed into pieces, and afterward, all the pieces were buried in this central location, according to an established custom or rule regarding the treatment of imperial household chinaware. Unlike chinaware made at non-imperial kilns for everyday use by ordinary citizens, imperial household chinaware could not be handled casually or arbitrarily, a custom fully demonstrating the prestige and power associated with it. This phenomenon is identical to one found in Jingdezhen, a famous town for chinaware in Jiangxi, where smashed and buried pieces of imperial chinaware production rejects were discovered at imperial kiln ruins. The latter instance was a measure by the emperor to enjoy a monopoly (on imperial chinaware) as well as to safeguard imperial household prestige.They are counterparts to one another, both clear examples of the lifespan of imperial chinaware, showing official supervision at every step—from production, quality control, transportation and introduction into usage in the imperial household, to destruction and disposal. From beginning to end, imperial chinaware remained under strict control, which compensated for a lack of accompanying written documentation.

Meanwhile, the ground below the storehouse floor is filled with multiple ash-pits or ashy grey soil of late period, possibly areas of previous disturbance. Many artifacts were unearthed from these areas of disturbed soil, including broken and fragmented jade artifacts, crystal artifacts, broken bone and clamshell tools (including items made from giant clam, Tridacnaderasa), and fragments of kapala (human-skull bowl). The inner walls of the kapala contained Sanskirt and Tibetan mantras written in cinnabar.There is a lack of written documentation regarding the proper handling of kabala after they’ve been damaged. These new discoveries provide firsthand information for research on Qing Dynasty internal government affairs surrounding circumstances of handicraft production of imperial jade stoneware and other tools. It appears from the excavation that all these destroyed and fragmented tools and items were originally added to pits in different batches over time. The approach was to dig a pit inside the storeroom to bury these items as needed. Past sporadic discoveries provide supporting evidence that this way of creating this kind of landfill inside the Forbidden City was at that time one of the main methods of processing all kinds of garbage to avoid runoff or drainage problems in the palace.

Excavations in Cining Huayuan revealed a broken relationship among architectural ruins—from the original palace foundation to masonry from the Ming Dynasty, including Jiajing reign Year 16 engraved bricks in the gutters and floor, to the overlapping Qing and modern surfaces. A few green-glazed red clay tiles along with one small piece of a celadon bowl lip were excavated from inside the rammed earth floor. The green glaze is a distinctive characteristic of pottery from the Yuan Dynasty (1279-1368). Chinaware kiln site excavations show that bowls with this kind of style and glaze are a product of the late Yuan and early Ming dynasties. These samples provide evidence that this rammed earth building foundation could not have been constructed any earlier than during the early Ming Dynasty. 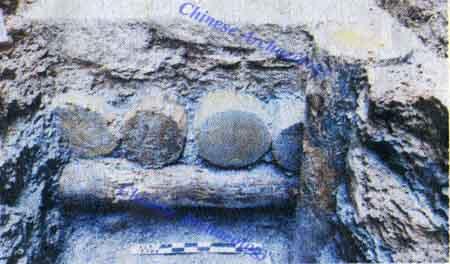 During the 2014 rescue excavations, it is the first time:

• excavations in multiple areas of the Forbidden City revealed a clear delineation between different eras, as well as the planned layout of early period buildings; and

It is also the first time that the ruins and artifacts of the Forbidden City have been taken into consideration as a whole, a complete macrocosm, providing scientific evidence and firsthand information of the evolution of the site over time.  Archaeological finds in several different areas of the Forbidden City have allowed the accurate surveying and mapping of early period building foundations, while beginning to develop a multidisciplinary approach to scanning and testing for a better understanding of the variation and changes in Forbidden City buildings.      (Translator: Grace Warren)