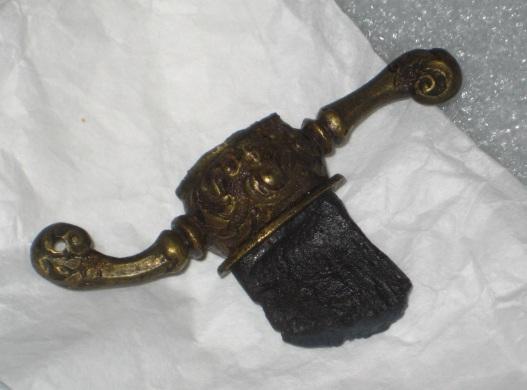 Thousands of priceless artifacts have been recovered from the early 1700′s shipwreck in Beaufort Inlet that is widely considered to be the “Queen Anne’s Revenge,” the ship abandoned by Blackbeard the pirate after he ran aground in 1708.

The most famous pirate in history, Blackbeard was the scourge of the East Coast and the Caribbean, as he attacked merchant ships, took people hostage, flaunted the law with a band of dangerous men, and died in a blaze of glory not far from Ocracoke Island, North Carolina.

This past week, divers from North Carolina’s underwater archaeology division raised two thousand pound cannons from the murky depths of the inlet where the wreck is located and will restore them over several years at East Carolina’s lab in Greenville.

However, one find that was recently shown to the media in the past couple of weeks captures the imagination like few of the other pieces, as it represents one of the more iconic pieces of hardware associated with pirates: a sword.

A magnificent remnant of a brass sword hilt (the part where the swordsman would grip the sword) was recently shown to the media at the Beaufort Martitime Museum, which is run by the State of North Carolina.

The amazingly well preserved brass piece survived its almost 300 year stay on the bottom of the water with little corrosion. The hilt has a curled section on each end but in the middle is an amazing piece of art that survived the centuries.

A woman’s face and torso can be seen in the middle of the sword hilt. The beautiful lines seen in the sword are still clearly visible despite the passage of time and exposure to water.

Archaeology curator Lynn Anderson says the woman seen in the sword could possibly be Queen Anne herself, the namesake of Blackbeard’s ship. Edward Thatch, or Blackbeard, is reputed to have been a privateer in Queen Anne’s War against the Spanish. When the war ended, the privateer continued his attacks on ships outside of the law, especially when he not only continued as a marauder on ships flying the Spanish flag, but the English flag as well.

Anderson carefully held the sword piece in a piece of fabric held by her gloved hands, as she said that human touch could affect the solid brass metal piece. These type of items are uniquely treasured by the archaeologists.

Although it is believed that most of the Queen Anne’s 40 cannons were left behind when the ship ran aground, such a piece that represents the pirate ship’s arsenal of small arms is rare, as the pirate’s likely took such easy to carry and personal armaments with them when they abandoned ship.

But did the sword belong to Blackbeard personally? It’s certainly hard to say for sure.  With the fine craftsmanship seen and the use of brass in addition to regular base metals for the blade that long rusted away, it may have been a treasured weapon used by one of Blackbeard’s crew.

The face on the handle that may be Queen Anne certainly leads one to believe that it may have been created specially for or claimed by someone who fought in her namesake war or was closely associated with her namesake ship.

In an interview with Queen Anne Revenge historian Dr. Lindley Butler on Thursday in Beaufort this newspaper had a chance to talk to him about the sword.  Dr. Butler was there for the trip to Beaufort Inlet to recover two more of Blackbeard’s cannons from the bottom of the water. [see separate article.]

Why would they leave something like a sword behind?  Butler says that when they ran aground and left the ship, the pirates would have grabbed important items like food, gold dust or coins and of course guns, but in their rush to leave, they failed to grab many items.

“As it began to list to port, they’d be breaking out rations,” he said.  ”There are many personal items that are left.”

Interestingly, Dr. Butler said there are drawings from the period showing Blackbeard carrying a sword with the curls on both ends that is very similar to the one found by the Queen Anne’s Revenge divers. [See drawing at bottom].

According to Queen Anne’s Revenge curator  Lynn Anderson, the sword design was popular back then, so the renditions of Blackbeard could have shown one of thousands of such swords that sport a similar hilt.

Still, the case could be made that the sword could have been used by Blackbeard himself since it was found in the Queen Anne’s Revenge shipwreck. It at least was used by one of his crew and possibly left behind in the rush to get off the foundering boat.

“It could have been, I’m not going to say that for sure,” said Dr. Butler.

The world will likely never know for certain, but it’s at least interesting to imagine that a swashbuckling pirate, perhaps Blackbeard himself, wielded the flashy weapon in battle some 300 years ago. It was a time that was perhaps more barbaric, yet perhaps more romantic that continues to yield great tales that tickle the imagination centuries later.

As curator Lynn Anderson held the piece carefully, it’s amazing to think that the legend of Blackbeard lives on in such beautiful pieces of history that somehow survived hundreds of years at the bottom of the water and can be viewed and up close in person.

The sword hilt and other artifacts will be or are already on display at the NC Maritime Museum in Beaufort, North Carolina. The museum is free of charge and has an ongoing display that includes many items from Blackbeard’s ship and educational displays on other aspects of the state’s nautical history.

Drawing from the period, showing Blackbeard with a similar sword hilt.