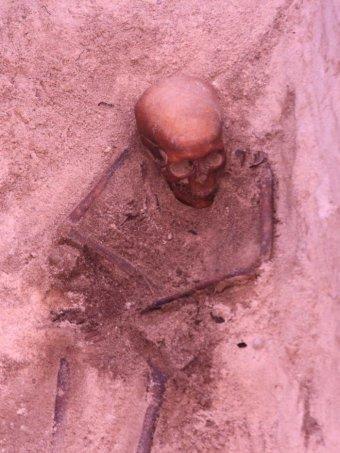 A skeleton found on Beacon Island is believed to be from the Batavia shipwreck massacre. ABC News: Sarah Taillier

Secrets from one of the nation's most horrific maritime mass murders have been unearthed on a tiny island off Western Australia's coast.

A new grave has been discovered almost four centuries after the Batavia was wrecked on Morning Reef, within the Abrolhos Islands.

The Dutch East India vessel was on its maiden voyage when it wrecked with more than 300 people on board.

The survivors managed to swim to the nearby Beacon Island, but about 40 people drowned.

What then played out on the tiny coral outcrop was a 17th-century tale of mutiny and systematic murders of those aboard that inspired movies, books and plays and remained one of the darkest chapters of Australia's maritime history.

Some of the evidence of the bloodthirsty episode has only now been uncovered, with experts revealing on Tuesday they have found another skeleton, the 11th found on Beacon Island since the 60s.

Two musket balls were found near the body, which was about 1.5 metres underground.

A forensic team was examining the remains and said they were believed to be that of an adolescent.

The WA Museum's head of maritime archaeology, Jeremy Green, said the find was a major step forward in better understanding what was an internationally significant chapter in history.

"This was the first time that Europeans lived in Australia — albeit it wasn't in the mainland but it was here — so it's the oldest known European habitation in Australia," he said.

"So it's got to be important."

A human tooth found on the final day of an expedition at the island in 2013 led archaeologists to examine the same area where they eventually discovered the skeleton.

Mr Green said mutton birds on the island dug down into the ground and brought little items to the surface, which indicated areas of archaeological interest.

Surprisingly, he said it appeared the skeleton was not the owner of the tooth.

"What's very interesting is that it looks like that tooth doesn't belong to that grave, which means that there's another grave very close," he said.

A mass grave was discovered on Beacon Island in 1999, but archaeologists had to wait 15 years before old fishermen shacks were removed so they could comb the entire island for clues left behind in 1629.

The team of researchers was studying the island as part of the Australian Research Council-funded project, led by UWA archaeologist Professor Alistair Paterson.

Professor Paterson said experts travelled from as far away as Holland to help piece together the Batavia story.

"Obviously it's a really significant site, not just for Western Australia and the Dutch, but also for Australia ... so we're pretty excited to see this next phase occurring here," he said.

"Many individuals died, it was a horrendous event, and yet we know many of those people died in the water. Presumably they were disposed of in surface conditions, so we wouldn't expect at all for many of [their remains] to survive ... but we're finding them, so some of them do."

The Batavia was carrying gold and silver when it sailed from Texel for the Dutch East Indies on October 27, 1628, to obtain spices.

But the vessel went off course and was wrecked in the Abrolhos on June 4, 1629.

A total of 180 people – among them 30 women and children – were ferried off the ship, while about 70 men remained.

According to the WA Museum, the survivors landed on Beacon Island.

Sifting for bones and artefacts from the Batavia massacre at Beacon Island off Western Australia. ABC News: Sarah Taillier

Some, including the ship's captain, navigated a longboat to Java to find help after it became clear they could not survive long on what was left of the ship's provisions.

Undermerchant Jeronimus Cornelisz assumed charge of the group, and began picking off survivors, by sending them in search of water on nearby islands, where he thought they would not survive.

His men drowned many others.

He also murdered women and children, the ill and infirm. He kept a number of women alive to subject to repeated rapes.

He was eventually overcome by a force he had sent to one of the islands, as he tried to lure them into a trap.

When the captain returned to the site of the shipwreck, he sentenced the mutineers to having their right hands chopped off, then put them to death on the gallows.

Some of the lesser offenders were returned to Holland, while another two men were left stranded on the mainland as punishment.

"I still think that we've got some way to go to realise the importance of this and other Dutch sites in Western Australia," he said.

"West Australians know the story really well, particularly in Geraldton and other places, but I think there's a lot more of that story to be picked up elsewhere in the country."