Initial 17th-century hetman’s residence in the citadel, reconstructed on the basis of archaeological research in 2008

The Canada-Ukraine archaeological expedition has continued conducting annual field research in the town of Baturyn, Chernihiv Oblast, irrespective of the military actions in eastern Ukraine. In 2014, some 50 students and scholars from the universities of Chernihiv, Kyiv and Hlukhiv took part in the excavations there. Last summer, the expedition involved 45 members from these institutions.

The leaders of the expedition are archaeologists Yurii Sytyi and Dr. Viacheslav Skorokhod of Chernihiv National University. Dr. Volodymyr Mezentsev of the Canadian Institute of Ukrainian Studies (CIUS) at the University of Alberta is the executive director of the Baturyn archaeological project from the Canadian side. Prof. Zenon Kohut, distinguished historian of the Hetmanate and previous director of CIUS, is the academic adviser. A leading historian on the Chernihiv Principality, Prof. Martin Dimnik of the Pontifical Institute of Mediaeval Studies (PIMS) at the University of Toronto, also participates in the research of Baturyn and the publication of its findings.

In 1669, this town became the capital of the Kozak state. The glorious reign of Hetman Ivan Mazepa (1687-1709) was a golden age for Baturyn, when it competed with Kyiv and Chernihiv for supremacy and became known in the West. During  Mazepa’s insurrection for the freedom of Kozak Ukraine from Moscow’s growing domination, Baturyn residents were the first to offer armed resistance to the Russian troops. The Russians brutally suppressed this uprising. In 1708, the tsar’s army, aided by a traitor, occupied, plundered, and burned down the hetman capital, killing 5,000 to 6,500 garrison fighters and 6,000 to 7,500 civilian inhabitants, regardless of gender or age.

The enlightened Hetman Kyrylo Rozumovsky (1750-1764) rebuilt Baturyn from the ruins, restored its status as the capital of the Kozak realm, and developed it into a major manufacturing center in the Chernihiv region. After his death in 1803, the town gradually declined throughout the 19th and 20th centuries and revived in independent Ukraine. Following the reconstruction of the impressive fortress citadel, the hetman’s palaces, the state treasury house, the court hall and churches, as well as the establishment of several modern museums of antiquities, since 2009 Baturyn has become one of the most popular tourist attractions in Ukraine. Despite the tense situation in the country, about 143,000 tourists visited its museums and historical sites last year – an increase of 13,000 from 2014.

In 1751-1753, Rozumovsky commissioned his first palace in Baturyn, which was demolished in 1821. It was probably designed by the renowned Italian architect Antonio Rinaldi, whom the hetman invited to Ukraine in 1751. Descriptions from the 18th and 19th centuries tell us that this palace was a spacious one-story late Baroque wooden building with private living quarters, two side wings for guests, an inside chapel and a rich library.

In 2014, Mr. Sytyi discovered the trenches from the dismantled brick foundations of this palace near the town’s secondary school. On the basis of architectural drawings of analogous timber palaces in the Chernihiv and Sumy regions of the 1740s, as well as descriptions of the first Rozumovsky residence in Baturyn, this writer and computer artist Serhii Dmytriienko of Chernihiv have completed a hypothetical graphic reconstruction of its front elevation.

The archeological expedition has continued excavating the remnants of Mazepa’s manor in Honcharivka, a suburb of Baturyn. In the late 1690s, he constructed there a masonry palace (20 by 14.5 meters) with three stories, a basement, and a mansard primarily in a Western Baroque style. This main residence of the hetman was pillaged and burned by Muscovite troops during the town’s ravaging in 1708.

Archaeological and architectural research of the palace debris, along with analysis of a 1744 drawing of its ruins preserved at the National Museum in Stockholm, have allowed investigators to determine the ground plan, size, design and decoration of the edifice. This author and Mr. Dmytriienko have prepared hypothetical computer reconstructions of the exterior of Mazepa’s palace. I posit that it had no counterparts among contemporaneous secular buildings of central Ukraine but was similar to the tower-like royal and aristocratic palatial halls of early modern Poland. Some analogous examples of the latter include the three-story masonry residential tower of King Sigismund I the Old in the town of Piotrkόw, Łódź Voivodeship (1519), the lost mansions of the magnates Kazanowski and Kotowski (late 16th century), as well as the restored castle of the Ostrozky (Ostrogski) princes from the 1680s in Warsaw. 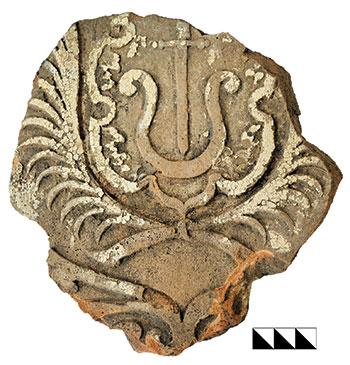 Fragment of ceramic stove tile with a comparable heraldic relief discovered in the northern suburb in 2014, from the Baturyn Museum of Archaeology - Tetiana Kerbut

As a youth, Mazepa served at the court of King John II Casimir Vasa in Warsaw, and he could well have modeled his Baturyn residence on palaces in the Polish-Lithuanian Commonwealth. At the same time, it is possible that the hetman borrowed the pattern from some fashionable Baroque structure in Western Europe. It was from there that the tower halls of the 14th-16th centuries as well as Renaissance and Baroque architecture and ornamentation spread to Poland. In 1656-1659, Mazepa traveled and studied at universities in Germany, France, Holland and Italy, and had the opportunity to familiarise himself with true masterpieces of Baroque architecture there.

Archaeologists have unearthed hundreds of fragments of fine ceramic glazed multicolored and terracotta floor and stove tiles, or “kakhli,” as well as plate-like rosettes and plaques bearing Mazepa’s coat of arms that revetted the fasades of his villa in Honcharivka. These details are recognized as valuable examples of Ukrainian Baroque decorative and heraldic arts. Mr. Sytyi has established that they were fashioned by accomplished Kyivan craftsmen whom the hetman brought to Baturyn. Thus, the imposing adornment of his principal residence represented a blending of Western and Ukrainian baroque styles.