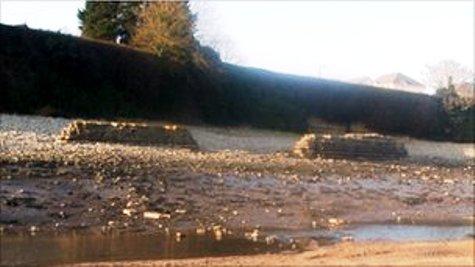 An archaeologist believes he has discovered the remains of a Roman quarry in the old harbour at Barry in the Vale of Glamorgan.

The quarry was operational until the 19th Century but its origins were unknown.

"It's not in the records - it may have been been completely ignored because it's too obvious," said Mr Langford.

He believes the quarry to be the source of limestone used for the Roman fort whose remains can be seen in the walls around Cardiff Castle, although historical records do not mention such a quarry.

"I've had this belief that there was a Roman quarry there all my life," said Mr Langford, a landscape archaeologist from Barry.

He said a wall of unquarried high-quality lias limestone left in place on the beach was evidence of a quarry, similar to larger examples along the coast at Porthkerry, Rhoose and Aberthaw.

People would have been able to extract the material behind the wall at any time, without being engulfed by the sea.

A discovery during a recent expedition with students convinced Mr Langford of the quarry's Roman origins.

"I was looking down at the floor and there was a piece of pottery the same colour as the shale," he said.

The artefact is believed to be a large piece of Roman "greyware" rim, manufactured in about 200 AD.

Mr Langford said other discoveries of Roman pottery and tile in the area suggested the quarry was being worked almost 2,000 years ago. 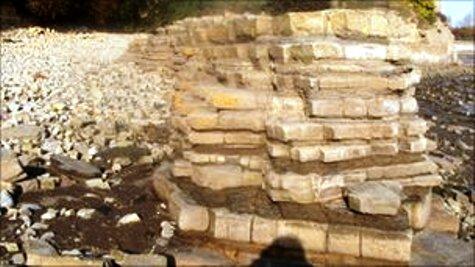 "I'm looking at the quarry as something that was in full production before the harbour area really became a port," he said.

"On the lowest levels you can see where some of the stone has been deliberately cut, probably some time before the 1800s.

"To have a quarry such as this is very important to archaeology, - it goes to show the value of the local limestone not only in building, but for lime in agriculture for nearly 1,900 years."

Mr Langford, who runs student expeditions around south Wales under the Time Signs banner, hopes to investigate the location of the quarry in more detail to confirm dating sequences.