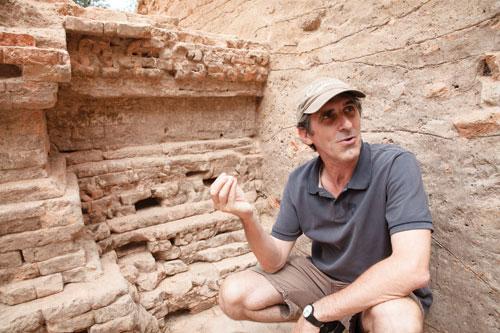 Christophe Pottier digs in: initial trenches were expanded once the scale of the temple became apparent. Photograph: Alistair Walsh

Archaeologists have unearthed one of the most significant pre-Angkorian temples to have been discovered in the past decades. What looks to be a seventh century temple has been found buried in the walls of the West Baray, a find which will shed light on the Pre-Angkorian period.

Since 2000, Christophe Pottier, a French archaeologist, has been working to find out more about the beginnings of the Angkorian empire.

“The beginning of Angkor is so poorly known for various reasons, partly because many early settlements were actually destroyed by later settlements during the Angkor period.  My main concern on this archaeological mission was to study the earliest Angkorian capital cities,” Pottier told The Insider.

The Baray area was a significant early capital, but many of the remains there were destroyed during the construction of the Baray in around the eleventh century.

Pottier and his team excavated sites in the Baray area for four or five years before moving to another ancient capital site near Bakong. From this second site, the team learned what to look for and how to better understand the urban layout of pre-Angkorian sites. 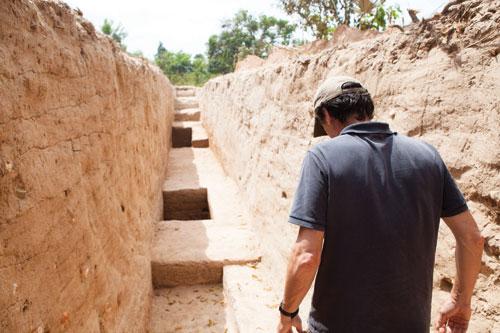 “We decided last year, with all the conclusions we got from this area near Bakong and the lay-out there, that we are now in a better position to understand the urban settlement,” Pottier said.

“This year we wanted to know a bit more about the expansion and the characteristics of this period, especially in chronological terms. We don’t really know much about the settlements in this region between the seventh century and the construction of the Baray.”

To that end Pottier started looking for sites where he might find a pre-Angkorian temple near the Baray that showed continuous occupation over the next few centuries but hadn’t been touched since the eleventh century. He knew he had to look in the walls of the Baray to find such a temple.

After Pottier found a few scattered bricks and a broken lintel in the forest, he had a strong hunch that this might be his site.

His hunch was right, but what was revealed was a temple far bigger than he expected. The size of the temple is hard to gauge but excavation revealed vast pedestals and structures which indicate the temple was one of the more important of its time.

The temple is impressive, but what Pottier is most excited about is evidence of continued occupation of site up until the eleventh century when it was deliberately demolished and buried into the walls of the Baray.

“It was probably a very rich sanctuary. Given the massive size of the pedestal, it may have been quite a significant temple. And then they just started to bury it under the dyke. We are still analysing things, but it seems clear that at that period of time they decided to get rid of the temple, just flatten the whole thing,” Pottier said.

The find gives an extraordinary insight into the movements of Angkorian people as they shifted capitals and it reveals in part how the Baray was built.

“We were looking for a pre-Angkorian settlement, for a sequence of modifications and additions until the temple was buried, and we got it. Now we have to process the data, we have to get the hydrocarbon dates, we have to analyse the ceramics which we found. Then we’ll have the answers to the questions we were asking,” Pottier said.

“Questions such as if for instance it was still in use all along from the seventh century to its final days when it was buried by the Baray. And apparently the answer is yes. And that’s a new thing. No one really imagined that the pre-Angkorian temples as early as seventh century were still in use in the tenth or eleventh century.

“It’s very hard to know if the settlements remained occupied continuously in Angkor, or if was a movement of capitals with successive abandonment of earlier settlements.

“So far the main result is to first confirm the presence of a pre-Angkorian sanctuary, confirm that it was also quite a big one and still active to the eleventh century. Now we have enough evidence to analyse exactly the construction of the Baray and how the Baray may have been made in successive sequences.”

Layers in the soil burying the temple seem to confirm that the Baray was built in different stages. The original capacity of the Baray is thought to have been later expanded through raising the height of the Baray walls – a theory confirmed by Pottier’s findings here.

Pottier concedes that his find may not seem that important to the outside observer, because it is after all just another temple in a region with thousands. But the information gleaned from the find is another important piece of the puzzle in pre-Angkorian history.