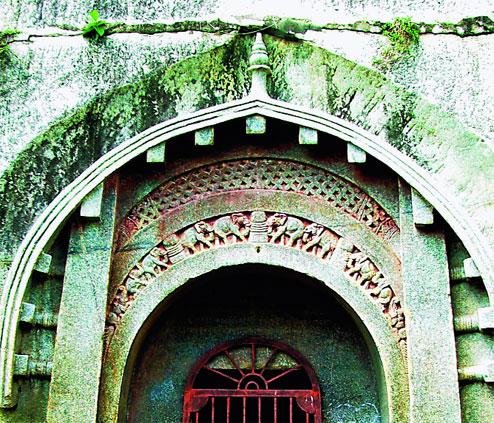 A Barabar cave and (below) inscriptions inside a Nagarjuna cave at Jehanabad in Gaya. Pictures by Suman

Archaeologists have recently claimed that ascetics known as Ajivikas used Barabar and Nagarjuna caves in Jehanabad district to practise ritualistic deaths at the time of Emperor Asoka and thereafter.

The Ajivikas’ practice of fast-unto-death resembles that of the Jains.

A group of historians from Bengal headed by Sushmita Basu Majumdar, departmental head of ancient history and culture, University of Calcutta, and a few research scholars from the same department conducted the studies. Kashi Prasad Jayaswal Research Institute, Patna, had entrusted the team with the assignment of documenting the archaeological features of Barabar and Nagarjuni hills.

“Earlier, researches on the twin hills had suggested that Asoka donated the caves to Ajivikas as a monsoon shelter but the team found new evidence by re-interpreting the inscriptions engraved on the walls of the caves,” said Bijoy Kumar Chaudhary, director, Kashi Prasad Jayaswal Research Institute.

The Barabar caves are earliest groups of man-made caves in the country. According to the team’s findings, Emperor Asoka realised the importance of this place as early as the BC 3rd century and left his indelible mark in these caves by inscribing the walls in Asokan Brahmi and declaring his decision of donating these areas to one of the earliest religious groups, the Ajivikas.

“The term nishidhi as mentioned in the inscriptions have been overlooked by earlier scholars but as per our re-interpretation, it is a way to attain salvation. The concept of fast-unto-death is a common phenomenon among Jains who specifically call it sallekhana. The same concept was used by the Ajivikas, who were fatalistic by faith and practised the same in these caves,” said Majumdar.

Highlighting the Ajivikas’ death rituals at the twin caves, Majumdar said: “Death was a celebration and was a way in itself to attain salvation and make oneself free from the circle of life. Since there was complete seclusion, these caves provided the space for the ultimate rituals and preparations for the final journey. The reading of the text simply changed the entire meaning of the inscription and for the first time provides such vital information about the Ajivikas.” 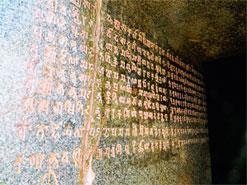 Apart from Barabar caves, the team also re-read the Maukhari inscriptions of Nagarjuni caves. The caves’ walls bear the inscriptions of the grandson of Asoka, Dasaratha, who also proclaimed to donate the three caves in this area to the Ajivikas.

“It has been mentioned here that people of Maukhary dynasty (around 5-6th century AD) were installing a new deity, Kattayani, brought from the Vindhyan region in Nagarjuni caves, which was aptly justified by the mention of river Mahanadi. The earlier scholars also overlooked this part of the inscription and there was no attempt to correlate this particular data with the rest of the landscape. The script has enough similarities with the script from Maharashtra and the Vindhyan region, probably indicating the migration of the acharya (head priest) of the Saivasiddhanta group from that particular area,” said Majumdar.

Chaudhary said Kashi Prasad Jayaswal Research Institute would publish the team’s findings in the form of a monogram.