Banaras (Inde): new archaeological excavations are going on to determine the age of Varanasi

A view of Raj Ghat in Banaras

"Benaras is older than history, older than tradition, older even than legend and looks twice as old as all of them put together" -- Mark Twain.

Four days before it goes to the polls, Varanasi is at its chaotic best. The city has been overrun by outsiders: political activists, analysts, scholars, journalists, merchants. This is, after all, the most high-profile contest of the month-long tamasha where Arvind Kejriwal had locked horns with Narendra Modi. It seems all residents too have come out of their homes, unmindful of the summer sun, to debate the elections. The sea of humanity is all over: in the narrow lanes of the old city, street corners and tea stalls. Except at Rajghat where there is a sense of calm. It overlooks the double-decker Madan Mohan Malviya Bridge and falls on the road that goes to Mughal Sarai. There is calm because this site is under the protection of the Archaeological Survey of India(ASI). 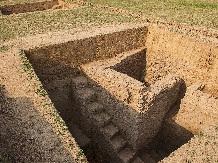 Nakhru, the gatekeeper, has been around for the last 14 years and has seen scores of tourists and archaeologists visit the site. With the Ganga as its backdrop, the landscaped site has seen many excavations, all done over the last few decades, which shed light on how old the city of Varanasi is. Along a row of red-bricked excavations which are spread over well manicured lawns, one can see freshly dug trenches at the site. Nakhru is excited because the diggers returned some months back. “Yahan phir khudaai ho raha hai,” he says, pointing towards freshly dug trenches. There is a neat row of artefacts lined at the end of the earlier excavations. “These are utensils which were used by people thousands of years ago,” he informs with quiet pride.

For over three months, a team of archaeologists led by Vidula Jayaswal, a former professor of archaeology at the Banaras Hindu University (BHU), has been excavating at Rajghat one more time. “The idea of our excavation is to find out how old is Varanasi and what are the factors which helped the city to survive till date,” says Jayaswal. Archaeologists believe that the first settlements in Varanasi happened in the 11th or 12th century BC. That makes the city (one of the seven holy cities for Hindus where they can attain moksha) one of the oldest continually inhabited cities of the world. Legend has it that Varanasi was founded by Shiva. In Mahabharat, the Pandava princes, after the battle of Kurukshetra, are said to have come here in search of Shiva. Buddha gave his first sermon at nearby Sarnath.

The current project, which hopes to find the real age of Varanasi, took off when Jayaswal met ASI Additional Director BR Mani. On February 3, Jayaswal and her team began the excavation work. They dug the earth till a depth of 6 metres to look for archaeological remains and a total of three trenches were dug. According to Ajay Srivastava, deputy superintending archaeologist of Archaeological Museum, Rajghat was chosen for the excavation because it represents the ancient city of Kashi. “Earlier excavations which had been carried out brought artefacts which dated back to the 8th century BC,” he says. Jayaswal says Varanasi could be older. A couple of years ago, she found in excavations in Ramnagar and Akatha, both around Varanasi, remains that suggested the settlements go back to 1800 BC. “Varanasi has a living history from 800 BC and that the city was inhabited around 9th century BC,” she says. These findings at Akatha and Ramnagar obligated a fresh set of excavations, according to Jayaswal. 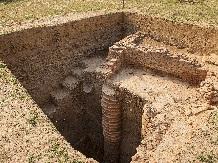 Jayaswal and her team have relied on two sets of techniques in their attempt to unearth the antiquity of Varanasi. One is the traditional method whereby upon excavating you come across ceramics or pottery which are dated to a certain pre-historic era. “There are regional patterns or ceramics which go back several centuries and are based on those findings,” says Jayaswal. The second technique is scientifically assessing the artefacts which are unearthed through carbon dating; if bones are found they are sent to labs for further studies. Both these methodologies have been used at the recent excavations. The excavations will go on for one more week and Jayaswal is hopeful that there will be more certainty about the age of Varanasi.

When the team started out excavation work, they came across yellow soil and were disappointed as it meant that the earth has been filled up again. This is where Nakhru came in and told them that this particular site had been refilled recently. “But we kept digging and after a few metres came across black soil and jokingly referred to those deposits as Nakhru deposits,” says Jayaswal with a broad smile. During the course of recent excavations, Jayaswal and her team have found ancient pottery and ceramics. It is the analysis of ceramics which helps archaeologists traces the pattern of how ancient a site can be. For instance, what they found at Rajghat were ceramics where there were certain impressions. Some artefacts had sutlis (chord) or hay tied to them. “All this little things help us in ascertaining the antiquity of the city,” says Jayaswal.

ASI has also started to dig at Sarnath, about 15 kilometres from Varanasi. The idea of excavation at Sarnath was that although there is literary evidence that Buddha delivered his first sermon here, there isn’t any archaeological evidence. “The oldest artefacts which we found are of the Maurya era and the latest belong to 12th century AD,” explains Mani. Buddha is believed to have visited Sarnath at least 300 years before archaeological evidence was collected. “Our aim is to trace those lost years,” says Mani. So far, they have found three idols and some kitchen utensils. So how old is Varanasi? “I think the antiquity of Varanasi can be pushed back to 1800 BC,” says Jayaswal. As Mark Twain had remarked, perhaps it is true.