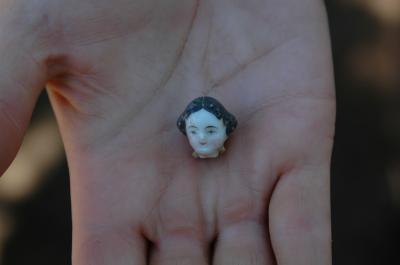 An archaeological team from the University of Maryland is unearthing a unique picture of the Baltimore-area's early Irish immigrants - of city children taught to read and write at home before widespread public education and child labor laws, as well as insular rural residents who resisted assimilation for one hundred years.

The excavation in the city represents the first formal archaeological research to focus on Baltimore's early Irish settlement and labor force.

"Behind the closed doors of their modest Baltimore homes, beyond the view of their bosses, these unskilled railroad workers maintained a rich social, religious and family life," says University of Maryland archaeologist Stephen Brighton, whose students just finished digging in the backyards of 19th century Baltimore immigrants.

Now, Brighton's team has begun work excavating another Baltimore-area site - a small settlement in Texas, Maryland that resisted adopting a more mainstream American lifestyle up to the Eisenhower years. This is the third year Brighton's team has worked there. 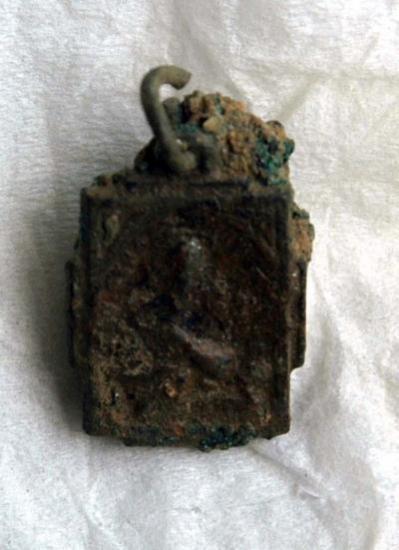 A medal of St. Joseph recalls the deep connections between the community and its church. Credit: Brighton/UMD

"These people helped build Maryland's infrastructure and supply materials for the Washington Monument, the U.S. Capitol, yet their voices have been muted in history," Brighton adds. "We're beginning to reconstruct their inner world."

Brighton and University of Maryland undergraduates participating in his archaeological field school spent the past three weeks digging behind the Irish Shrine in Baltimore - three homes along Lemmon Street in Baltimore dating to the 1850s. They stand across the street from the B&O Railroad Museum, once headquarters of the line. Most of the Lemmon Street immigrants performed semi- or unskilled labor for the B&O.

The archaeological team identified and excavated privies - pits that served as a receptacle for family trash and waste. Among the objects recovered: writing slates (the kind used by young children to practice the alphabet) and lead pencils, doll parts, toy tea cups, dinner plates, as well as a number of buttons.

"The children of these working class families were literate, or at the very least learning to read and write," Brighton concludes. "The children had at least some leisure or play time - even in an era when children from the working class were viewed as part of the family's economic structure and put out to work at an extremely young age."

The cache of children's materials on Lemmon Street tracks with earlier discoveries in the rural community of Texas, Maryland, and adds to his confidence that this is a representative find.

"We're looking back at a period in American history well before child labor laws," Brighton says. "To have a large collection of toys from two working class sites illustrates that many children, at least for a time, were allowed to be children. We may take it for granted today, but in that era there were few guarantees."

TEXAS, MARYLAND: 'UNLIKE ANYTHING I'VE SEEN IN THE BIG CITIES'

At one time, Texas, Maryland was a major hub for quarrying limestone and marble, and provided materials to build the first 150 feet of the Washington Monument, the portico of the U.S. Capitol, and the State House in Annapolis.

Brighton's team - excavating there for a third summer - is targeting privies from the backyards of some of the earliest homes in Texas. The buildings are gone, but the rear lots remain undisturbed, and may hold clues to the first 50 years of Irish life in the community. 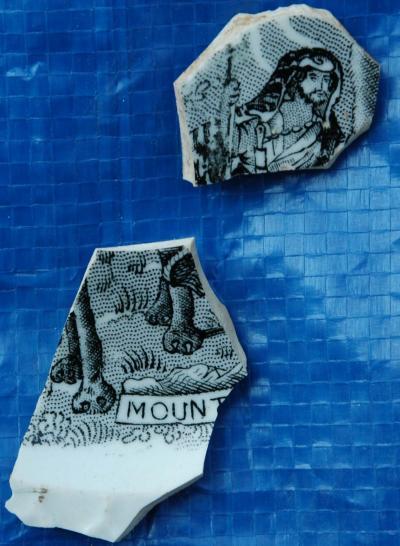 A Bible lesson is found on a child's plate in Texas, Md. last year. Credit: Brighton/UMD

From his previous digs, Brighton's already learned quite a bit about the distinctive patterns of life there.
Irish immigrants settled around 1846 and formed a tight community - one that he has found persisted into the 1950s, when quarries closed or consolidated, and work dried up. Those economic changes disrupted the fabric of family life there.

"The patterns in Texas are unlike anything I've seen in big cities like New York, Philadelphia and Baltimore," Brighton explains.

"For about a century, this community remained highly insular, and the families intermarried. They were able to maintain an invisible wall that separated them from the larger community and preserved their traditional ways. In the big cities, the Irish had blended in and adopted American lifestyles by the close of the 19th century," Brighton says.

Other evidence came from census records that showed several generations living under the same roof. Even after children married, they remained with their parents and eventually inherited the house.

FAMILY DINNERS: Ceramic plates were used at family dinners where everyone in the house gathered to share a simple meal, to bond, and transmit their cultural legacy. At the time, most Americans tended to socialize by holding large dinner parties, but Brighton didn't find the kind of serving dishes and utensils that would have been needed for such events. He concludes that the Irish immigrants didn't socialize that way and kept dining a family affair.

SOCIAL TEAS: Instead of dinner parties, the Irish brought the Old World tradition with them of socializing over tea. Over time, they maintained this pattern. Extensive tea service items testify to the practice.