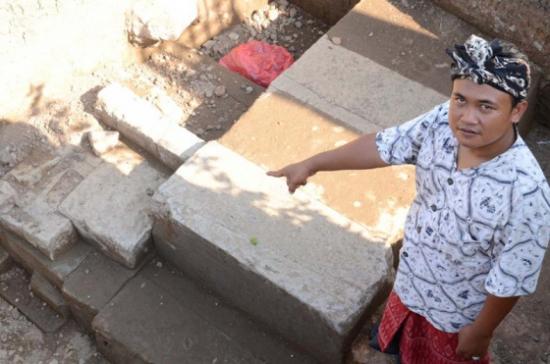 Old: Discoverer of 14th century temple ruins Chandra Kirawan points out the massive stones that are believed to be the foundations of Bali’s largest temple complex.

Ancient Balinese history was not uppermost in Ida Rsi Bhujannga’s life until plans to build a septic tank at his home turned into an archeological discovery that has scientists bewitched.

The elderly high priest says he is now fascinated by his community’s history, which the rare find of dozens of massive stones has uncovered. These meter-long stones are believed to be from a 14th century temple complex that may have been the largest ever constructed on the Island of the Gods.

“I have become very interested in archeology since this was found, because we must know our history here in Bali. As a priest I need to know about this history so I can teach people,” said Bhujannga.

He is speaking of ruins of a Hindu temple unearthed recently during excavations into rice fields to extend his home in Penatih village, Denpasar. Workers struck the huge mudstone foundations of the temple at just 70 centimeters below the surface, and in doing so have altered the Denpasar history books.

Head of Bali’s Archeology Unit, Made Geria, says the discovery is unique due to the scale of the stones used in the ancient temple’s foundations and their location. 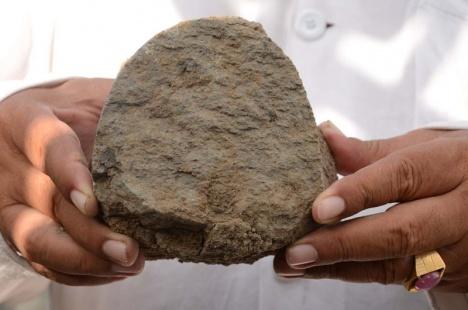 Found: A man displays a section of rounded mudstone found at the excavation site of a 700-year-old Hindu temple.

“It is extremely rare to find a structure like this here — it is unique for Denpasar. The structure dates back to the Bali Kuno period, so it predates the Majapahit period in Bali. Technologically it is also rare. Moving the stones into position means the traditional gotong royong [working together] must have been used. Each stone needs six men to lift and move,” says Geria via phone.

The extent of the site is still unknown. Current excavations show the Hindu temple extending around 100 meters running north-south. In one section alone are dozens of the massive foundation stones intersected with the remains of thick red brick walls, similar to those seen in Java’s Hindu temples that also date back centuries.

The discovery of the ruins was first reported to the archeology unit by Chandra Kirawan, who also lives within the compound where the huge foundations were found.

“This area was a rice field and we wanted to put in a septic tank and over the back a water tower. This was about three months ago. The workers hit the stones when they were digging for the septic tank and they were shocked,” says Chandra, adding he was curious what these giant stones could mean.

“We all thought there were just a few stones and the workers thought they were lucky they had found something so they pulled up some of the stones. Then we realized there were a lot of these big stones, so I immediately reported the find to the archeology department,” says Chandra.

Recognizing the find was rare in Denpasar; the archeology team was on site in less than 24 hours to undertake a preliminary dig establishing the scale of the 700-year-old foundations. Building plans for the family’s septic tank and water tower have been put on hold, perhaps permanently, with this discovery of what is thought to be Bali’s largest ancient temple complex.

“Having this discovery on our property makes me feel really proud and happy, because it is not something you would ever expect. I have lived here all my life and I never knew what history was under my feet. It was just a rice field,” says Chandra, who with his family currently guards the ruins in their backyard while welcoming visitors to the site.

He says daily locals drop by to see the ruins, all excited that their small village was once home to a sophisticated civilization that perhaps rivaled the great Javanese Majapahit Kingdom. Unlike Majapahit, there are no stories handed down generation to generation telling of this lost civilization.

“We have no stories, no histories of this temple and of its people. So our community was really surprised by this discovery. The archeology department says there may be much more still to be found under the rice fields here. They believe the section we have found is the eastern wall of the temple complex, it was huge and the biggest ever found in Bali. What is clear I think is that at the time there must have been a civilization made up of many people, because a big temple like this would have needed a lot of people to build it,” says Bhujannga.

What other historical surprises remain hidden under Penatih’s rice fields, what is yet to be uncovered and what learned of Bali’s ancient history is still to unfold, according to archeology head Geria.

It is hoped funding will be available from 2013 for extensive research and excavation of the site, which he says is unique to Bali.

Until the discovery of the Penatih site, most of Bali’s major archaelogical treasures have been unearthed in Gianyar, home to the ancient Goa Gajah, Yeh Pulu and Gunung Kawi ruins. 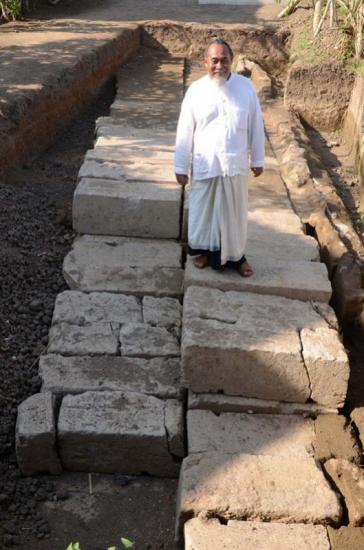 Discovery: Balinese priest Ida Rsi Bhujannga has developed an interest in archeology with the unearthing of ancient ruins at his Denpasar home.

Maybe more: It is believed there may be more ruins under Denpasar’s rice fields.

Life goes one: Centuries on, a family temple is being built alongside the 700-year-old Hindu temple ruin.