Since 2004, a series of archaeological investigations, exploration, and excavation have conducted in the Baishuihe River Valley by the Shaanxi Provincial Archaeology Institute. Recently, a survey in a total area of 24 landscape units was conducted within six square kilometers of Baishuihe River Valley. The discoveries including 203 house foundations, 28 burned earths, 41 ash pits (cultural stratum), 3 burials, 10 stepped surface of Yangshao and Longshan periods, in which 6 large-scale housing foundations in mid Yangshao period , large amount of cave-style house and urn burial grave during the Longshan period were unearthed and came to the prominence. 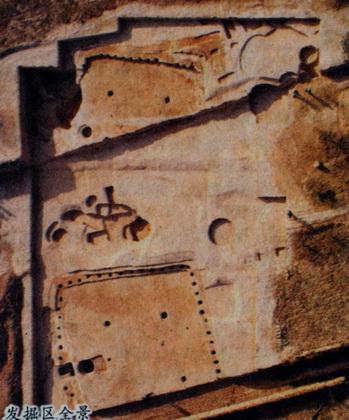 400,000 square meters of the Yangshao period remaining features distributed in Xicun of Baishuihe county, where 6 large-scale housing foundations in Yangshao period were discovered. From August to December 2010, 2 large-scale house foundations, 42 ash pits and 2 active surfaces of the mid-late Yangshao phase were exposed in an area of 1,000 square meters. The survival area of No. F1 house foundation is 263.4㎡, while its restored construction area is 364.85 square meters, which is the largest house in the same period. Another sample is F2 remaining building area of 112 square meters, and a restored construction area 240.66 square meters. Moreover, two house foundations are located at the southern edge of the Yangshao culture extent. The doors are facing to the south, and the house foundations are shaped in pentagon with two layers of wall. The ground is divided into upper and lower layers. Below the ground is mud mixed with grass, upon which is either fired or rammed earth. It is worth mentioning that the ground of these house foundations is white lime surface, which is the earliest use of lime for the treatment of the ground.
For the F1, there are 4 post-holes on the ground, 36 post-holes inserted in the inner wall, 3 post-holes remained outside the wall, and 2 post-holes were preserved on doorways. Combined with the deposit conditions within the house, interior and exterior walls inward dumping out, less pottery waste were discovered within the rooms,. It is assumed that F1 was initiative dumped area, walls and pillars were demolished before the inhabitants moved out. Construction of fireplace in F1 consists of three parts namely the operation room, fire chamber and ground stove. The operation room was connected to the fire chamber through slope doorway, and the fire chamber with a diameter of 1.8 meters, 2 meters deep. The fire chamber connected to the ground stove which shaped in nearly rectangle.

Unfortunately, there haven’t found doorway in the F2, and out of the door was a downward slope. Some red paint traces could be seen on the plaster of interior walls and on the ground. A different fireplace here built by two parts of fire door and fire chamber, in which the fire chamber was 1.1 meters, 60 centimeters deep, a diameter of about 1.4 meters of the fire chamber is in its next layers. In the foundation, there preserved 2 post holes on the ground, 21 within the interior walls. Viewing east wall profile, interior walls built on the lower ground composed of the fired clay fragments, fine pottery and small stones. Exterior wall disturbed F3, and all inner side of the walls had been burnt into red colour. Lower surface of the F2 appeared in dark and red due to heavy fire. With the fire chamber, sections, floor and wall conditions, it could be considered a small F2 was reconstructed after the demolished of F3 on the same site.
Current archaeological works attained some answers to specific questions, but also raised additional issues, such as the single-handle li, construction methods and techniques of large-scale house in mid-Yangshao period, as well as the settlement structure in Yangshao and Longshan periods. With further expansion of work, one can know more about the Baishuihe River Basin.    (Translator: Li Langlin)