Baby Back, Waaaay Back, Ribs 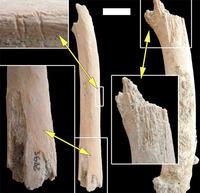 To date, no one has dug up a million-year-old cookbook, so one way archaeologists learn about the diet of early humans is by examining the fossilized bones of animals eaten long ago. But it's often difficult to tell who, or what, did the eating. Now scientists scrutinizing the remains of a prehistoric meal of antelope and deer ribs have identified a new variety of diagnostic bone markings that will help determine whether human ancestors dined on a carcass—or whether the diners were just ancient lions or hyenas.

More controversially, the paper's authors say the bone markings also suggest that the hominins, or early humans, of a million years ago brought home the bacon themselves by hunting or by driving carnivores away from fresh kills. Other scientists, however, say that the markings, while helpful for future fossil analysis, leave open the possibility that early humans were so-called passive scavengers who subsisted on the abandoned leftovers of other carnivores.

The debate is important because "the archaeological record is very stingy," says the study's lead author, paleoanthropologist Travis Pickering of the University of Wisconsin, Madison. So evidence on how humans got their food "is one of the few things we can … extrapolate from to talk about cognition and sophistication and social organization."

The new findings are a result of what Pickering calls a "happy coincidence." He and his colleagues were looking at 1.2-million-year-old fossilized bones of prehistoric antelopes and deer that they'd uncovered in the BK site at Tanzania's Olduvai Gorge, a famous fossil bed. The bones bore marks from stone tools, demonstrating that early humans had dined on them. But Pickering noticed that the outer surface of some of the fossil ribs had been peeled back. He'd seen the same kind of damage 20 years earlier, when he studied the bones left by chimpanzees in captivity.

Pickering points out that primates such as humans and chimps can use their hands to snap off a rib, in the process peeling away part of its outer covering. Primates can also hold a detached rib in one hand and use their teeth to peel away the outer section to get at the marrow. His team surveyed ribs that modern humans had snacked on and found many examples of such peeling.

The researchers' survey of ribs chewed by modern dogs, lions, and other predators, on the other hand, turned up only one example of rib peeling. The scientists concluded that the peeling and other clues showed that the Olduvai bones had been eaten by early humans, likely by the early humans known variously as Homo erectus or Homo ergaster.

Tooth marks are often equivocal and some prey bones, such as those that predate tool usage, don't show marks from stone tools. So peeling damage will provide another diagnostic tool to show whether a prey bone was eaten by humans or by something else, the authors say.

As modern BBQ fans know, rib meat is a highly desirable food, as are the organs encased in the ribs. The researchers argue in a paper published online this week in the Journal of Archaeological Science that large carnivores with a new kill hurriedly devour the rib meat as well as the heart and other viscera inside the rib cage. So if hominins were feeding on ribs and breaking open the rib cage, the authors argue, they, not carnivores, got to the carcasses first. That means the hominins must've killed their prey themselves or driven off animal carnivores.

Not so fast, say other scientists who weren't involved with the paper. "That's a very iffy argument," says paleoanthropologist Peter Andrews, an emeritus researcher at London's Natural History Museum. It's possible, he says, for carnivores to leave the ribs behind for scavengers. So the bones would bear peel marks even though the hominins hadn't procured the carcass themselves.

Paleoanthropologist Michael Pante of University College London says modern-day lions often leave lots of rib meat on a carcass. So evidence that hominins consumed the ribs doesn't necessarily mean the hominins nabbed the booty themselves. But Pante does concur with Pickering, based on other studies, that the hominins of roughly 1 million years ago were probably hunting or driving away primary predators. All parties agree that the latter technique , though known as aggressive scavenging, actually ranks close to hunting in the skills it requires.