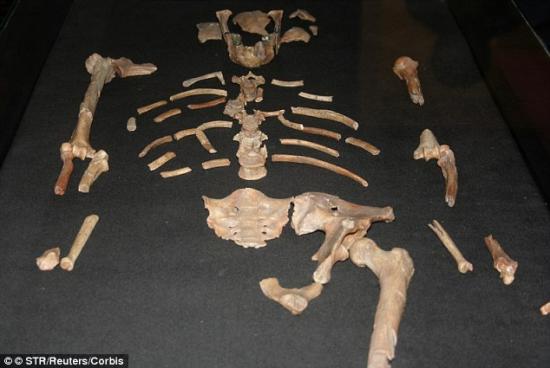 Lucy, arguably the world's most famous early human fossil, is not quite all she seems. A careful look at the ancient hominin's skeleton suggests one bone may actually belong to a baboon.

In November 1974, palaeoanthropologists Donald Johanson and Tom Gray made the discovery of a lifetime near the village of Hadar in Ethiopia: dozens of fossil fragments belonging to a single hominin skeleton dating back 3.2 million years.

Once the fragments had been pieced together, the skeleton was declared to be of the species Australopithecus afarensis. But the skeleton became known as Lucy, inspired by a Beatles song that blasted out of a cassette player as the researchers celebrated their discovery that evening.

Forty years later, thanks to its age and completeness, Lucy remains an important specimen. It shows, for instance, that our distant ancestors began to walk upright on two legs long before they developed big brains.

It's no surprise, then, that replicas of the skeleton are on display at museums across the world. But when Gary Sawyer and Mike Smith at the American Museum of Natural History in New York recently began work on a new reconstruction of Lucy's skeleton, with help from Scott Williams at New York University, they noticed something odd.

"Mike pointed out that one of the [vertebra] fragments, which no one, including me, had really paid close attention to, looked fairly small to fit with the rest of Lucy's vertebral column," says Williams.

Williams had been working with Marc Meyer at Chaffey College in Rancho Cucamonga, California, on the spinal column of another early hominin, Australopithecus sediba, and so the two researchers decided to study the fragment.

They soon concluded that it didn't belong to Lucy. "It was just too small," says Williams.

One possible explanation was that the vertebra fragment came from a second, juvenile member of Lucy's species. So Williams and Meyer did a comparative study that included vertebrae from other Australopithecus fossils. To satisfy a personal hunch, Williams also added vertebrae from other animals known to have lived in the Hadar region 3.2 million years ago, such as porcupines and pigs. The results showed, surprisingly, that the fragment may not have belonged to Australopithecus at all.

"Baboons were a close match, both in shape and size," says Williams. "So we think we've solved this mystery. It seems that a fossil gelada baboon thoracic vertebra washed or was otherwise transported in the mix of Lucy's remains."

He stresses, though, that the analysis, which he will present at a meeting of the Paleoanthropology Society in San Francisco next week, also confirms that the other 88 fossil fragments belonging to Lucy's skeleton are correctly identified. And the mislabelled baboon bone fragment doesn't undermine Lucy's important position in the evolution of our lineage.

There may be a simple reason why no one noticed that Lucy's remains included a baboon bone fragment.

Although many scientists have examined Lucy's skeleton, most experts have not worked as extensively on bones of the back relative to the limbs, says Dan Gebo at the Northern Illinois University in DeKalb. "Given that broken bones are always a problem and most of us are not vertebral specialists, it would not be unusual to make a small mistake."

Also, there was no sign of a baboon skeleton at the site where Lucy was discovered in 1974, says William Sanders at the University of Michigan in Ann Arbor. "So there was no reason to assume intermingling of elements between two different animals," he says.

Even so, Sanders wants to see the analysis in detail before he accepts that the vertebra fragment really does belong to a baboon. "Offhand, I don't see any morphological features in this element that cry out for recognition as a baboon," he says.

If the fragment really does prove to belong to a baboon, he says, "we can cut Don Johanson and his colleagues some slack".