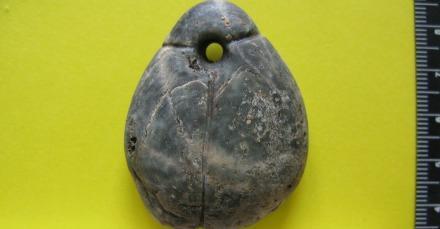 The Department of Antiquities, Ministry of Communications and Works, announces the completion of the 2012 excavations at the 9th millennium site of Ayia Varvara-Asprokremnos. The investigations, conducted during October and November 2012, were directed by Dr. Carole McCartney on behalf of the University of Cyprus working in partnership with Cornell University and the University of Toronto.

This excavation season focused on the recording of significant features, the documentation of finds and the redefinition of our understanding of the kind of human occupation that formed the site. Detailed evidence of the nature of the occupation at the site was recorded, as well as suggestions for the development of this earliest stage of the Neolithic on Cyprus predating the Cypro-Pre Pottery Neolithic B.

A complete floor surface (surface 320) was exposed for the first time in 10.000 years, exhibiting a dished form, raised above the central floor area providing a rough bench that runs along the circumference of the interior wall. As seen in the northern side of the feature, ash heaps and stone tools were stratified in a sequence of repeated use events. The presence of buried artefacts (usable, but abandoned) and evidence of erosional episodes indicate the punctuated character of the structure’s occupation, while the nature of the artefacts demonstrates the domestic character of the building.

Constructional features illustrate the significant degree of investment given to this building, including the deeply dished form of the building dug into bedrock and a 10-15 cm thick wall lining. The latter exhibits significant evidence of burning and was likely constructed of an organic super-structure of branches cemented in place by mud plaster. In contrast, the floor was simply made of trampled mud, refreshed by erosional washed sediments that appear to have collected during short term (perhaps seasonal) abandonment events.

Important new architectural evidence was uncovered with the continued excavation of feature F541 located at the southern end of the site. The eastern half of this feature was initially excavated during the 2011 season when F541 appeared to represent a shallow pit filled with ground stone and chipped stone tools and debris. The 2012 excavations revealed a shallow pit/hollow of greater circumference than anticipated with a smaller pit cut into the base of the feature. Burnt stones and ashy sediment recorded in the smaller feature imply that the pit was in fact a hearth constructed when F541 was initially utilized as the base for a simple structure, later transformed into a midden when in filled with occupation refuse. F541 appears to post-date the more elaborate F300 to the north. Τhe simple form of feature F541 suggests a decline in the investment applied to the construction of shelters utilized at the site, and a shift towards a more temporary architectural form during later phases of occupation at the site. A large carefully engraved teardrop-shaped picrolite pendant, representing a more developed form of ornament than those recovered previously, was recovered from the top of the F541 midden-like deposits in 2012.

Renewed excavation of an area to the NE of F541 uncovered a unique arrangement of chalk slabs encircling a large hearth-like setting of burnt stone. This provides important information regarding the activities conducted at the site. Below the chalk slab arrangement rest, in a partial hollow feature, hundreds of ochre pigment nodules. This feature, which is yet to be fully excavated, combines a high density of multi-coloured pigments (including red, yellow, orange, purple and grey ochre as well as bright green, terra verde). Such pigments are readily available only 1km away from the site in the village of Mathiati. The hollow was clearly cut into natural sediments along its southern and western edges dug out to create a level surface extending to the north where a number of hearth features were constructed with a series of three shallow pits and stake holes dug into the northern end of the area. One of the shallow pits (F590) exhibited a well-built lip, which together with a series of identical stake holes arranged along its eastern flank combine to illustrate a complex installation on a Neolithic surface where activities involving ochre took place.

Like F531 (excavated in 2011), which similarly showed a dense concentration of pigments, grinding tools and scrapers, the chalk slab area adds more convincing evidence of the use of fire that in conjunction with the presence of shallow pits and numerous (wooden) stakes may illustrate evidence for the tanning of animal (pig) skins at the site. Other uses of ochre including tool mastics and decoration are clearly also possible, while the significant amount of ochre at the site suggests that this abundant Cypriot resource was already exploited intensively at the beginning of the Neolithic.