The Diprotodon optatum, a marsupial mega-herbivore sometimes known as the Giant Wombat or the Rhinoceros Wombat, grew to three metres in length and two metres in height. Its closest surviving relatives are the wombat and the koala. Peter Murray

The first Australians hunted giant kangaroos, rhinoceros-sized marsupials, huge goannas and other megafauna to extinction shortly after arriving in the country more than 40,000 years ago, new research claims.

A team of scientists from six universities say they have put an end to the long-running debate about the cause of the sudden disappearance of giant vertebrates from the Australian ecosystem, and the dramatic change to the landscape that followed.

Soon after the beasts disappeared, there was a rapid shift in vegetation across Australia. Once covered by patches of rainforest separated by areas of open grassland, it was soon smothered by eucalypt forest, the researchers say.

The change was caused by a decrease in consumption of plant material by large herbivores, which allowed forest to spread and also resulted in a build-up of dry fuel for bushfires.

In the past 100,000 years, many of the largest animals on Earth became extinct. The reasons remain contentious. In recent years, some scientists have argued that habitat loss through climate change or fire was the killer blow.

But the latest argument, published today in Science, refutes this.

Research leader Chris Johnson, from the University of Tasmania School of Zoology, said the team solved the mystery of the disappearance of Australia’s megafauna by using a method of tracking large herbivores through time by counting the spores of fungi in their dung.

Professor Johnson said the biggest herbivores – “rhino-sized wombat-like marsupials called Diprotodons, giant kangaroos, a goanna bigger than the living Komodo dragon, a giant goose twice the size of the emu and many others” – produced vast quantities of dung, and that there were special fungi that lived in it.

“The spores of these fungi can be preserved in sediments in swamps and lakes,“ Professor Johnson said. "As those sediments accumulate over time, they create a historical record of the abundance of very large herbivores in the environment.

“Pollen and charcoal particles are trapped in the same sediments, so that it is possible to match up the history of abundance of large herbivores with changes in vegetation and fire. Then, radiocarbon can be used to date these things.” 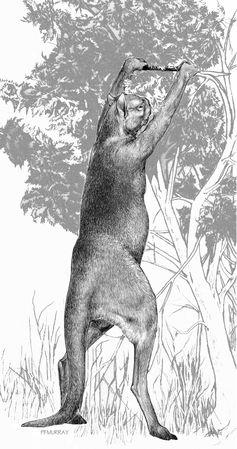 Sthenurus, the giant kangaroo, grew up to three metres in length, or about twice as big as its modern-day ancestor. Peter Murray

Professor Johnson said the research focussed largely on a swamp called Lynch’s Crater in northeast Queensland, where the sediment record reaches back to 130,000 years ago.

“It showed that the abundance of large mammals was stable until just before 40,000 years ago, when it suddenly crashed.

“This rules out climate change as a cause of extinction, as there were several periods of climate drying before the extinction and they had no effect on abundance. And when the animals did go extinct, the climate was stable.

Habitat change could not have been responsible for the loss of the large marsupsials, because the grassy forest expanded only after the spores abruptly declined.

“But the extinctions followed very soon after the time that people arrived in the region – so it seems that people did it,” Professor Johnson said.

“Our study didn’t directly address how people caused extinction, but the most likely mechanism is hunting. Quite a bit of other circumstantial evidence suggests that.”

The results also show that the extinctions were quickly followed by massive ecological change.

Gavin Prideaux, a lecturer in vertebrate palaeontology in the School of Biological Sciences at Flinders University, said the research was an important contribution to the understanding of what happened “when 90% of our large terrestrial species disappeared, depriving us of the sight of giant short-faced kangaroos, marsupial "lions”, giant horned tortoises and herds of Diprotodons meandering through the outback."

The research team had presented compelling data in a field of inquiry that “aches under the strain of opinion pieces and the tired reworking of published data … The timing of the inferred extinction coincides with early human presence in the region, but not with significant climatic change.”

This supported a mounting number of studies that have argued that climate change was not primarily responsible for extinctions in other parts of the continent, Dr Prideaux said.

John Alroy, a Future Fellow in the Department of Biological Sciences, Faculty of Science at Macquarie University, said the new research put all debate over the matter to rest. “The key new data are the spore counts, and in combination with the charcoal and rainforest pollen data they tell the whole story,” Dr Alroy said. “There is simply no reasonable way to argue with the authors' conclusions.”

But Judith Field, a Senior Research Fellow in the School of Biological, Earth and Environmental Sciences at The University of New South Wales, said the argument was flawed for several reasons.

Chief among these was the claim by the authors that climate was stable through the period in question – “the opposite is generally accepted”, Dr Field said – and the unproven assumption that megafauna were so abundant that their disappearance would have triggered a drastic change in vegetation.

“The facts of the matter are that most megafauna were extinct nearly 100,000 years before human arrival and there is no evidence for any particular time period to be significant in terms of faunal extinctions.”

Dr Field added that there was no evidence from archaeological sites that humans hunted megafauna. She said the earliest evidence for human occupation in northeast Queensland suggested their populations were small.

This story is published courtesy of the The Conversation (under Creative Commons-Attribution/No derivatives).