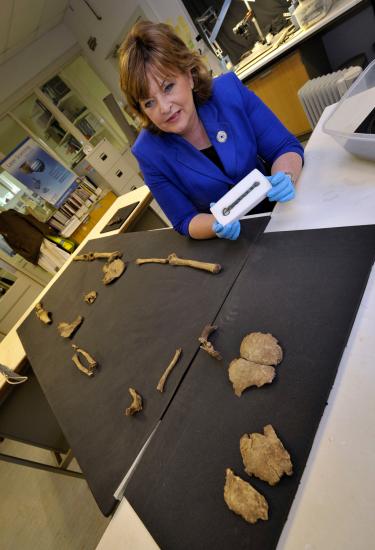 Fiona Hyslop holding a belt found with the skeleton believed to be that of King Olaf Guthfrithsson or one of his entourage. Image: Historic Scotland

A skeleton discovered on an archaeological dig in East Lothian may be that of Olaf Guthfrithsson - an Irish Viking who was the King of Dublin and Northumbria from 934 to 941 – or a member of his entourage.

The hypothesis - which will be published next year by the Society of Antiquaries of Scotland in a book funded by Historic Scotland - was revealed as Fiona Hyslop, Cabinet Secretary for Culture and External Affairs today visited Newgrange, a Neolithic monument in County Meath, to highlight archaeological links between Scotland and Ireland. 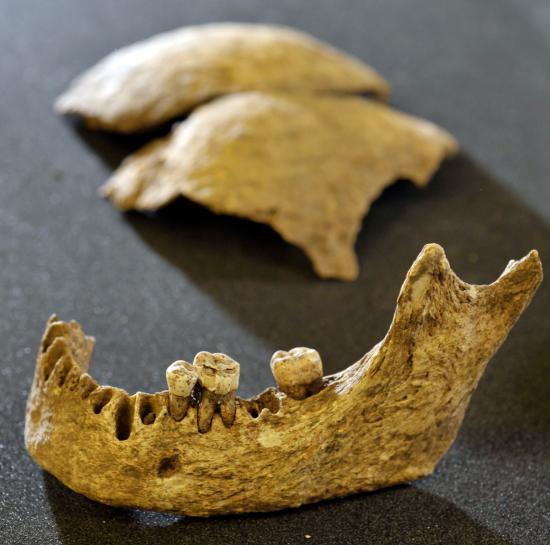 Remains of a skull thought to be that of King Olaf Guthfrithsson. Image: Historic Scotland

The remains, which were excavated by AOC Archaeology Group at Auldhame in East Lothian in 2005, are those of a young adult male who was buried with a number of items indicating his high rank. These include a belt similar to others from Viking Age Ireland.

This artefact signals that the body was that of a man who may have spent time in the household of the kings of the Uí Ímar dynasty which dominated both sides of the Irish Sea from about 917 until at least the middle of the 10th century.

Olaf Guthfrithsson sacked Auldhame and nearby Tyninghame - both part of a complex of East Lothian churches dedicated to the eighth-century Saint Balthere - shortly before his death in 941, and the proximity of the burial to the site of the conflict along with the high-status items found with the body, and the age of the skeleton, has led archaeologists and historians to speculate that it may be that of the young Irish king or one of his followers.

In the absence of known living descendants, DNA analysis cannot be carried out to confirm the identity of the body, leaving archaeologists and historians to rely on circumstantial evidence to reach their hypothesis.

Olaf Guthfrithsson was a member of the Uí Ímar dynasty. In 937 he defeated his Norse rivals in Limerick, and pursued his family claim to the throne of York. He married the daughter of King Constantine II of Scotland and allied himself with Owen I of Strathclyde.

Fiona Hyslop, Cabinet Secretary for Culture and External Affairs said: “This is a fascinating discovery and it’s tantalising that there has been the suggestion that this might be the body of a 10th century Irish Viking king. Scotland and Ireland’s archaeological communities enjoy a close working partnership, and this find and subsequent research is of particular interest to both, further emphasising the myriad ways in which the two countries’ histories are entwined.”

Dr Alex Woolf, senior lecturer in the School of History at the University of St Andrews, and a historical consultant on the project said: “Whilst there is no way to prove the identity of the young man buried at Auldhame, the date of the burial and the equipment make it very likely that this death was connected with Olaf’s attack on the locale. Since we have a single furnished burial in what was probably perceived as St Balthere’s original foundation there is a strong likelihood that the king’s followers hoped that by burying him in the saint’s cemetery he might have benefitted from some sort of post-mortem penance.”