Auga dos Cebros (Espagne): contact between Mediterranean and Atlantic cultures before the Romans 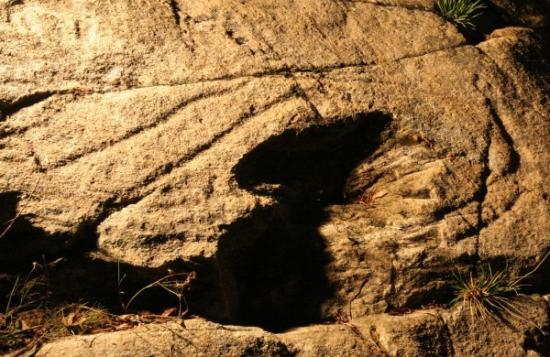 Archaeologists are beginning to change their views of the contact made between Atlantic and Mediterranean cultures before the Romans, says Xosé Gago, with increasing evidence that connections were earlier and more intense than previously thought.

The Atlantic coast of northern Spain has an unusually high concentration of Bronze Age rock art, and among them is a unique piece of evidence: a carving of a boat unlike any other seen on the Atlantic coast.

This rock art panel is known as Auga dos Cebros. But although there are many depictions of boats in Atlantic Europe, this one is unique, and vital for research.

Archaeological discoveries have already shown that the relationship between Atlantic Galicia and the Mediterranean consolidated during the Iron Age. Punic goods and a bronze axe known to be used for Mediterranean trade have been excavated at A Cabeciña Costa dos Castros, while just 50km up the coast, the discovery of a Punic garum factory dating to 600 BC shows that Mediterranean traditions were being incorporated into Atlantic life. Connections were more than just commercial, and closer than previously thought. But when did the first contacts take place?

That’s a very difficult question to answer, but the Auga dos Cebros rock art panel provides a unique clue. This panel depicts a Mediterranean ship, thousands of miles from home. It is, in fact, thought to capture the moment when Atlantic and Mediterranean people met for the first time. 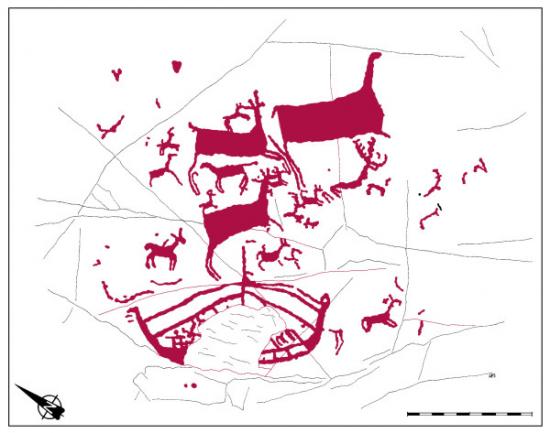 Drawing of the petroglyph, including damage to the panel caused by an explosion. Via Costa dos Castros.

To unravel this mystery, researcher Javier Costas Goberna embarked on an epic virtual journey throughout Europe, searching for comparable boat depictions. This scientific adventure led him to travel in person as far as Turkey, in a constant quest to date and identify the petroglyph.

He started his research with what seemed the most logical step: looking for parallels with boat petroglyphs in other Atlantic regions, such as Cádiz (South Spain), Great Britain and Scandinavia. He did not succeed in finding a single comparable depiction.

The main reason was a question of naval engineering: the Atlantic boats were designed to be mainly oar-propelled, but the boat depicted in the Auga dos Cebros rock panel clearly uses sails.

Depiction of a Nordic boat

So Goberna continued his quest in Mediterranean waters. Here he had a much larger number of objects to study: not just petroglyphs, but also murals, pottery embellishments, reliefs, stamps, coins and even boat descriptions in ancient literature, such as Homer’s Odyssey.

After extensive research, Goberna found out that many of the Mediterranean boat models share a series of features with the Auga dos Cebros boat. One interesting shared feature is the shape of the bow and stern, both slightly opened outwards.

The other is the use of sails as the main propulsion method, complemented by oars. The boat petroglyph depicts a mast that would have probably held a square sail, and a series of perpendicular lines along the boat’s hull probably representing benches for the oarsmen. These features led the researcher María Ruiz-Gálvez Priego to relate the Auga dos Cebros boat with Aegean models from the 2000BC., mainly with those found on Cretan stamps.

As Goberna rightly points out, the lack of detail on the Auga dos Cebros petroglyph prevents us from establishing a concrete reference model, although we can safely say the boat has clear points in common with Mediterranean boats, from Egypt to Tyre, and particularly with Aegean models.

To get a better grasp of what the Auga dos Cebros boat looked like in real life, Goberna travelled to Turkey to visit the reconstruction of a shipwrecked boat from 1400BC.

Reconstruction of a Mediterranean shipwreck from 1400BC in Turkey.
Just imagine a boat similar to the one on the photo leaving the Mediterranean to explore the Atlantic waters and eventually arriving on the Galician coast. Its shape, the strange men sailing it, the goods they carried and the new language they spoke must have had a huge impact on the inhabitants of Galicia; so huge that the boat was engraved in stone to record that day forever.

That day marked the beginning of a wave of change as Mediterranean and Atlantic cultures embraced for the first time. We are immensely fortunate that this unique feature survived 4,000 years to the present day. Now it is our responsibility to preserve it for future generations.

The current state of the rock art panel is far from perfect. It is surrounded by overgrown vegetation and is endangered by the changing course of a nearby river. That is why we have to start taking action. Clearing the overgrowth is the first step of a series of measures we want to carry out to prevent further damage to the petroglyph and also to make it easier for visitors to access the area of the panel. -