Athènes (Grèce) : The central role of rivers and springs

The central role of rivers and springs in ancient Athens
Now covered over or dried up, the Ilissos, Eridanos and Kifissos gave life to the city

Archaeologists have many tools at their disposal these days, from handpicks and sharp triangular trowels for excavation to sophisticated computer-graphic software and high-tech laboratory processes for virtual reconstruction and date determination. But the most basic, powerful equipment in the diverse archaeological toolkit remains the imagination. With the ancient landscape in Athens now buried beneath asphalt streets and massive modern buildings, the imagination is more important than ever for both archaeologists and laymen alike when considering the physical setting in which past Athenians once pursued their daily lives. The huge disparity between the former, comparatively natural landscape that lay around the Athenian Acropolis – once the center of the ancient city – and today’s starkly unnatural, paved-over urban environment makes it difficult to comprehend just how different Athens once was but small topographical clues survive on and under the ground, in the Acropolis Museum and among the words of ancient authors. 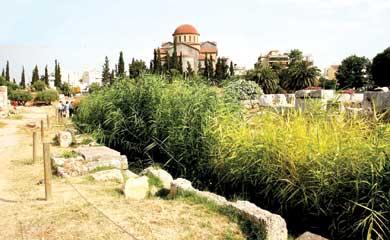 Open, free-flowing watercourses and freshwater springs are one of the most conspicuous natural features of the ancient landscape missing in today’s central Athenian environment. Two perennial rivers flowed through ancient Athens – the Eridanos and the Ilissos. The Eridanos, rising from beneath Mount Lycabettus, followed a course north of the Acropolis, past the Athenian Agora and the gates and cemetery of the Kerameikos. The Ilissos, streaming down from Mt Hymettus, where its headwaters included a spring still to be seen at Kaisariani Monastery, ran south of the Acropolis along a route today delineated in part by sections of Vassileos Constantinou, Ardittou and Kallirrois streets. These two rivers (actually streams) came together west of the Acropolis, flowed into the larger Kifissos, and eventually emptied into the sea at Faliro Bay.
The Eridanos and Ilissos rivers were vital sources of fresh water in antiquity for drinking, washing, cooking, religious purification, industry and waste removal. Portions of the Eridanos, running through the heart of the ancient city, were already lined with built walls by 478 BC and its waters appear from historical accounts to have been occasionally less pure than those of the further outlying Ilissos. The geographer Strabo (9.1.19) reports in the early 1st century AD that although the Eridanos had previously been reputed to be unfit even for animal consumption, it was now “pure and potable water... outside the Gates of Diochares... near the Lyceum.” Pollution in antiquity, like today, was a problem that required monitoring and occasional regulation. An inscribed 420 BC decree discovered near the Lysicrates Monument forbids the softening of animal hides in the Ilissos River upstream of the Sanctuary of Hercules (a spot south of the Olympieion, where today Vouliagmenis Avenue intersects Ardittou and Kallirrois streets).

The riverbanks of ancient Athens were areas where city dwellers could find not only water but also cool, shady retreats in which to socialize, worship, practice military and athletic skills or pursue their studies. To imagine the relative lushness that once characterized these areas, one might extrapolate from the delightful microenvironment still preserved in the Kerameikos, where the Eridanos’ now-tiny channel continues to be lined with tall reeds and seasonally inhabited by croaking frogs. The Ilissos, too, until the late 19th century, was abundantly reedy, frequently flooded and known locally as a haven for frogs. Unlike today, however, trees grew sparsely in ancient Athens. The slopes and plains surrounding the Acropolis were probably quite barren of trees – just as they still appear to be in early modern paintings and archival 19th- and early 20th-century photographs. But along riverbanks, trees and bushes were a more common feature. Plato (“Phaedrus” 229) describes Socrates and Phaedrus strolling along the northern bank of the Ilissos, crossing the stream bed, then finding a large plane tree (platanos) under which to rest – probably located, according to archaeologist John Travlos, at the foot of Ardittos Hill where the Panathenaic Stadium was later built. Phaedrus remarks, “I am fortunate, it seems, in being barefoot; you are so always. It is easiest then for us to go along the brook with our feet in the water and it is not unpleasant, especially at this time of the year and the day.” Then he asks Socrates, “Do you see that very tall plane tree?... There is shade there and a moderate breeze and grass to sit on...”
Three gymnasia were erected in the 6th century BC beside Athens’ rivers: the Academy near the Kifissos, the Lyceum near the Eridanos and the Kynosarges near the Ilissos. Shrines and temples were also familiar riverside features – especially along the Ilissos. The area of the Kallirroe Spring, which once spilled into the Ilissos just south of the Olympieion, was a particular focus of worship. Participants in the Lesser Eleusinian Mysteries may have purified themselves there. Nearby, altars, shrines and temples were dedicated to various divinities including Boreas, the Ilissian Muses, Cronus and Rhea, Zeus and Hera, Apollo Delphinios, Artemis Agrotera, Pan, Acheloos and the Nymphs. Athenian brides on their wedding day bathed in sacred water drawn from the Kallirroe Spring in special vessels (loutrophoroi), then made offerings of these vessels at the shrine of the Nymphe on the south slope of the Acropolis. Painted loutrophoroi recovered from the shrine, depicting these premarital purification rites, are displayed in the Acropolis Museum. Natural springs and fountain houses also existed around the Acropolis itself, including one within a cave at the back of the Asclepius sanctuary on the south slope and another hidden within a deep fissure (the Klepsydra) on the northwest slope.
The importance of local water resources, especially rivers, to the ancient Athenians was visually demonstrated by two sculpted figures of river gods accompanied by two water nymphs at each end of the Parthenon’s Western Pediment (as reconstructed by specialist Olga Palagia), which represented the Eridanos and Ilissos rivers and provided a geographical framework for the pediment’s main scene – just as the real rivers similarly framed the city of Athens. The Ilissos finally disappeared during street development in the 1950s but the Eridanos can still be seen, and heard, in the Kerameikos and beneath Monastiraki Square (see below).

Flowing freely
Three members of the former architectural team responsible for the now-completed renovation of Monastiraki Square, Nikos Kazeros, Christina Parakente and Eleni Tzirtzilaki, once eloquently protested a plan to fully encapsulate the Eridanos River within a glass cover inside the Monastiraki metro station – where its ancient, stone-built channel has been incorporated as an open-air archaeological exhibit.
In a blog dated Wednesday, August 27, 2008, they wrote: “We feel that everybody has the right to see and hear the Eridanos stream; such contact is another way of experiencing history and civilization, along with the hidden natural landscape of the city.”