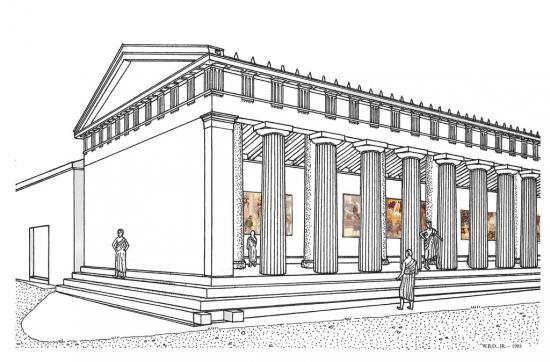 A reconstruction of the Stoa Poikile.

The Stoa Poikile, or Painted Portico, was one of the major structures in Athens’ Classical Agora, the center of the city’s political and public life. While the Agora has been extensively excavated and visited over the past 80 years, the Athens-Piraeus railway runs through the north of the site, and the northernmost sections lie beneath the vibrant Monastiraki neighborhood. Recent land purchases and expropriations by the American School of Classical Studies in Athens will allow archaeologists to excavate the famous Stoa Poikile, one of the northernmost structures in the Agora. A bit of theStoa Poikile was exposed during the 1981 excavation season, but the rest has been inaccessibly covered by modern buildings—until now.

The Stoa Poikile was built in the fifth century B.C.E. and quickly became a center for Athenian art where paintings by Mikon, Panainos, Polygnotos of Thasos and others were put on display. The traveling second-century C.E. geographer Pausanias provides us with extensive descriptions of the art displayed at the Stoa Poikile (see below). 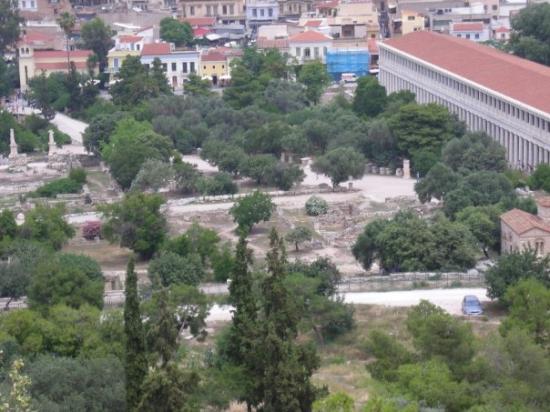 The eastern portion of the Athenian Agora. The renewed Stoa Poikile excavations will take place near the upper-left corner of this photograph.

In the early third century B.C.E., philosopher Zeno of Citium, the founder of Stoic philosophy, used the Stoa Poikile to teach his students. The Stoics were named after their classroom—the Stoa Poikile. Centuries later, the philosophy taught in the Stoa Poikile came to life again in New Testament letters, though the extent to which Paul’s letters reflect his connection to the principles of Stoic philosophy has been a popular scholarly debate for centuries. The new excavations in the Athenian Agora will uncover the cradle of this school of thought.

Pausanias on the Stoa Poikile

As you go to the portico which they call painted, because of its pictures, there is a bronze statue of Hermes of the Market-place, and near it a gate. On it is a trophy erected by the Athenians, who in a cavalry action overcame Pleistarchus, to whose command his brother Cassander had entrusted his cavalry and mercenaries. This portico contains, first, the Athenians arrayed against the Lacedaemonians at Oenoe in the Argive territory. What is depicted is not the crisis of the battle nor when the action had advanced as far as the display of deeds of valor, but the beginning of the fight when the combatants were about to close.

On the middle wall are the Athenians and Theseus fighting with the Amazons. So, it seems, only the women did not lose through their defeats their reckless courage in the face of danger; Themiscyra was taken by Heracles, and afterwards the army which they dispatched to Athens was destroyed, but nevertheless they came to Troy to fight all the Greeks as well as the Athenians them selves. After the Amazons come the Greeks when they have taken Troy, and the kings assembled on account of the outrage committed by Ajax against Cassandra. The picture includes Ajax himself, Cassandra and other captive women. 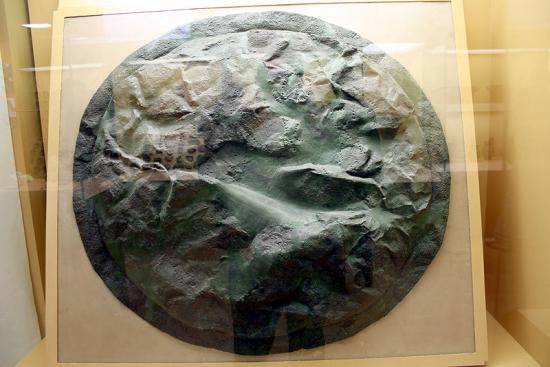 When Pausanias visited the Stoa Poikile in the second century C.E., he described the Spartan shields on display from the Athenian defeat of Sparta in the famous battle of Sphacteria. This shield, now housed in the Agora Museum in Athens, features an inscription reading: The Athenians, from the Lacedamonians (Spartans) at Pylos (an ancient city on the mainland near Sphacteria).

At the end of the painting are those who fought at Marathon; the Boeotians of Plataea and the Attic contingent are coming to blows with the foreigners. In this place neither side has the better, but the center of the fighting shows the foreigners in flight and pushing one another into the morass, while at the end of the painting are the Phoenician ships, and the Greeks killing the foreigners who are scrambling into them. Here is also a portrait of the hero Marathon, after whom the plain is named, of Theseus represented as coming up from the under-world, of Athena and of Heracles. The Marathonians, according to their own account, were the first to regard Heracles as a god. Of the fighters the most conspicuous figures in the painting are Callimachus, who had been elected commander-in-chief by the Athenians, Miltiades, one of the generals, and a hero called Echetlus, of whom I shall make mention later.

Here are dedicated brazen shields, and some have an inscription that they are taken from the Scioneans and their allies, while others, smeared with pitch lest they should be worn by age and rust, are said to be those of the Lacedaemonians who were taken prisoners in the island of Sphacteria.

Here are placed bronze statues, one, in front of the portico, of Solon, who composed the laws for the Athenians, and, a little farther away, one of Seleucus, whose future prosperity was foreshadowed by unmistakable signs.