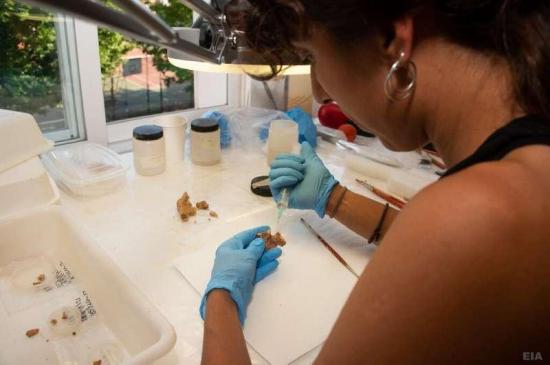 Until now, the oldest hominid fossil found in Europe was a jawbone which was determined to be 1.2 million years old.

A jawbone fragment discovered in northern Spain last month could be the oldest known fossil of a human ancestor found to date in Europe, Spanish paleontologists said Friday.

The researchers said the fossil found at an archaeological site on June 30 in northern Spain's Atapuerca mountain range is around 1.4 million years old.

Until now, the oldest hominid fossil found in Europe was a jawbone found at the same site in 2007 which was determined to be 1.2 million years old.

Atapuerca contains one of the richest records of prehistoric human occupation in Europe.

Researchers will now have to "complete" their first estimate for the age of the jawbone fragment using scientific dating techniques, palaeoanthropologist Jose-Maria Bermudez de Castro, the co-director of the Atapuerca research project, said during a news conference.

But since the jawbone fragment was found some two meters below the layer of earth where the jawbone in 2007 was found, "it is logical and reasonable to think it is older," he added.

The scientific dating of the jawbone fragment will be carried out at the National Center for Research on Human Evolution in Burgos, a city located about 10 kilometers (six miles) from Atapuerca.

The process should take between six to eight months to complete, Bermudez de Castro said.

The analysis could help identify which hominid species the jawbone fragment belongs to and better understand the human beings evolved on the European continent.

Scientists have so far been unable to determine with certainty which species the jawbone discovered in 2007 belonged to.

The fossil could correspond to the species called Homo antecessor, discovered in the 1990s.

The Atapuerca Foundation which runs the archaeological site said in a statement that is "very likely" that the jawbone fragment "belongs to one of the first populations that colonized Europe".

The archaeological site of Atapuerca was in 2000 included on UNESCO's list of world heritage sites, giving it access to United Nations conservation funding.

It contains thousands of hominid fossils and tools including a flint discovered in 2013 that is 1.4 million years old.