Atapuerca (Espagne) : A section of adult femur dated from years 500,000 ago

A section of adult femur dated from years 500,000 ago has been discovered in excavations at the Atapuerca site at Sima de los Huesos – the Pit of Bones - in Burgos. It’s from ‘homo heidelbergensis’ – ‘Heidelberg Man’, and will give experts important information on the height and weight of the hominids. 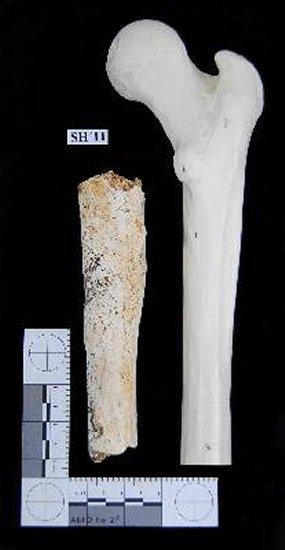 It was a surprise find on the last day of the season’s excavations and, it’s hoped, can be matched up with other fragments of femur which have been unearthed there in previous digs. They also found nearby fragments of ribs and skull and a tooth.

The dig this year was concentrating its efforts on recovering fossilised bones from bears which fell into the shaft thousands of years ago, and did not expect to find any human fossils in that area. El Mundo reports that the team has recovered from the site a complete bear skull, plus another of a lion.

Archaeologists have recovered more than 5,000 fossils from the Pit of Bones over the decades of excavations at Atapuerca, which correspond to a group of some 30 individuals of Heidelberg Man.