Researchers say they have found evidence that primitive humans ate dogs, wild cats, foxes and even badgers between 3,100 and 7,200 years ago 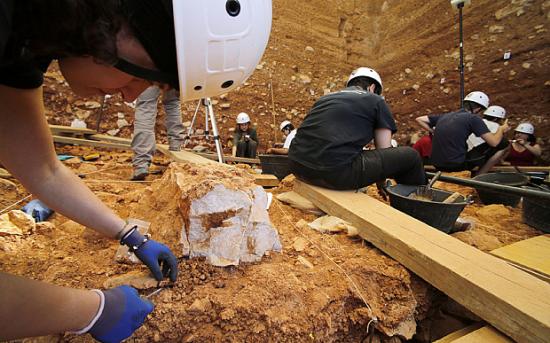 Workers carrying out an excavation at the archaeological Site of Atapuerca, in the Sierra de Atapuerca, province of Burgos, Spain Photo: CESAR MANSO/AFP

Europeans survived on a diet of domestic dogs, wild cats, foxes and even badgers until just 3,000 years ago, reveals a new study.

Archaeologists found human teeth marks on remains in a cave in Spain, dating back to between 3,100 and 7,200 years ago.

The cave at Atapuerca was used by primitive humans to shelter flocks of sheep, but small carnivores were also eaten, according to the findings.

Dr Patricia Martin, of the Catalan Institute of Human Paleoecology and Social Evolution, said: "In El Mirador Cave the dogs were disarticulated, defleshed and boiled."

The unusual practice could have happened at times of famine or food shortage.

Dr Martin said: "It's one of the possibilities.

"However, in some Asian cultures dog meat is considered a rich source of protein or as a delicatessen meat. It cannot be excluded in some cases the objective was to obtain the skin of these animals."

Wild cats and badgers were also boiled and consumed. Hunting wild carnivores would have been difficult so the animals were probably captured accidentally and subsequently consumed.

Dr Martin said: "Carnivore consumption has been identified in the Holocene levels of El Mirador Cave.

"This is some of the oldest evidence documented either in the Iberian Peninsula or in Europe as a whole, and it's the first time human tooth marks are used to confirm the human consumption of these carnivores.

"Dog consumption is sporadic but occurs repeatedly in time, whereas the consumption of small wild carnivores is more limited in time.

"These practices could be linked with the provision of extra food during periods of shortage and/or with meat of special consideration, especially dog meat."