A jumble of stones uncovered here offers undisputed evidence of a burial mound dating from the mid-seventh century that very likely was the final resting place of an emperor, researchers say.

The first traces of the structure, one of the largest from this period in Japan, were uncovered three years ago. At that time, a section of outer moat was found.

As for who was buried in the mound, the answer can only be guessed at.

The overall site is vast. The presumed square burial mound alone is estimated to have measured 70 meters on each side, leading scholars to speculate that a very high-ranking individual, almost certainly an emperor, was buried there.

Researchers at the Archaeological Institute of Kashihara, Nara Prefecture, announced their findings March 1. 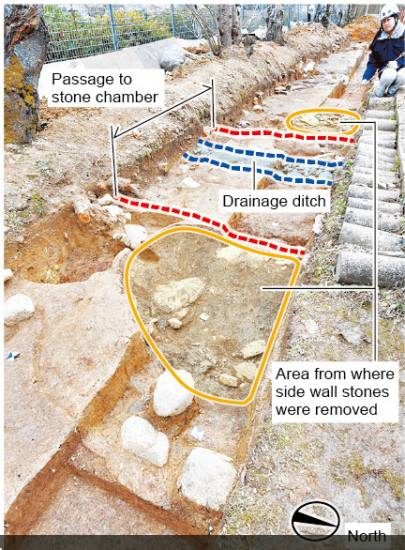 They found remnants, such as a drainage ditch and areas where stones were removed, that indicate the burial mound was from a later age than the keyhole-shaped ones of the Kofun period (late third to seventh centuries)

The later burial mounds had an underground passage to the stone chamber where the deceased was laid to rest.

The vastness of the site, only a small portion of which has been excavated, led to speculation that the mound was constructed for Emperor Jomei (593-641), the father of two better-known emperors, Tenji (626-671) and Tenmu (?-686).

Another candidate is Soga no Emishi (?-645), an important regional warlord who was ousted after a power struggle.

The Koyamada ruins created a stir among archaeologists after digging began in 2014 as part of a school rebuilding program. One of the initial findings was a moat lined with boulders along one of its slopes.

Those remnants led to speculation the site might have been a burial mound, a past residence of a powerful figure or even a large garden.

The latest discoveries are from a dig about 65 meters south of the moat. There, the researchers excavated an area measuring more than a meter long in a north-south direction and about 1.5 meters long in an east-west direction from where stones were likely removed to construct the side walls of the passage that led to the underground stone chamber holding the deceased.

The distance between those two areas indicate that the passage was 2.6 meters wide, which is larger than the one at the Ishibutai burial mound, also in Asuka. That mound, from the early seventh century, is believed to be where Emishi's father, Umako, is buried.