Loom weights dating back 2,500 years that were found in the ancient Assoss show the textile industry has existed in the region since ancient times 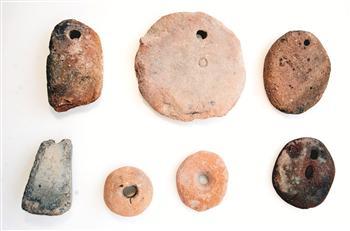 Loom weights were used to prevent the threads of ropes from interlacing each other and prove that weaving has been existed since ancient times. AA Photo

The northwestern province of Çanakkale’s Ayvacık district is home to one of the most important areas of Turkey’s textile industry. The district is famous for kilim carpets produced in different colors and designs, but as of late 2,500-year-old loom weights recently found in the ancient city of Assoss, within the borders of the district, have brought the district even more fame.

Ayvacık was one of Turkey’s significant centers, especially in regards to stockbreeding, Çanakkale Onsekiz Mart University (ÇOMU) Archaeology Department Chairman and head of the Assos excavations, Professor Nurettin Arslan said. The region is home to many small and large cattle breeds, Arslan said. “We have claimed that the most important means of existence in Assos in ancient times was stockbreeding. This is why the leather trade was such a developed job in Assos. The fact is that the head of a cow or an ox shows us the importance of stockbreeding in the town.”

The art of weaving in ancient times was a bit different compared to the weaving of today, Arslan said. “In the textile industry, sheep’s and goat’s wool is used. We have a significant discovery on our hands regarding rope production. Also, we have found loom weights that were used in ancient weaving looms and we call them ‘ağırşak.’ Ropes are hung from the loom and these loom weights, which are made of earthenware, are attached to these ropes. The weights are also used to prevent the threads of ropes from interlacing with each other.”

Surface surveys showed there could have been a small weaving atelier in an area next to the Ancient Theater, according to Arslan. The loom weights uncovered came in various types, he said. “Some of them are round and some of them are cubic. People used even broken ceramic pieces in this period by making a hole in the center of them. There are seals, names or descriptions on some of these weights. They date back to 2,500 years ago.”

These findings showed that the textile industry had been in existence in the region for an incredibly long time. “Assos was also one of the important ports in ancient times. It is mentioned in the Ottoman documents. Valonias collected from Çanakkale districts were brought to Assos and exported through this port. Valonia is a significant factor to paint the fiber used in textile industry and to process the leather,” said Arslan, adding that Ayvacık was one of rare places where some traditions have continued since the ancient times.