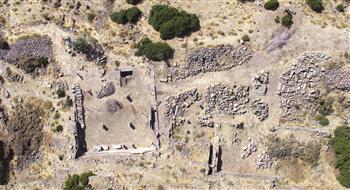 The Parliament building in Çanakkale’s ancient city of Assos dates back 2,400 years ago. It was built by the members of one of the leading families in the city. AA photos

The oldest Parliament building in the ancient era was established in the ancient city of Assos 2,400 years ago in the northwestern province of Çanakkale. The ancient city is located within the borders of the Ayvacık district. Home to Plato's second academy, Assos hosted another illustrious Greek philosopher, Aristotle, in the 4th century.

The head of the excavations in the ancient city, Çanakkale Onsekiz Mart University academic Professor Nurettin Arslan said the Parliament buildings were first discovered in 5th and 6th century B.C. in Athens and democracy extended to other countries after being improved there.

Arslan said research in recent years brought to light the inscription of the Parliament building in Assos.
He said, “This building in Assos was built by Ladomos and his wife, members of the one of leading families in the ancient city. The inscription dates back to the end of the 4th century B.C. Our examination shows that it is not the same with other examples in Anatolia. Unlike other Parliament buildings, these seats are made of wood in this building. It is stone in other assemblies. When you consider its plan, the nearest example to the Parliament in Assos is the one in the Athens agora, where people gathered to discuss administration, politics and trade affairs.” 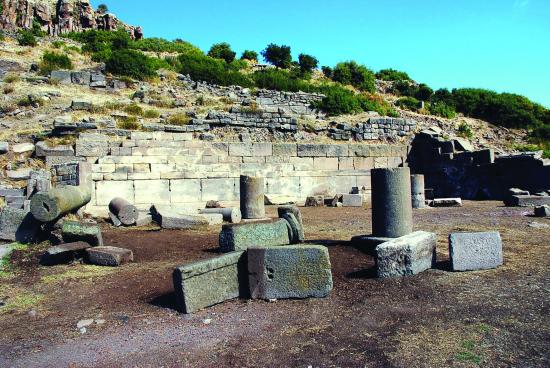 Arslan said the illustrious philosopher Aristotle could be the reason for the establishment of the Parliament building in Assos. He said, “Because we know Aristotle stayed in Assos in the middle of the 4th century. We can also say Plato’s second academy was also established here. One is in Athens and the second branch is in Assos. Thanks to this academy, the people of Assos received significant information about democracy or the regime in Athens. After Aristotle left the city, this region was occupied by the Persians and people did not have the chance to realize this information in real life, in a manner quite like Aristotle’s forms. But when Alexander the Great set foot in Anatolia, the people of Assos realized the doctrines of Aristotle and built the first Parliament building in Anatolia.”

He noted the Parliament building dated back to 2,400 years ago, and said, “We can say Assos was the first city in history to be managed by philosophers.”