Nestled within a basin and surrounded on three sides by ridges of the Cordillera Negra Mountains of north-central Peru, the tiny village of Cosma stands out with rows of pastel colored, closely-packed buildings—teal, yellow, white, lime-green, red—an assortment of colors that many in the U.S. might associate with a beach town. It closely connects to another small settlement known as Collique. Separated only by a five-minute walk on a dirt road, together these villages total only about 80 people; and much like many other small rural communities in this part of Peru, the people here are mostly farmers and pastoralists—their richly cultivated lots and fields can be seen nearby. But recently they have been playing host to a small team of archaeologists, students and volunteers who are excavating evidence of a civilization that left its mark here perhaps more than 3,000 years ago.

It began almost by accident.

"I was revisiting prehistoric sites in the upper Nepeña Valley originally surveyed by Richard Daggett and Donald Proulx in the 1970s," says Kimberly Munro, an Andean archaeologist and PhD student in Geography and Anthropology at Louisiana State University. Munro has been excavating and conducting research in Peru, primarily in the highland areas. "These sites were mostly ridge-top occupations, and based on Daggett’s report, showed evidence of highland-coastal interaction; a topic of interest for me for my own dissertation research.”  A local school principal from the town of Salitre clued her in to a “large Inca site and a hilltop fortress known as Iglesia Hirca” near Cosma. She decided to explore the tip.

“There is no public transport up the mountain to the town of Cosma, so we had to hitch a ride with the delivery truck that goes up once a week with the community’s supplies,” said Munro. “We were riding up on the top of the truck and when it took that last bend in the road before Cosma, I caught a glimpse of Karecoto [the local name of a large mound] for the first time—and honestly couldn’t believe what I was seeing. I knew it wasn’t natural, or Inca, and its massive size and composition was reminiscent of [ancient Peruvian] highland centers. Even though we were in the upper reaches of the coastal valley, we were still in a coastal valley, and this was something different from what we had seen throughout the rest of Nepeña.”

What Munro saw was actually one of several ancient sites that, together, bespoke a possible associated complex of structures with beginnings at least as long ago as ancient Peru’s “Early Horizon” period (900 – 1 BCE). She knew this after her inspection of the mounds and survey of surface ceramics and other finds at the sites during the summer of 2013: “From the density and styles of the ceramics, and the different archaeological components, I believe Cosma has been continuously occupied since at least the Early Horizon.”

The largest of the three mounds in the complex, Karecoto, measures about 250 meters long and 70 meters wide, and features an underground gallery and truncated top. The top is flat, and Munro describes its location as including walls and domestic structures surrounded by what appear to be prehistoric canals. About 600 meters south of the large mound and across a ravine is a smaller mound, known as Ashipucoto, which features signs of exposed architecture at its top due to looting. Above Ashipucoto to the south is a ridgeline that supports what is interpreted as the domestic area of the site and, following the ridgeline about 1,000 meters up is an Inca occupation known as Caja Rumi, which features large boulders, more ancient terraces, and more domestic walls and architecture. Finally, perched atop an opposite ridge overlooking Karecoto and the village of Cosma is the third mound known asKunka, and Iglesia Hirca, a hilltop fortress-like structure. The three mounds, excluding the Inca occupations, are tentatively dated by Munro to the Early Horizon Period. View of the Karecoto and Ashipucoto mounds relative to each other within the research area.Photo credit Kimberly Munro. 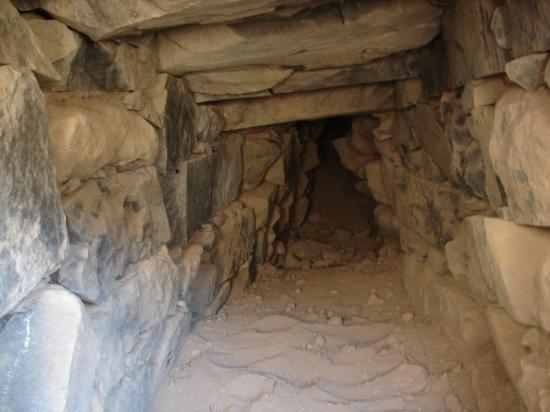