An international team of archaeologists has uncovered remains of a massive Iron Age period fortification wall and enclosure at the coastal archaeological site known as Ashdod-Yam, in Israel. 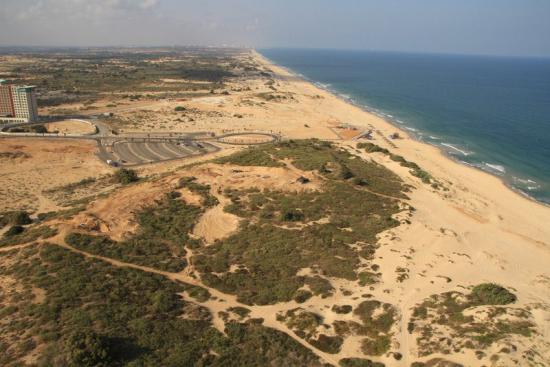 Aerial photograph of the southern part of the site – the fortified enclosure from the Iron Age IIB (930 - 587 BCE), looking south, taken in 2013 (photographed by Pascal Partouche, Skyview Photography)

Located on the Mediterranean coast within the southern boundaries of the modern city of Ashdod and about 5 km northwest of Tel Ashdod, a related archaeological site, the site contains the remains of a fortified settlement that likely abutted a port facility that played a strategic and commercial role under ancient Assyrian dominance and control during the 8th and 7th centuries BCE.

“The fate of Ashdod-Yam was always connected to the capital city of Ashdod, one of the five major Philistine cities during the Iron Age,” said excavations Director Dr. Alexander Fantalkin of Tel Aviv University. “In Byzantine times, as is evident from the 6th century AD Madaba mosaic map and a number of historical sources, the coastal city of Azotos Paralios(Ashdod-Yam) became more important than its former capital Azotos Hippenos (Ashdod), known also as Azotos Mesogaios. It seems that this shifting of the region’s center of gravity from Ashdod to Ashdod-Yam can be detected much earlier, perhaps already during the Iron Age, following the uprising of Yamani, the rebel king of Ashdod against the Assyrians, and the destruction of Ashdod in 712/711 BCE [by the Assyrians]."

Aerial photograph of the site of Ashdod-Yam, taken in 1944 (courtesy of the Survey of Israel)

The Iron Age fortified enclosure, the subject of current renewed excavations, was actually tested archaeologically between 1965 and 1968 under the directorship of Jacob Kaplan on behalf of the Museum of Antiquities of Tel Aviv-Jaffa. These early, more limited excavations exposed some elements of the enclosure wall and uncovered pottery finds of locally-produced and Phoenician origin, helping to date the compound to the 8th – early 7thcenturies BCE.  Fantalkin’s renewed excavations, which began in 2013, will be more extensive.

“Following the first season of renewed excavations undertaken in the summer of 2013, the remains of massive ancient fortifications have been rediscovered,” continued Fantalkin. “The construction, however, appears too impressive to have been done in a hurry and the fortifications were probably erected in order to protect a man-made harbor, created either before the rebellion or slightly afterwards. During the period of Assyrian domination, Ashdod-Yam became one of the most important Assyrian international emporia at the empire’s Mediterranean frontier.”

Area B of the current excavations: Iron Age IIB (930 - 587 BCE) mud-brick fortification wall, a view to the southeast (photographed by Philip Sapirstein) 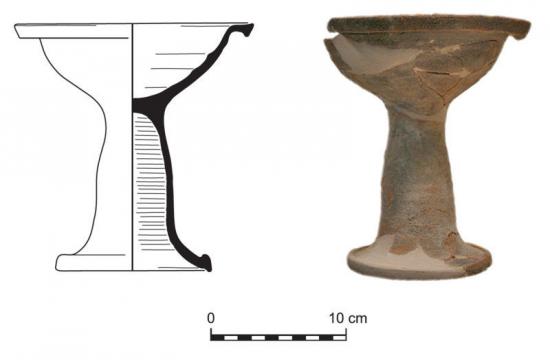 One of the chalices found near the Iron Age IIB (930 - 587 BCE) mud-brick fortification wall(photographed by Pavel Shrago, drawn by Yulia Gottlieb)

Fantalkin said that remains from the Hellenistic period were also discovered. “These buildings were found destroyed as a result of an earthquake, most probably accompanied by a palaeo-tsunami.”

In 2015, the team will continue excavations, particularly on the inside of the enclosure. The southern part of the enclosure features a mound of earth, which Fantalkin suggests might be significant. “Kaplan has reasonably suggested that this mass of earth probably conceals the remains of the 'citadel' of Ashdod-Yam. If so, this artificial mound may supply us with stratigraphically positioned remains for both the late 7th century BCE and the late 8th – early 7th centuries BCE settlements.”

“We shall also attempt to locate a man-made harbor at Ashdod-Yam and clarify the nature of Hellenistic occupation,” Fantalkin adds. “The excavations will shed light on the modes of Assyrian imperial control of subjected areas, clarifying the nature of interaction between different peoples in the Mediterranean melting pot at Ashdod-Yam.” 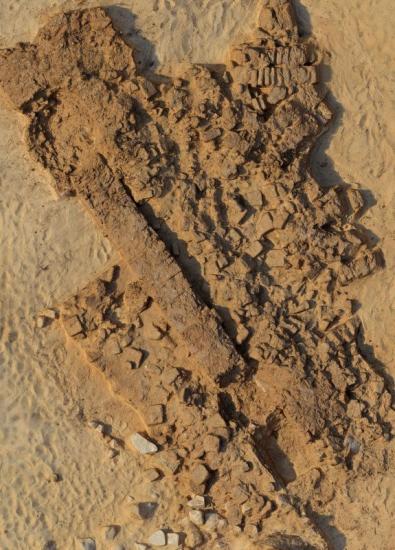 Area A of the current excavations: The traces of collapse of a mud-brick structure from the Hellenistic period (photographed by Pascal Partouche, Skyview Photography) 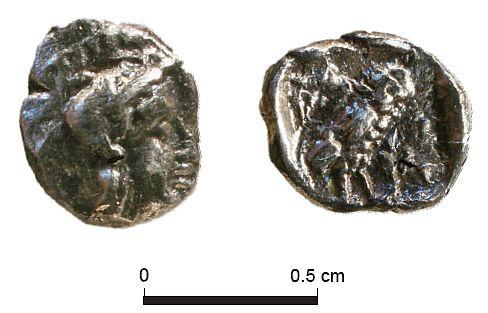 Found in Area A: Note the dimensions of a previously unattested type of the Philistine Athenian-styled silver coin, most probably minted in Ashdod in the late 5th - early 4th centuries BCE (photographed by Pavel Shrago)

Individuals and institutions interested in joining the excavations may visit the project website and the Registration and Housing Form for more information.

Ashdod-Yam's excavation project is a joint venture of the Institute of Archaeology at Tel Aviv University and the Institut für Alttestamentliche Wissenschaft of the University of Leipzig, with many additional partners from Israel and from abroad. The Ashdod-Yam archaeological project intends to study the archaeology and history of this site in the years to come. The project welcomes volunteers and institutions from all over the world. Various options for affiliations with the project can be arranged (such as independent volunteers, organized groups of volunteers and/or students; research-related affiliation; etc). As the project is, by definition, an inter- and multi-disciplinary endeavor, the project staff welcomes people with diverse research interests and perspectives.