Back in 1991, archaeologists unearthed the frozen body of a man who died some 5,300 years ago in the Alps. 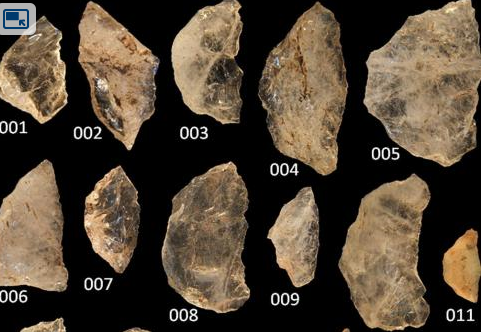 A collection of ancient arrowheads.

Nicknamed Otzi, for his resting place in the Ötztal Alps, the "Iceman" was outfitted with a copper ax, flint knife and bearskin hat, a surprise to archaeologists because they all were so well-crafted. His bow and 12 arrows, two of them nicely feathered and tipped with flint points, were likely less surprising, because they nicely fit with the then-current story of the bow and arrow's origins.

"The invention of the bow and arrow used to be closely linked to the late Upper Paleolithic (Stone Age) in Europe," less than 30,000 years ago, says anthropologist Marlize Lombard of South Africa's University of Johannesburg, in a study in the current Journal of Archaeological Science.

Last year, however, Lombard and her colleagues reported in the journal Antiquity, that arrows were around at least 64,000 years ago, and were first discovered not in Europe, but in South Africa. A single quartz arrowhead, bloodstained, had turned up at the Sibudu Cave site, dating to that time. In the new Journalof Archaeological Science study, Lombard reports more arrowheads and more evidence pushing back the age of the bow and arrow.

Why does it matter? Well, modern-looking humans turn up in fossils from as long as 195,000 years ago in Africa, but only spread worldwide starting about 60,000 years ago. Anthropologists have debated for decades about the innovations or changes, everything from language to genes to tools, that turned modern man loose on the world.

Arrows are one possibility for what helped people spread all over the world, either through hunting or fighting, as Lombard cautiously notes. "Although the existence of bow and arrow technology (more than 60,000 years ago) may have far-reaching consequences for hypotheses about human behavioural evolution and adaptation, it is by no means easy to establish," she says at the beginning of her study. In the study, she looks through the microscope at 16 quartz blades found in dirt layers as much as 65,000 years old at the South African site.

All but two of the ancient blades have blood traces on them and nine were deliberately hafted, or chipped, to fit onto a tool, she finds. More than half of the blades look like they were attached to arrows and eight carry traces of blood stains, Lombard concludes. "It is therefore my reading that at least nine tools in this sample were probably used as transversely hafted arrowheads."

The others may have been blades used to butcher animals, she suggests, or fitted onto barbs or darts.

"I think the finding adds to growing evidence for the great antiquity of complex projectile weaponry in Africa," says paleoanthropologist John Shea of Stony Brook (N.Y.) University. "The real startling upshot of this finding is that it challenges longstanding archaeological beliefs that important changes in projectile technology only occurred very recently, less than 30,000 years ago, after humans dispersed into Europe."

In North America, Shea adds, "it also challenges the longstanding hypothesis that the bow and arrow were only invented a few thousand years ago and largely in conjunction with the origins of agriculture."

Even after prehistoric people invented arrows, they likely kept on using spears as well, Lombard suggests. Hunters in Africa still use spears to run down wildebeest and zebra, while using arrows only during part of the year to hunt for giraffe, eland, hartebeest and springbok. So, she concludes, archaeologists shouldn't be surprised when they find both heavier spear points and arrowheads mixed together at future archaeological digs.

" Complex projectile technology may have given our species a crucial ecological advantage in competition with other hominin (human) species as they dispersed from Africa," Shea says, by e-mail. That's one explanation for the disappearance of the Neanderthals, who have left only spear points behind at sites in Europe. Outgunned by modern humans and their arrows, the (literal) "killer app" of its day, the Neanderthals weren't able to compete for game and faded from the archaeological record (if not completely from our genes) about 30,000 years ago.

And the age of the bow and arrow may go further back, Shea says. "My own personal hunch is that the bow and arrow dates to at least 100,000 years ago based on stone tools found at sites in Ethiopia, Kenya and neighboring countries."

No wonder Otzi had such nice arrows. Archery was an ancient technology in his day. Unfortunately for the Iceman.

After a puncture wound was discovered in Otzi's left shoulder a decade ago, researchers at Italy's South Tyrol Museum of Archaeology, X-rayed the wound and found what had killed the Iceman— a flint arrowhead that severed a major artery and likely paralyzed his arm. "The Iceman probably bled to death within a matter of minutes," the museum notes, because of the arrowhead.