Archeologists claim to have found a forerunner to the pyramids not in Egypt - but in Europe in southern Romania.

The find being hailed as a sensation has been dated as being over 4500 years old after it was unearthed in Aricestii Rahtivani, in Prahova county in southern Romania.

Archeologist Alin Franculeasa, from the History and Archeology Museum in Prahova, said: "If we take the tomb of Egyptian pharaoh Tutankhamen - he reigned between 1333–1323 BC, but this tomb is even older - from a man who obviously also had great wealth and importance but who would have lived 4500 years ago.

"There are clearly similarities between the tomb we are looking at and that of the pyramids. 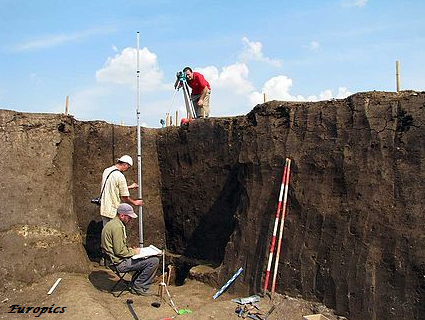 "Obviously both are funeral monuments and this tomb also had an outside cover that would have been made of earth blocks, and not stone, it was also smaller, some 3 meters high and going into the ground by a meter.

"There were buried corridors and it was made using tools made of stone, wood and bronze so with a fair level of sophistication for the time.

"Inside was the body of a mature man, who must have been an important person of a high rank to have such a tomb." 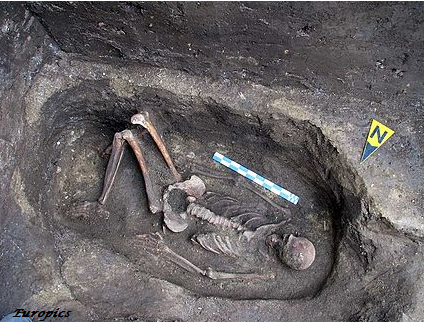 But she added that if the tomb had not been robbed then it was rather austere in comparison to the riches found in the tombs of the pharaohs.

"The bodily remains have been taken to anthropological investigations, to establish exact age, possible illnesses that could be told based on the bones."

Archeologist Alin Franculeasa added that it dates back to the Bronze Age and the man was part of a semi-nomad community from southern Ukraine, who would probably have lived from raising domesticated animals.

The skeleton was found in the fetal position, in a 60cm diameter tomb.