Ardipithecus ramidus had a skull fit for a hominid 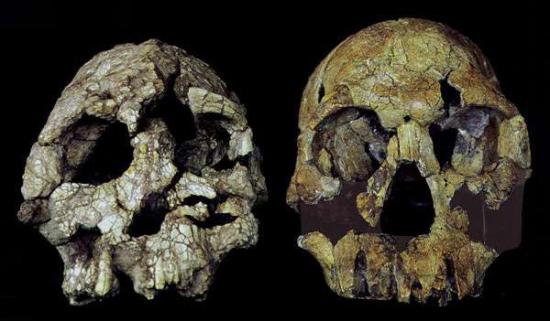 One of the most controversial proposed members of the human evolutionary family, considered an ancient ape by some skeptical scientists, is the real hominid deal, an analysis of a newly reconstructed skull base finds.

By 4.4 million years ago, Ardipithecus ramidus already possessed a relatively short, broad skull base with a forward-placed opening for the spinal cord, an arrangement exclusive to ancient hominids and people today, William Kimbel of Arizona State University in Tempe reported on April 11 at the American Association of Physical Anthropologists annual meeting.

Although features of the skull’s floor evolved substantially in Homo species leading to modern humans, Kimbel said, those changes appeared in piecemeal fashion starting at least a couple of million years earlier in hominids such as Ardipithecus.

A. ramidus is best known by the partial skeleton of an adult female, dubbed Ardi, described in a set of papers published in 2009 (SN: 10/24/09, p. 9). Elements of Ardi’s build related to tree climbing, such as grasping feet and an elongated lower hip bone, have raised suspicions that she and her kind come from apes that evolved a rudimentary ability to walk upright without being hominids. However, Ardi’s discoverers argue that she’s a hominid whose species split time between slow, awkward walking and shuffling along tree branches while grabbing upper branches for support.

The new skull reconstruction, which fits that view, relied on a partial A. ramidus skull base reported in 1994, long before Ardi’s remains were painstakingly removed for analysis from rock that had encased the partial skeleton in Ethiopia.

By examining 79 skull bases of chimps, gorillas, modern humans and ancient hominids, Kimbel’s group identified relationships among anatomical landmarks that distinguish apes from people and hominids. The researchers estimated the total length of A. ramidus’ skull bottom and found that it fell within a range characteristic of hominids, not apes.

As in more recent members of the Australopithecus genus, such as the 3.2-million-year partial skeleton nicknamed Lucy, Ardipithecus ramidus displays a relatively short, humanlike skull base, Kimbel said.

A new 3-D analysis of Ardi’s previously reconstructed pelvis, also presented April 11 at the anthropology meeting, finds a mix of monkey, ape and hominid characteristics. Although not confirming a consistently upright gait, this version of Ardi’s hips doesn’t undermine her proposed hominid status, said Nicole Webb of City University of New York, who led the research.

As for Ardi’s disputed mode of travel, she probably had a two-legged gait “but didn’t use her hands much while upright,” said Caley Orr of Midwestern University in Downers Grove, Ill., who didn’t participate in the new research.

For more on Ardipithecus ramidus: [Go to]