A setback for Neanderthal smarts ? 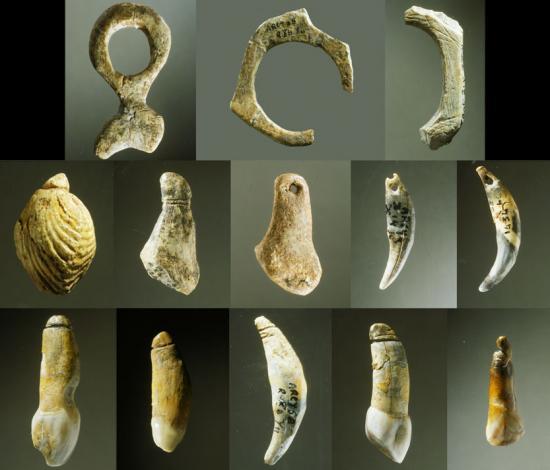 Who made these? Ornaments long attributed to Neandertals might have been made by modern humans instead.

Neandertals are looking sharp these days. Many researchers now credit our evolutionary cousins, once regarded as brutish and dumb, with "modern behavior," such as making sophisticated tools and fashioning jewelry, a sign of symbolic expression. But new radiocarbon dating at a site in France could mar this flattering view. The study concludes that the archaeological layers at the site are so mixed up that ornaments and tools once attributed to Neandertals could actually be the work of modern humans, who lived in the same cave at a later date.

One prominent researcher even argues that this celebrated site, the Grotte du Renne (literally "reindeer cave") at Arcy-sur-Cure in central France, should now be eliminated from scientific consideration. "This key site should be disqualified from the debate over [Neandertal] symbolism," says Randall White, an archaeologist at New York University. But João Zilhão, an archaeologist at the University of Bristol in the United Kingdom who has often tussled with White and other researchers over the evidence from the Grotte du Renne, says that the new study "prove[s] the exact opposite of what [its] authors claim."

The Grotte du Renne was excavated between 1949 and 1963 by the late French prehistorian André Leroi-Gourhan, who found 15 levels of hominid occupation ranging from about 45,000 to 28,000 years ago. This period includes the overlapping occupation of Europe by Neandertals, who show up about 130,000 years ago and disappear no later than 30,000 years ago, and modern humans, who arrived in Europe between 45,000 and 40,000 years ago and stayed for good.

In the new study, published online today in the Proceedings of the National Academy of Sciences, a team led by dating expert Thomas Higham of the University of Oxford in the United Kingdom reports 31 new radiocarbon dates from the Grotte du Renne, using new filtration methods to purify radiocarbon samples and remove contamination by modern carbon sources, which has long plagued dating accuracy. The dates, obtained on materials such as bone tools and ornaments made of animal teeth, painted a disturbing picture: Whereas upper layers attributed to modern humans clocked in at no older than 35,000 years, artifacts from the Châtelperronian levels ranged from 21,000 years ago, when Neandertals were long extinct, to 49,000 years ago, before the Châtelperronian actually began. Indeed, Higham and his colleagues found that at least one-third of the Châtelperronian dates were outside the known time period of this culture.

The team concludes that the archaeological levels must have become mixed over thousands of years and that younger artifacts made by modern humans may have moved down into levels long thought to be associated with Neandertals. "The evidence from the Grotte du Renne ought to be viewed with extreme caution," the authors write.

The authors do not speculate on whether the layers became mixed through natural sedimentation processes or excavation errors that caused some artifacts to be assigned to the wrong occupation levels.

White says that the results should not be surprising, because Leroi-Gourhan's excavations took place "at a time when excavation techniques in general were rudimentary." He adds that only one other Châtelperronian site has produced personal ornaments, in much smaller numbers, meaning that claims that Neandertals were capable of such symbolic expression rests heavily on the evidence at the Grotte du Renne. But Zilhão counters that two-thirds of the dates are consistent with Neandertals having made the Châtelperronian. The other, outlying dates could be the result of contamination rather than mixing of artifacts among layers, he says.

Yet Higham, who has been redating nearly 20 other Neandertal and modern human sites in Europe, says that the Grotte du Renne is unique in producing such wildly varying dates. "I think this is telling us something," Higham says. "This site has some problems."