Advanced laser scanning technology has been used to create a permanent and lasting record of post medieval underground mines under the city of Bath, England.  The project by Oxford Archaeology, which was Highly Commended in the 2012 British Archaeological Awards, employed laser scanning specialists APR Services to capture highly accurate measurements of the  abandoned limestone workings at Combe  Down. The laser scanned measurements were used to create a permanent record of the internationally recognised heritage, wildlife and environmental site and inform stabilisation works to remove the very real threat to life and property posed by the unstable mine. 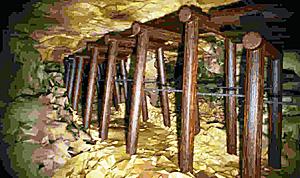 “It quickly became apparent that laser scanning was simply the only way to capture the vital information we needed to conserve this area for future generations while protecting the current population,” commented Ianto Wain, Head of Heritage Management at Oxford Archaeology. “APR completed a pilot study before the full survey was commissioned and the results more than exceeded our expectations.” “This use of laser scanning technology, as evidenced with the nomination in the 2012 British Archaeological Awards, was truly innovative and has paved the way for a number of other high profile applications of laser scanning in this field.”

A showcase for the best in British Archaeology, the 2012 British Archaeological Awards commendation for innovation recognised the contribution of the Combe Down Stone Mines Stabilisation Project to archaeological practice. The nomination was given as a reward for excellence in project design, experimental technique, imaginative investigation, innovative solution and resourcefulness.

“Many aspects of this project were challenging to say the least,” added Tony Rogers, Managing Director of APR Services, “the mines were so unstable that no access was allowed beyond the constructed roads and walkways and there was limited light and very cramped conditions. We therefore had to keep the scan process as simple as possible while protecting ourselves and our equipment yet capture as much detail as possible as quickly as possible.”

APR Services used their FARO Photon laser scanner to record millions of highly accurate measurements. This scanner was selected as it was light to carry, offered a fast rate of data capture with high accuracy over relatively short distances. APR Service processed the data using FARO Scene and Pointools to create point cloud models and a fully rendered fly-though animation of routes in the mine resulting in a full 25 minutes of animation which has been used at public events and will form the centrepiece of the archaeological galleries at the new Stone Mine museum.