Antrim (Irlande): discovery of bones could forever change what we know about the Irish

Ten years ago, an Irish pub owner was clearing land for a driveway when his digging exposed an unusually large flat stone. The stone obscured a dark gap underneath. He grabbed a flashlight to peer in.

"I shot the torch in and saw the gentleman, well, his skull and bones," Bertie Currie, the pub owner, said this week.

The remains of three humans, in fact, were found behind McCuaig’s Bar in County Antrim, Northern Ireland. And though police were called, it was not, as it turned out, a crime scene. 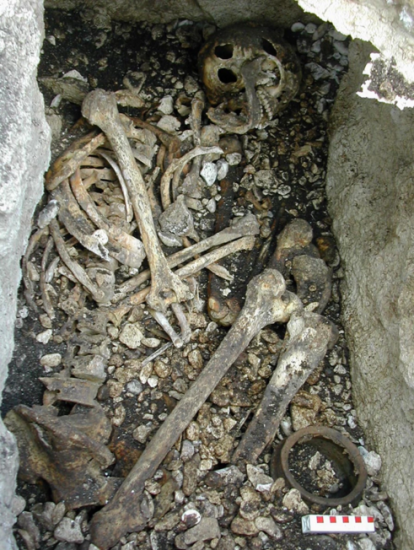 These bones were discovered behind McCuaig's Bar in County Antrim, Northern Ireland. A DNA analysis of them challenges conventional history. (Photo by Queen's University Belfast)

Instead, what Currie had stumbled over was an ancient burial that, after a recent DNA analysis, challenges the traditional centuries-old account of Irish origins. From as far back as the 16th century, historians taught that the Irish are the descendants of the Celts, an Iron Age people who originated in the middle of Europe and invaded Ireland somewhere between 1000 B.C. and 500 B.C. That story has inspired innumerable references linking the Irish with Celtic culture. The Nobel-winning Irish poet William Butler Yeats titled a book “Celtic Twilight.” Irish songs are deemed “Celtic” music. Some nationalists embraced the Celtic distinction. And in Boston, arguably the most Irish city in the United States, the owners of the NBA franchise dress their players in green and call them the Celtics.

Yet the bones discovered behind McCuaig’s tell a different story of Irish origins, and it does not include the Celts.

“The DNA evidence based on those bones completely upends the traditional view,” said Barry Cunliffe, an emeritus professor of archaeology at Oxford who has written books on the origins of the people of Ireland.

DNA research indicates that the three skeletons found behind McCuaig's are the ancestors of the modern Irish and they predate the Celts and their purported arrival by 1,000 years or more. The genetic roots of today's Irish, in other words, existed in Ireland before the Celts arrived. “The most striking feature” of the bones, according to the research published in the Proceedings of the National Academy of Science journal, is how much their DNA resembles that of contemporary Irish, Welsh and Scots. (By contrast, older bones found in Ireland were more like Mediterranean people, not the modern Irish.)

Radiocarbon dating shows that the bones discovered at McCuaig's go back to about 2000 B.C. That makes them hundreds of years older than the oldest artifacts generally considered to be Celtic — relics unearthed from Celt homelands of continental Europe, most notably around Switzerland, Austria and Germany.

For a group of scholars who in recent years have alleged that the Celts, beginning from the middle of Europe, may never have reached Ireland, the arrival of the DNA evidence provides the biological certitude that the science has sometimes brought to criminal trials. “With the genetic evidence, the old model is completely shot,” John Koch, a linguist at the Center for Advanced Welsh and Celtic Studies at the University of Wales.

The senior author of the DNA research paper, Dan Bradley of Trinity College Dublin, was reluctant to weigh in on the cultural implications, but he offered that the findings do challenge popular beliefs about Irish origins. “The genomes of the contemporary people in Ireland are older — much older — than we previously thought,” he said.

Exactly where this leaves the pervasive idea that the Irish and other people of the area are “Celtic” is unclear. It depends on the definition of Celtic. There are essentially two definitions — and two arguments.

The first revolves around language. The Irish language is, like Welsh and Scottish Gaelic, part of a group that linguists have labeled Celtic. The languages share words and grammar. They seem to have emerged after a similar evolution from Indo-European. They are indisputably related, and indisputably a well-defined category. What is unclear is whether the term “Celtic” is an appropriate name for that group of languages. To be sure, some think that Celtic languages originated with the Celts on continental Europe and subsequently spread to Ireland, Wales and Scotland. This is the traditional view, and it dovetails with the idea that the Celts moved into Ireland during the Iron Age. But over the last decade, a growing number of scholars have argued that the first Celtic languages were spoken not by the Celts in the middle of Europe but by ancient people on Europe’s westernmost extremities, possibly in Portugal, Spain, Ireland or the other locales on the western edges of the British Isles.

Koch, the linguist at the University of Wales, for example, proposed in 2008 that “Celtic” languages were not imports to the region but instead were developed somewhere in the British Isles or the Iberian Peninsula — and then spread eastward into continental Europe. His doubts about the traditional view arose as he was studying inscriptions on artifacts from southern Portugal. The inscriptions on those artifacts strongly resembled the languages known as Celtic, yet they dated as far back as 700 B.C. This placed Celtic languages far from the Celt homelands in the middle of Europe at a very, very early date. “What it shows is that the language that became Irish was already out there — before 700 B.C. and before the Iron Age,” Koch said. “It just didn’t fit with the traditional theory of Celtic spreading west to Britain and Iberia.”

The second line of argument arises from archaeology and related sources.

Numerous digs, most notably in Austria and Switzerland, have traced the outlines of the Celts. The artifacts offer evidence going back as far as about 800 B.C. The ancient Greeks and Romans also left written accounts of the Celts, and probably knew them well — the Celts sacked Rome around 390 B.C. and attacked Delphi in Greece in 279 B.C. It seemed plausible that this group that had invaded Rome had invaded Ireland as well, and in the standard view, it was this people that eventually made it to Ireland.

For decades, however, archaeologists and other scholars have noted just how flimsy the evidence is for that standard account and how broad, nonetheless, is the application of the word. In 1955, an Oxford professor, J.R.R. Tolkien, better known as the author of "The Hobbit" and "The Lord of the Rings" novels, described the popular understanding of "Celtic" in a celebrated lecture: “‘Celtic’ of any sort is ... a magic bag into which anything may be put, and out of which almost anything may come.... Anything is possible in the fabulous Celtic twilight, which is not so much a twilight of the gods as of the reason.” Moreover, in recent years, some archaeologists have proposed that the traditional story of the Celts' invasion was, in a sense, exactly wrong — the culture was not imported but exported — originating on the western edge of Europe much earlier than previously thought and spreading into the continent.

In a 2001 book, Cunliffe, the Oxford scholar, argued on the basis of archaeological evidence that the flow of Celtic culture was opposite that of the traditional view — it flowed from the western edge of Europe, what he calls “the Atlantic zone” — into the rest of the continent. In many places of the Atlantic zone, he notes, people were buried in passages aligned with the solstices, a sign that they shared a unified belief system. “From about 5,000 B.C. onwards, complicated ideas of status, art, cosmology were being disseminated along the Atlantic seaways,” Cunliffe said, and that culture then spread eastward. “If we’re right, the roots of what is known as ‘Celtic’ culture go way way back in time,” Cunliffe said. “And the genetic evidence is going to be an absolute game-changer.”

This heat map shows how the DNA taken from the 4,000-year-old bones discovered in Northern Ireland relates to DNA of modern European populations. The red coloring over the British Isles indicates that the bones are most like the modern populations there. (From the Proceedings of the National Academy of Sciences.)

If the new scholarship proves correct, exactly what to do with the word Celtic will probably be a matter of some dispute: Should it be applied to languages or cultures that, no matter how clearly defined, were largely uninfluenced by the historical Celts of continental Europe?

Complicating any answer are old ethnic antagonisms: The old notions of a distinct “Celtic race” or “Irish race” have been used not just for poetic tributes, but for scorn.

The famed American anthropologist Daniel Garrison Brinton, for example, described the Celts in 1890 as having conspicuous mental traits: “turbulent, boastful, alert, courageous, but deficient in caution, persistence and self-control, they never have succeeded in forming an independent state, and are a dangerous element in the body politic of a free country. In religion they are fanatic and bigoted, ready to swear in the words of their master rather than to exercise independent judgment.”

The new evidence from genetics, however, undermine notions of a separate Irish race, describing them instead as one sliver of the European spectrum. According to the genetic research, the Irish are at the extreme end of a genetic wave that washed across Europe, a wave of migrants that swept westward from above the Black Sea across Europe about 2,500 B.C. That wave of migration had been documented in previous research led by David Reich at Harvard University, but it was unclear whether it had extended all the way to Ireland. The Y chromosome and other aspects of the DNA in the bones found behind McCuaig’s, however, link the Irish to that surge of population. “The way to think about genetic variation in Europe is that it is more of a gradient than it is of sharp boundaries," said Bradley, the DNA researcher. "Sometimes, cultural features like language and natural borders can coincide with genetics, but most times not. Genetics is fuzzy, and it doesn't follow political and cultural borders."

Even so, some experts warned that the new findings will disappoint many who would prefer a simpler answer to the question Irish origins. "The public will always want a place on the map and for someone to point and say, 'This where the Irish are from,' " said J.P. Mallory, an emeritus professor of archaeology at Queen's University Belfast and the author of a book, "The Origins of the Irish.""But there’s going to be no way to do that. These groups were frequently traveling east-west across Europe, from one place to another. Everyone is a mix.”