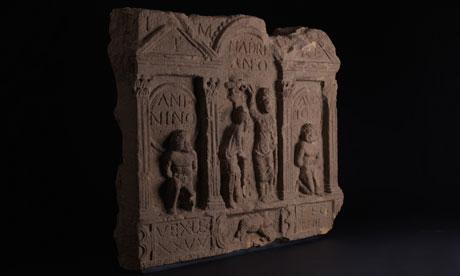 A distance slab of the XX legion, recording the completion of 3,000 feet, from the exhibition at the newly reopened Glasgow Hunterian Museum. Photograph: Photounit/The Hunterian

One of the Roman empire's most enigmatic monuments – the Antonine wall between the firths of Forth and Clyde in Scotland, which briefly marked the northernmost point of the empire between the 140s and 160s AD – is set to reveal some of its secrets.

The elaborately carved sculptures from the wall, brought together for the first time, form the centrepiece of a new gallery at the Hunterian Museum in Glasgow, which has reopened after two years' refurbishment.

The Antonine wall was built early in the reign of Antoninus Pius, Hadrian's successor as emperor, who pushed the Roman border north from Hadrian's wall in order to secure a military victory that would play well back in Rome. According to the director of the Hunterian, Professor David Gaimster: "It was an act of propaganda by an emperor who had not held any significant military command, and its success ensured his position."

The soldiers of the II Augusta, VI Victrix and XX Valeria Victrix legions who built the mighty turf wall – many parts of which can still be seen – carved elaborate "distance slabs" commemorating the sections they had built.

The sculptures are, in general, more elaborate and richly decorated than their counterparts on Hadrian's wall, featuring such scenes as Victory placing a laurel wreath on a Roman legionary standard, and the distinctive mascots of the soldiers' legions: a running boar for the XX; a Pegasus and a Capricorn (after the Emperor Augustus's star sign) for the VI.

The sculptures also clearly project the move north as a splendid military victory: several depict Caledonians being trampled by Roman cavalry, or simply crouching in submission, bound and naked.

The northernmost tip of the empire is frequently imagined as an inhospitable, barbarous zone for its occupiers – but that image is far from the truth, according to Gaimster. The occupiers were, he said, enjoying "as sophisticated a Mediterranean lifestyle as legionaries would have done anywhere else in the empire".

For example, there were bathhouses along the wall, including in what is now the Glasgow suburb of Bearsden, where research has shown the occupiers were eating a diet including olives, figs and wine. Also in the new gallery are fragments of a richly decorated mausoleum found near Kirkintilloch, carved with images of togaed figures reclining on couches. Other objects include precious fragments of glass, delicate intaglios, red Samianware for dining, and – as fresh as the day they were made – adult and children's leather sandals. There is also a hint towards the multi-ethnic makeup of the Roman occupiers: a 15-year-old Middle Eastern boy called Salamenes died near Kirkintilloch, and his tombstone was erected by his father. A single woman – Verecunda – is recorded by her tombstone.

Indeed, the indigenous aristocracy seemed to be enjoying prestige goods from the Roman world before the area was annexed. An Iron Age settlement at Leckie in Stirlingshire has yielded finds of Roman Samianware, glass and a delicate mirror.

Sixteen of the 19 surviving distance slabs have been put on display. The missing three – one is in Edinburgh's National Museum of Scotland, one at Glasgow's Kelvingrove art gallery, and one, having been sold to America, perished in the 1896 fire in Chicago – are represented by casts.

They have all had a richly varied history since their brief service for Rome in the second century. Several were acquired by Scottish antiquaries, and given to the University of Glasgow as early as the turn of the 17th and 18th centuries, before the Hunterian was founded in 1807. One was seen built into the side of a cottage in 1603, and another turned up in a farmer's field in 1969, and Emeritus Professor Lawrence Keppie, an expert on the wall, remembers one of his first jobs at the museum: cleaning off the whitewash with which had been splashed during its sojourn in the farmyard.