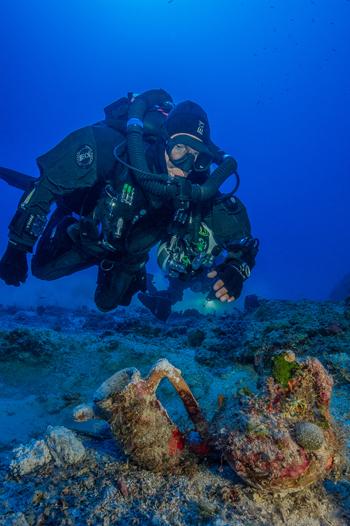 Archaeologists excavating the famous ancient Greek shipwreck that yielded the Antikythera mechanism have recovered more than 50 items including a bronze armrest (possibly part of a throne), remains of a bone flute, fine glassware, luxury ceramics, a pawn from an ancient board game, and several elements of the ship itself.

“This shipwreck is far from exhausted,” reports project co-Director Dr. Brendan Foley, a marine archaeologist with the Woods Hole Oceanographic Institution (WHOI). “Every single dive on it delivers fabulous finds, and reveals how the ‘1 percent’ lived in the time of Caesar.”

The shipwreck dates to circa 65 B.C., and was discovered by Greek sponge fishermen in 1900 off the southwestern Aegean island of Antikythera. They salvaged 36 marble statues of mythological heroes and gods; a life-sized bronze statue of an athlete; pieces of several more bronze sculptures; scores of luxury items; and skeletal remains of crew and passengers. The wreck also relinquished fragments of the world’s first computer: the Antikythera Mechanism, a geared mechanical device that encoded the movements of the planets and stars and predicted eclipses. 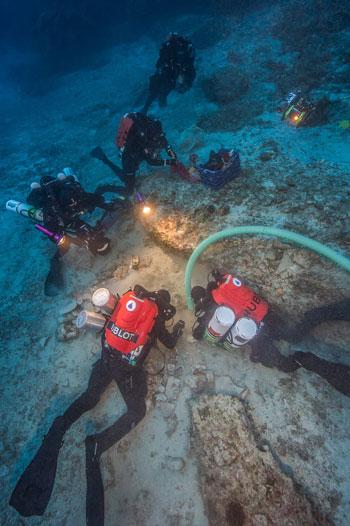 The 2015 expedition is part of a long-term research program at the site, which began in 2014. It was the first scientific excavation of the wreck, and launched the first comprehensive study of all of its artifacts. During the new multi-year program the team expects to recover artifacts and ancient artwork still buried in the seafloor, and recreate the history of the ship’s exquisite cargo and its final voyage.

During an expedition mounted in 2014 the researchers created a high-resolution, 3D map of the site using stereo cameras mounted on an autonomous underwater vehicle (AUV). Hampered by bad weather, the expedition included just four dive days for professional technical divers who recovered a series of finds on the surface sediment and proved that much of the ship’s cargo is indeed still preserved beneath the sediment.

By contrast, this year’s expedition included 40 hours of bottom time, with four professional archaeologists diving the site and performing controlled excavation to the highest scientific standard with specially designed equipment, and with the guidance of an exquisitely precise multi-dimensional map of 10,500 square meters of sea floor.

In addition to Foley, the 2015 exploration at Antikythera was conducted by the Greek Ephorate of Underwater Antiquities under director Dr. Ageliki Simosi and field archaeologists Dr. Theotokis Theodoulou and Dr. Dimitris Kourkoumelis.

The international team was in the field from 26 August to 16 September, following an autonomous robotic mapping effort conducted from 8-15 June in partnership with the University of Sydney, Australia. The project is the first-ever systematic excavation of this shipwreck, relying on the precise large-area map created by the robotic survey. Notably, this project marked the first time in the century since the wreck’s discovery that archaeologists were able to join specialist divers in descending to the 55-meter (180 feet) deep site. The ten-man dive team used advanced technical diving equipment including closed-circuit rebreathers and trimix breathing gases, performing 61 dives in 10 days of diving on the wreck. A remotely operated vehicle (ROV) monitored and recorded all diving activities, and served as a communications link between divers and support personnel on the surface.

The 2015 expedition has left the team with the best understanding yet of this unique shipwreck and its cargo. A metal detection survey of the site revealed that metallic targets are dispersed over an area of about 40x50 meters. This is thought to match the wreck’s debris field, indicating the vast size of the ship that sank off the forbidding cliffs of Antikythera.

Metal detectors revealed the presence of buried objects throughout the wreck site. The dive team recovered items including an intact amphora; a large lead salvage ring; two lead anchor stocks (possibly indicating the ship’s bow); fragments of lead hull sheathing; a small and finely formed lagynos (or table jug); and a chiseled rectangular stone object (possibly the base of a statuette) perforated by 12 holes and filled with an as-yet-unidentified substance.

During the project, the dive team carefully excavated a series of nine trenches in the seabed using a water dredge powered by a submersible pump. The divers recovered more than 50 artifacts, most deeply buried beneath a thick layer of coarse sand and massive deposits of broken ceramics. From among these fragments, the team recovered wooden remains from the hull of the ship; a section of bronze furniture, perhaps from a throne; part of a bone flute; a glass “chessman” board game element; bronze nails from the ship’s planks; and portions of bronze, iron, glass and ceramic objects.

“We were very lucky this year, as we excavated many finds within their context, which gave us the opportunity to take full advantage of all the archaeological information they could provide,” states diving archaeologist Dr. Theodoulou.

The team created 3D virtual reconstructions of many artifacts on the seafloor, and 3D-modeled all of the major recovered artifacts once on shore. A series of scientific analyses are now being conducted on these artifacts, including ancient DNA analysis of ceramic jars to identify the 2,000 year-old food, drinks, perfumes, and medicines contained in them. Isotopic analysis of lead objects will determine where the lead was mined, to reveal the home port of the ship.

Previously recovered artifacts from the Antikythera Shipwreck will be displayed in a special exhibition “Der Versunkene Schatz das Schiffswrack von Antikythera” [The Sunken Treasure of the Antikythera Shipwreck] at the Basel Antiquities Museum in Switzerland from 27 September 2015 to 27 March 2016. This is the first time that these ancient treasures have been allowed to leave the National Archaeological Museum in Athens.