“Reading the bones” is being given a new twist for a group of people who lived on the Caribbean island of Antigua more than 200 years ago using the Canadian Light Source (CLS) synchrotron at the University of Saskatchewan (U of S).

Treena Swanston, a post-doctoral fellow at the U of S and Tamara Varney, an archaeologist at Lakehead University in Thunder Bay are working with staff scientists at the CLS, as well as Swanston’s supervisor U of S Canada Research Chair in Synchrotron Bone Imaging David Cooper, and Antigua’s national park service. 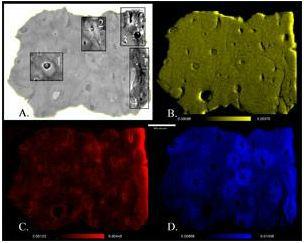 Microscopic images of a bone fragment. A conventional histological image (A) highlights regions of interest with corresponding element scans from the CLS of calcium in yellow (B.), lead in red (C.) and strontium in blue (D.). Source: Swanston et al., 2012

Using the presence of trace amounts of lead and strontium as clues, the team is using the CLS to hunt for the presence of these elements in tiny shards of bones from sailors and others interred in a Royal Navy cemetery in the late 1700s to early 1800s. The work is published online in the Journal of Archaeological Science.

Bone is a living tissue, formed as we grow and healing after it breaks. It is also constantly being rebuilt and recycled by the body. As new bone is laid down, there is the chance that metals in the body will be incorporated along with the usual calcium and phosphorous. The presence of those other metals can yield important insights into a person’s diet, what they did for a living, what medicines they might have used, and even how long they might have lived in a particular place. The challenge for researchers is to prove that the traces they are finding were incorporated into a person’s bones while he or she was alive and not the result of post-mortem contamination.

“We used the synchrotron to determine if the trace elements we were interested in were being taken up by the bone during life,” explains Swanston. “We were able to compare maps of elements with the bone histology (microscopic anatomy of cells and tissues) to differentiate between contamination and biogenic uptake.”

To collect the bones used in the study, Varney worked with National Parks Antigua at a cemetery threatened by a nearby development. To see if the synchrotron could differentiate between something deposited while the bone was being grown and not by contamination, the team decided to focus on two metals: lead, notorious for how it can hang around in the body, and strontium, an element that can also substitute for calcium in bone.

“Our other chemical analyses had indicated elevated levels of lead, but we couldn’t say if it was coming from contamination from the soil,” says Swanston. “Lead was very common in these people’s lives; used in everything from eating utensils to containers for storing water (Antigua has no sources of fresh water other than collecting rain in cisterns).”

Samples of bone scanned at the CLS showed concentrations of lead that could be matched with the micro-architecture of bone in conventional photographs of the same specimen. When the researchers looked at scans for strontium they found similar results. While neither a nutrient nor a toxic substance, strontium is interesting because people are exposed to it through their diet. Relative amounts of strontium could be an indicator of where a person came from – such as England or Africa. Evidence of episodes of strontium concentration even provided clues to what a person was doing, like spending time at sea as a sailor, or working on a sugar plantation.

“The interesting thing about this Royal Navy cemetery is that it wasn’t segregated like other cemeteries of the time would have been,” Swanston says. “So we also gain a social dimension that lets us look at the different ancestries and social determinants of health.”

The team is now expanding their research, looking to identify other metals that can be correlated in the same way in bones from this cemetery and others that provide further insights into the lives – and deaths – of their residents.